Cannondale this week launched their brand new Synapse Hi-Mod in Italy, on the same Strade Bianche that the bike first debuted in the professional race earlier this year. Regular readers will be familiar with the bike; we've spotted it a couple of times beneath the Cannondale team, most notably Peter Sagan, who won Gent Wevelgem, was second at Tour of Flanders and has chalked up numerous other victories and podium finishes (probably best we don't mention Peter and podium in the same sentence though).

The new Synapse is an 'endurance race' bike, something of a growing sector with the likes of the Trek Domane, BMC GF, the new Bianchi Infinito CV and of course the Specialized Roubaix. Cannondale's idea for this new Synapse is that it is designed for riders who enjoy the ride and aren't motivated so much by winning, but by riding fast and long distances, exploring new roads and enjoying a beer afterwards. If you don't safety pin a number to your jersey every weekend but still enjoy pushing yourself, then this could be the bike for you. Presumably, though, given that their team have been racing on them, if you do want to pin a number on too, it'll do the job too. 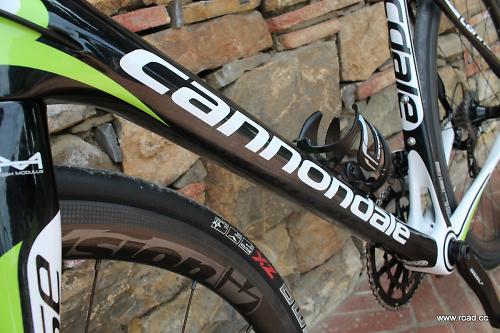 The result of three years of development, goals for this new bike rotate around it being stiffer than the previous Synapse, more compliant and with a better balance of of those two factors, and with a frame weight under 1,000g. It's a clean sheet of paper design, but has similarities with both the previous Synapse and the current SuperSix Evo. There's the curved seat tube from the Synapse and the pinched top tube and minimal dropouts from the Evo, but there are also some very new design features

It’s more than just an evolution of the previous Synapse, but carries over similar geometry cues, one of the critical differences between race and endurance/sportive bikes.  Cannondale likes an acronym or two, and they’ve coined S.E.R.G, which stands for Synapse Endurance Race Geometry. What it essentially boils down to is a geometry that’s a little taller in the head tube, about 3cm, and shorter in the top tube. This is to place the handlebars in a higher and more comfortable position for those without the flexibility of Peter Sagan. 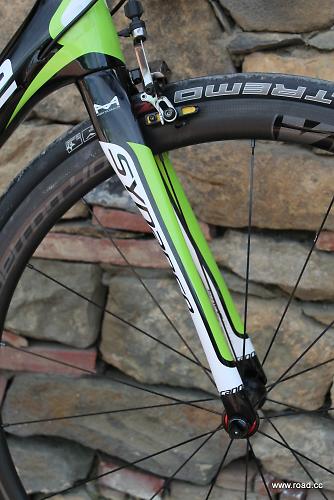 Some people scoff at tall head tubes, but the reality is that a lot of performance cyclists who don't race want a fast, stiff and light bike, but don’t want the discomfort forced from adopting an unrealistic position. And want a little extra comfort because their local roads are billiard table smooth. Aside from Peter Sagan, who gets as custom geometry, the rest of the team including Ted King have been riding stock size frames. Ted rides a regular 56cm frame. 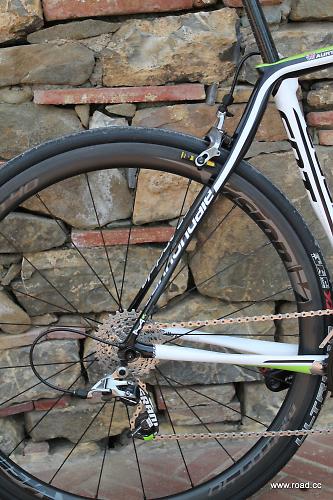 Improved compliance over the old Synapse was top of the list of goal. SAVE+ comprises three complementary micro suspension systems. Smaller road chatter is handled by the carbon layup, bigger hits by the design and shape of the fork and stays, and the really big stuff by the seatpost and seat tube. The critical aspect from a design point of view is that there isn't just one, but three, features of deflection that combine together to give the new bike the desired compliance. It also means the vibration absorbing features of the frame are working whether you're seated or stood up out of the saddle. 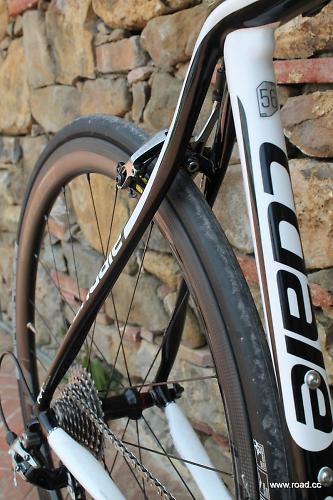 For the first time, the Synapse gets proprietary BallsiTec from the Evo. It's a military specification carbon, used to withstand mortar rounds, so tough stuff then, which forms the basis of the frame. Like the CounterVail technology used on the Bianchi Infinito CV, the carbon fibres on the Synapse are laid in a way to maximise inter-laminar shear to dissipate high frequency vibrations - that should filter out road buzz. They then tune the stiffness and comfort characteristics of the frame by placing strips of ultra- and high-modulus carbon fibres throughout the frame. “The resin has to tie them together, so they don’t actually move. Because that’s when you get delamination and your composite falls apart. With all these small movements going on, stress causing movement when you have things moving back and forwards, that energy between the fibre transfers into the resin, because that’s what’s connecting them.

“If the angles of the fibres is small, the stretch is very little. There’s not much energy transfer because they’re moving together. Where if you increase that angle between the laminates, then the two layers are stretching, or trying to move in different directions, is much more extreme. Therefore there’s more interlaminar shear stress, more movement, and therefore more energy dissipation.

At key areas where they wanted to concentrate stiffness in a targeted area, Cannondale have a staggered layup with overlapping layers, to give a smooth transition from the stiffness at a junction to flex further along the tubes. It has been used at the head tube, seat tube and bottom bracket areas. 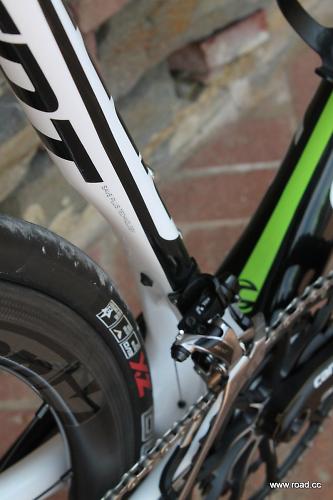 Next is the shape of the seat stays and chainstays, which have been carefully designed to absorb vibrations. The twisted helix seat stays increase the effective length of the fibres – the fibres are actually longer than the actual seat stays – so this means vibrations take longer to travel up the stays. This damps out more of the high frequency vibrations. You can think of the seat stays as like a section of a spring pulled from end to end, and they also twist and compress.

The fork is also, in a similar fashion to the seat tube, to allow a degree of deflection. It features a 1 1/4in to 1 1/8in tapered steerer tube with. The dropout is offset to produce more rake to add compliance while still retaining the ride quality. 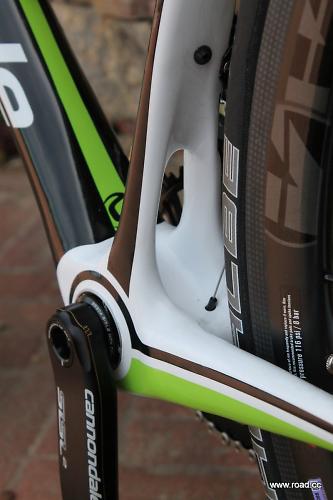 The seat tube has an unmistakable scalloped shape on the trailing edge, to allow it to bow under fore/aft under. At the bottom of the seat tube is the unique Power Pyramid: a split tube. Cannondale designers have increased the bottom bracket shell from 68mm to 73mm (they released there was 10mm of heel clearance on the driveside, but 15mm on the non-driveside, so they decided to utilise this spare 5mm in the frame) with a reduced crank offset, increased spindle length and moved the bearings out by 5mm. The Q-Factor remains the same. This allows them to maximise stiffness in the BB with no reduction in ergonomics. 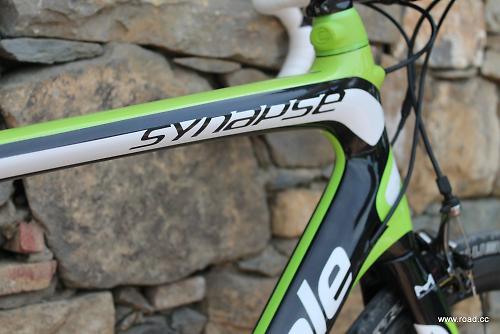 In widening the seat tube for the wider BB shell, they then hit upon the idea that by essentially moving the material from the centre of the wide seat tube to the outer edge with two smaller tubes, they could increase the stiffness, reduce weight and marginally improve aero, though it's specifically not an aero feature per se. At the top of the seat tube you get a super-slim 25.4mm seatpost made for Cannondale by FSA. They've integrated the clamp into the frame. Again, that's not for aero reasons but to increase the amount of seatpost above the tube in order to maximise the deflection that is possible. Cannondale's thinking is that a traditional seat collar would reduce the amount of post that can deflect under impact. If you want it in percentage terms, it's an 113% increased deflection on a 56cm frame with a 100kg rider (we'll ask for deflection figures for non-Clydesdale riders). 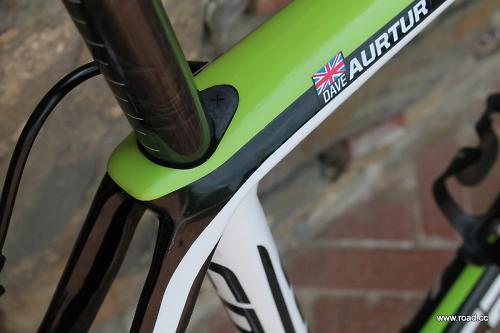 The clamp is a three-piece wedge system housed inside the frame, with a small bulge in front of the seat tube. A 4mm Allen bolt in the top tube is covered with a rubber bung and does the business when it comes to adjusting the post up and down. They didn't give any figures on the amount of vertical deflection this provides. They're trying to get away from the concept of a bike just designed to offer seated comfort. The Synapse isn't really just about comfort, as such. 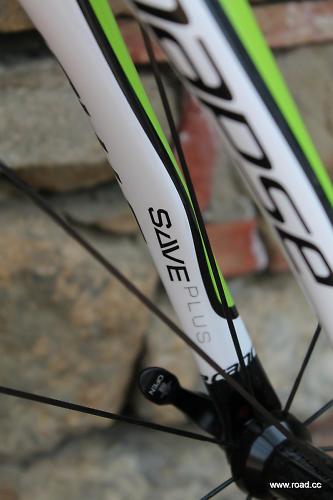 Weight wasn't a number one priority with the new Synapse; that's the Evo's arena. Evenso, a 56cm frame weighs a claimed 950g, which compares to 720g for an Evo in its lighter configuration. Cannondale say they could have made the frame lighter, but instead actually used extra carbon to concentrate on the comfort and handling characteristics of the bike. And as we've seen, it certainly hasn't been slowing Peter Sagan and the Cannondale Pro Cycling guys down much. 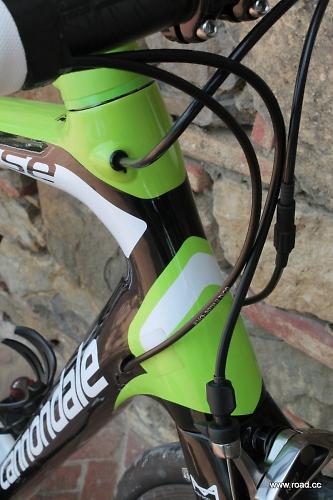 The Synapse will be available in 11 sizes and they've optimised the stack, reach and rake for each size. This is to allow a better fit for riders of all heights. So there's a specific fork rake on the frames up to 54cm, and it's different on 56cm frame and above. There's also a specific women's geometry, with a 56cm size for taller women. This is a huge investment in multiple moulds and tooling. So this is more than just a revamp of the Synapse. It's a clear rethinking of the bike and what it is for, the type of riding it's capable of and who the customer is. It's clear from what I've seen so far that the frame isn't simply designed to smother bumpy roads. The frame handles vibrations both when you're sitting in the saddle and when you're out of the saddle, whether you're climbing, sprinting, descending or coasting. The stiffness has been tuned to give a smooth transition from cornering to sprinting. And lest we forget, it's already got a race proven pedigree. This means there's the potential for far greater traction, as the wheels are better able to track the surface of rough roads, which should lead to improved handling traits. 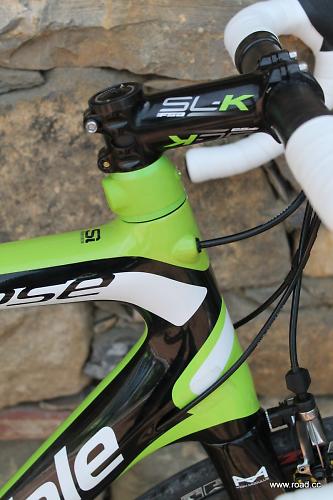 And what better way to test the bike out than on the roads used in the Strade Bianche, which start right outside our hotel. So with that, I'm signing off to go clip in and ride the new bike. We've got two days of riding pencilled in with the new Synapse and Ted King for company, so I'll let you know how I get on with it. But first, lunch. The food here is stunning, but you don't want to hear any more about that do you...

More tech details, interviews, prices and a look at the build options soon. Oh, and more pics once the internet connection is sorted.