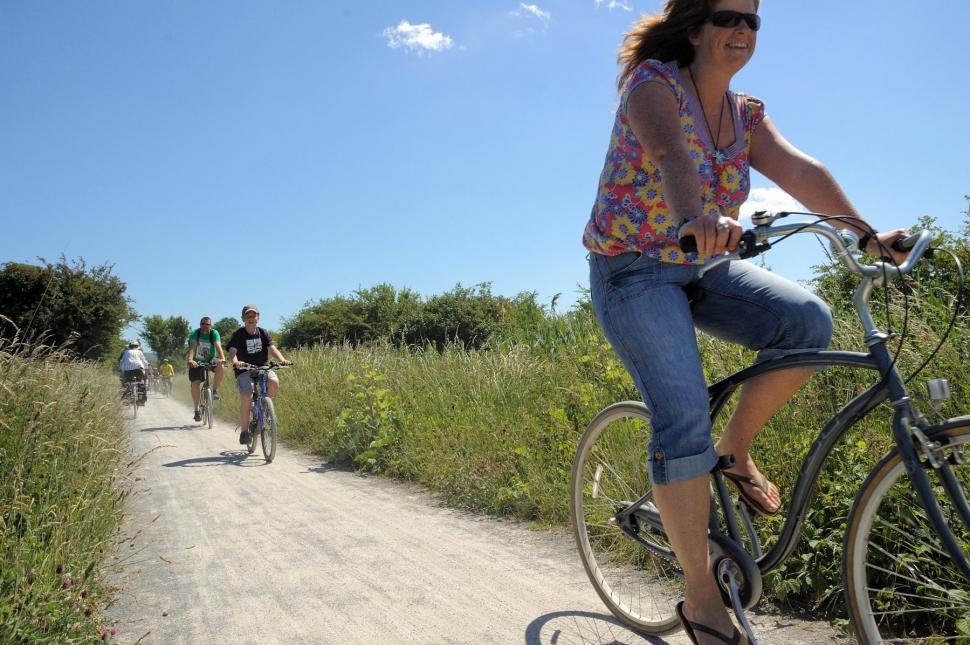 Shared use path's route now under reconsideration and cyclists urged to slow down...
by Sarah Barth

A six year old pedestrian has been knocked over on a newly opened cycle path leading to concerns over its shared use status and appeals to cyclists to slow down.

Festival Way cycle path, a Lottery-funded £2.1m route, was opened in May, and runs along a six mile corridor stretching from the Cumberland Basin in Bristol through to Millennium Park in Nailsea.

The girl was on her way to Flax Bourton Primary School when the collision happened.

Roger Higgins, chairman of Flax Bourton Parish Council told the Weston Mercury: “Parents and children are always aware of the many cyclists that use the path and move as soon as they see or hear a cyclist.

“But it can be really hard to hear cyclists coming from behind and most don’t use a bell or say anything to warn of their presence.

“They heard some friends call out ‘bike’ but the cyclist was going so fast, and didn’t attempt to slowdown, and before the little girl had time to move he had ridden straight into her, knocking her flat and he himself fell off his bike.

“Apart from shock, the young girl sustained a nasty superficial graze to her elbow and leg, but luckily nothing worse.

“We welcome the facility of the Festival Way Cycle Path in our village – it is popular with cyclists, walkers, dog walkers, joggers and is used by a number of children attending the school, but we ask cyclists to use the facility responsibly and show respect to the many non-cycling users.”

Local residents are seeking funding to re-route part of the cycleway out of the housing estate on Rosemount Road.

District councillor Geoff Coombs said: “The cycleway was built through the estate in the 1980s when there was a moderate level of usage, but usage has greatly increased, which is fantastic.

“However, that section is no longer appropriate because there are no pavements to segregate and there have been a number of incidents.

“The residents’ proposal involves 500m of re-routing which would cost £50,000 which is not available from North Somerset Council so we would be looking to organisations like Sustrans.”

When Festival Way opened, we reported how George Ferguson, who last year became Bristol’s first elected mayor and who now leads the city’s transport strategy, commented: "I welcome every single initiative that encourages commuters out of their cars and makes us a greener, healthier and safer city.

“A high-quality cycling link from Nailsea to Bristol will make a big difference to quality of life for all those who access it.

“All involved with this project have done a great job, choosing a clever route that forges strong links between the city and North Somerset."

Councillor Elfan Ap Rees from North Somerset Council added: "I am delighted that we can mark the official opening of this important route which at times has been a challenging project.

“We want to develop similar off-road routes in other parts of the district, for example a cycle and pedestrian link between Weston-super-Mare and Clevedon via the old railway line that used to connect the two towns many years ago."

Shared use paths in some areas provide ongoing concern for both cyclists and walkers.

Last month we reported that in an opinion piece for bristol247.com, Jon Usher of Sustrans called for some cyclists to slow down, lest we all be “perceived by pedestrians in the same way we perceive cars. We are becoming the menace that needs taming,” he wrote.

Usher, the Sustrans area manager for Bristol, Bath and South Glos, writes that he thinks the recent increase in popularity of fast road bikes is damaging the perception of bike riders.

He provoked controversy by appearing to target one set of riders in particular.

“Bikes with skinny tyres and drop handlebars are regularly ridden at excessive and frankly anti-social speeds on my daily commute. They are a cause for real concern,” he wrote.

“The sale of racing bikes [is] up across the board.

“However, this surge in sporting goods for leisure is percolating rapidly through to the urban cycling for transport realms.

“This transition has meant a shift from a relatively slow, cumbersome machine in urban environments to something much faster.