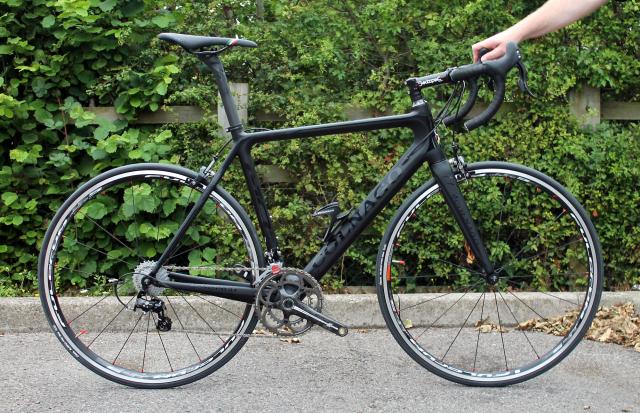 This is one of the new 2014 colour options for Colnago’s M10, which follows the current craze for stealth black-on-black finishes that seem to divide opinion greatly. Underneath the paint, the frame goes unchanged from last year, with the same monocoque carbon-fibre construction that makes it the lightest frame the Italian company produces. The frame is fully compatible with mechanical and electronic groupsets. A C-HS 1 tapered head tube uses a 1 1/4in lower bearing and 1 1/8in upper bearing. 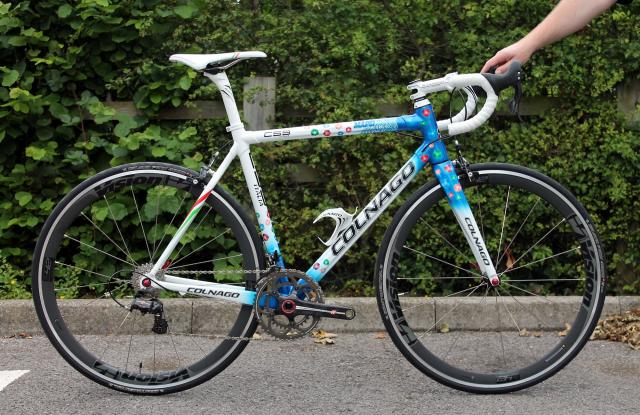 While the M10 is the lightest frame in Colnago’s range, the C59 Italia is undoubtedly the flagship model. Two years ago they produced a one-off Mapei painted bike (with a new font for the logo) for the owner of the company. At the time they said they wouldn’t make the paint scheme an option, but they’ve gone back on that decision and it is now available, and at no extra cost. 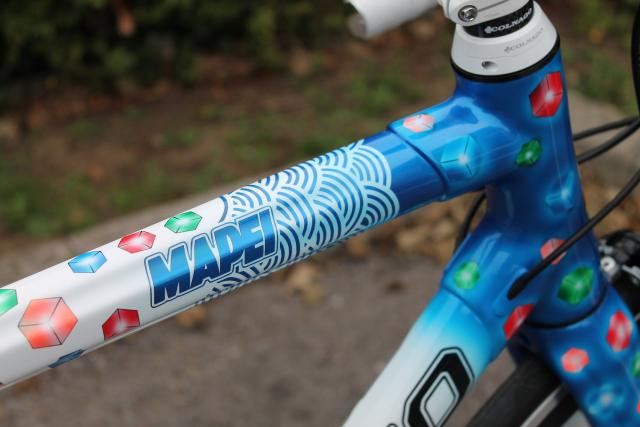 There’s a lot of history in the Colnago/Mapei partnership, arguably one of the most iconic in cycle racing. During the 1990s Colnago supplied bikes for the Mapei team – one of their greatest ever – with their colourful cubed jerseys. 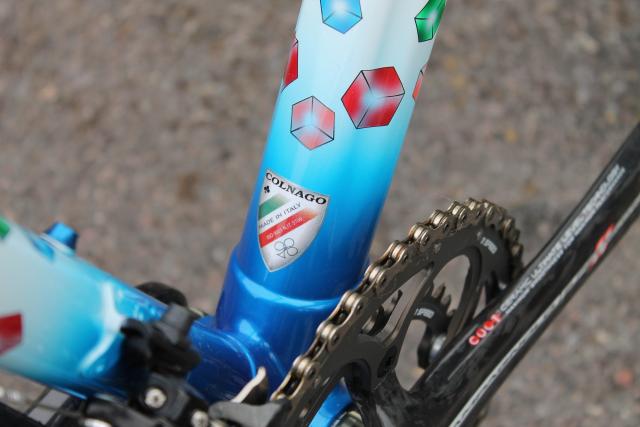 Colnago enjoyed much success during this partnership, which ended in 2002. There was Franco Ballerini’s victory in the 1996 edition of Paris-Roubaix, aboard a C40. Then in 1996, in the same race, Belgian Johan Museeuw headed a clean sweep of the podium. Many of the top racers of the past couple of decades pulled on a Mapei jersey at some point, including Cadel Evans and Mario Cipollini. 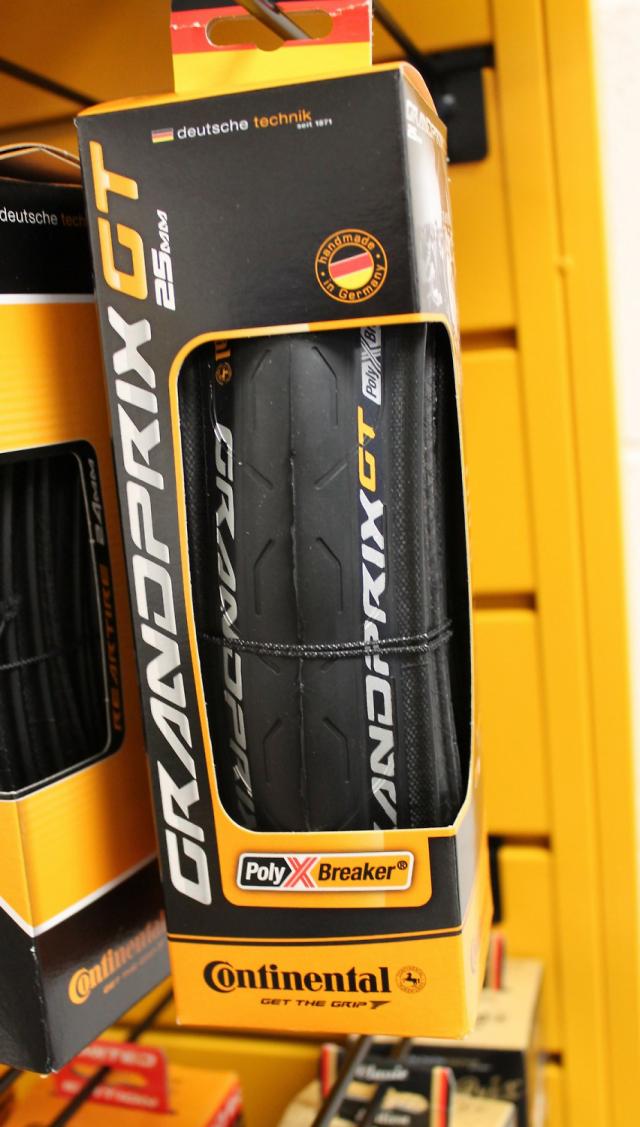 While visiting distributor iride.co.uk last week, we had a close look at what has to be the perfect sportive/training/touring tyre, Continental’s new Grand Prix GT. It’s 25mm wide, a width becoming increasingly popular with both general riders and racers. It’s made with their BlackChili tread compound and underneath that there’s a PolyX Breaker to stop thorns and glass penetrating the tyre. The sidewalls are thicker than the regular Grand Prix tyre, with a 3-ply casing increasing the sidewall thickness. The weight is a claimed 250g and the cost is £39.95. 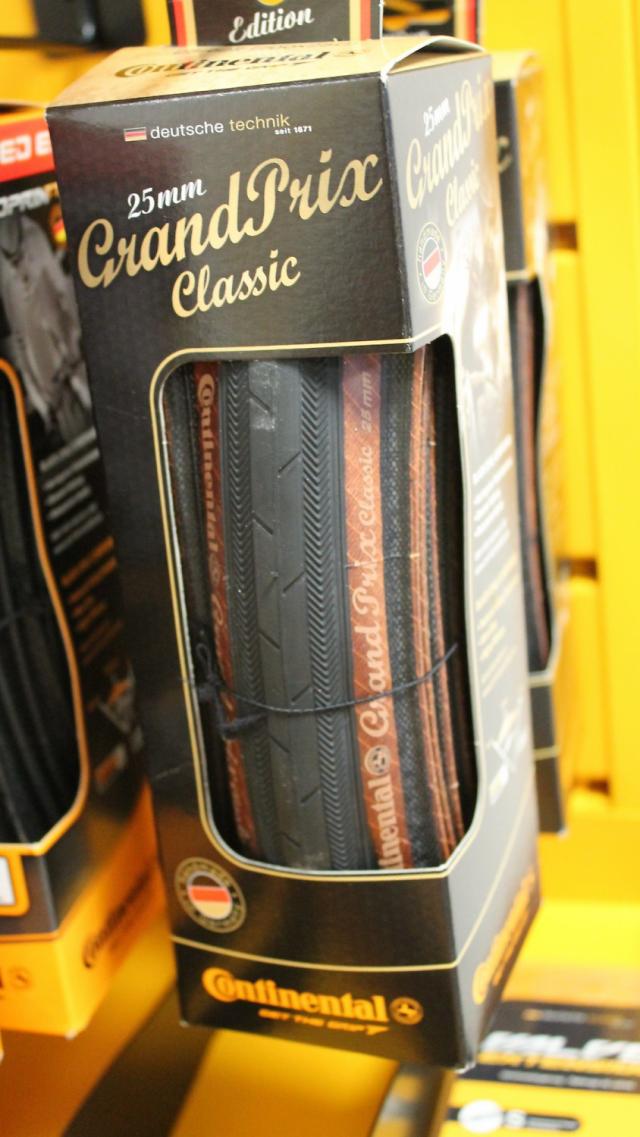 Continental’s new Grand Prix Classic 25mm tyre will appeal to anyone searching for a retro looking tyre. We can imagine it looking smart on any steel-framed touring bike such as the Genesis Equilibrium Disc, for example. Despite the fact it’s styled to emulate the original Grand Prix tyre with its brown sidewalls, it’s packed with Continental’s latest tyre technology, including their Black Chili tread compound and PolyX Breaker for puncture protection. Weight is a claimed 230g and it costs £39.95.

Bike accessory company Spurcycle has reinvented the bicycle bell and is looking for support on Kickstarter for their new product.

Spurcycle make The Ringer in the US from brass and stainless steel and it’s available in two versions—raw finish and stealth black—for pledges starting at $35. It will be delivered to supporters within 60 days of the project’s completion. 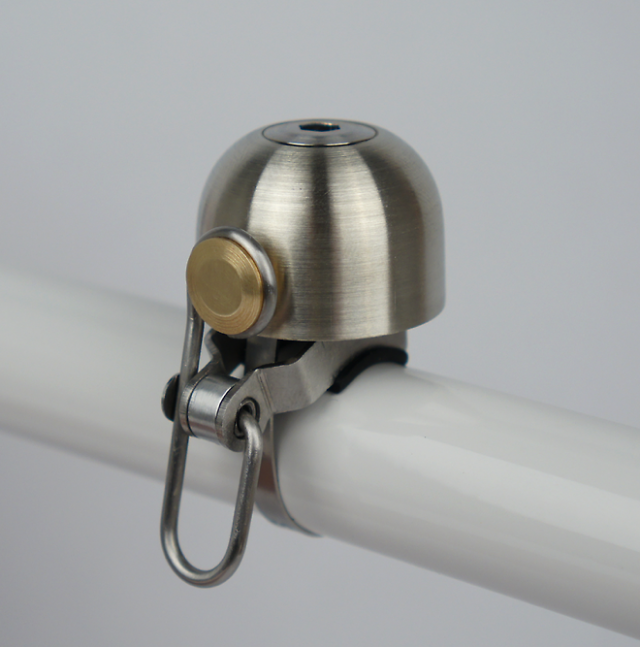 “All sorts of riders with high-end bikes have been reluctant to mount a bell on their bars, simply because no bell exists that matches the elegance and quality of a performance bike,” said Spurcycle co-founder Clint Slone. “With the Ringer, we’ve made that bell and believe our Kickstarter project will quickly reach its goal.”

Spurcycle’s first product was GripRings, a modular bicycle grip that can be customised into millions of colour combinations. Go to their Kickstarter page to find out more about The Ringer.

We’ve never featured Teko socks on road.cc before… so here they are.

The Evapor8 socks are made from 100% recycled materials like drinks bottles, and they’re designed to keep your feet dry, comfortable and odour-free. They’re also said to be durable. 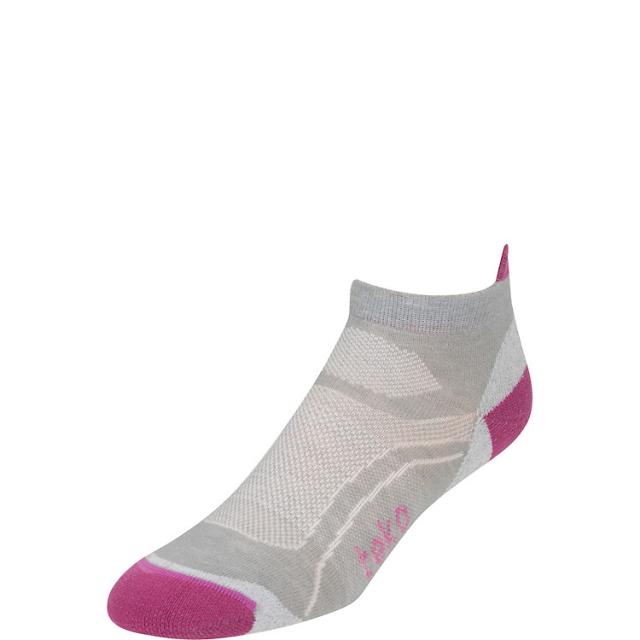 The men’s version is available in white and black while the women get to choose from white, della/ice, and moonmist/foxglove.

For stockists go to www.tekosocks.co.uk.

Map My Tracks has launched the official Tour of Britain Tracker app which will provide live online and mobile coverage of this year’s race. The app will give live tracking of each of the eight stages, latest news from the race, results of the day’s action and social comment from around the web. The race starts in Peebles on 15 September. 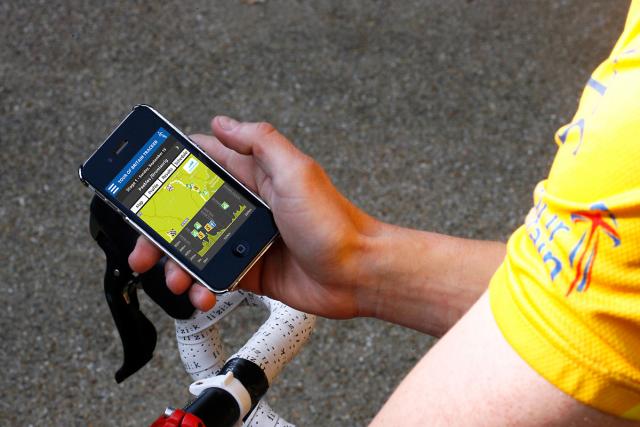 The iOS/Android and web app will offer riders’ real-time progress on any connected device. It features interactive route maps, details of all the climbs and sprints, and will allow you to scope out the best roadside vantage points. 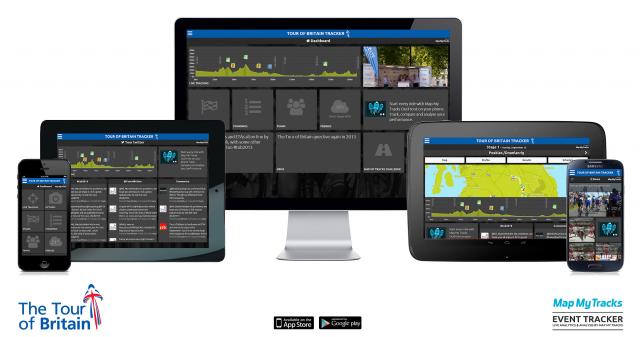 Urban cycling specialists BioLogic have lanched a super-thin new multitool called the FixKit. It comes with 20 tools including a 15mm spanner for axle nuts and pedals. 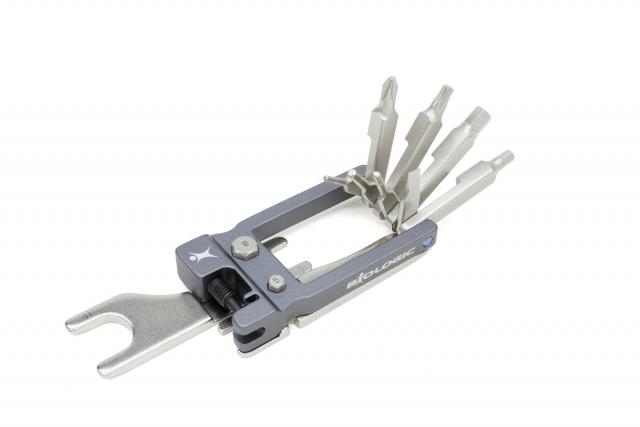 Other tools include seven hex keys from 2mm to 8mm, three spoke keys, screwdrivers, a chain tool and a bottle opener.

The tool’s patented design securely locks wrenches to the tool body, that body becoming an extended handle. The included neoprene pouch can be slipped onto the body handle for a more comfortable grip. The tool measures14 X 40 × 77mm and weighs just 158g. 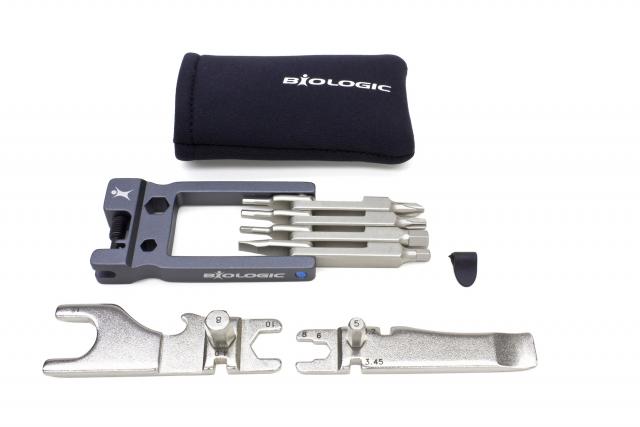 The FixKit is priced £30 and will be distributed by www.paligap.cc.

For more info on BioLogic products, go to www.thinkbiologic.com 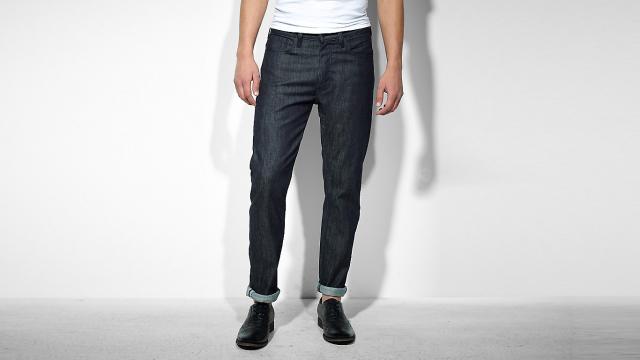 Levi’s are offering free delivery and free returns on all orders, including their Commuter range, on levi.com from now until 4 September. 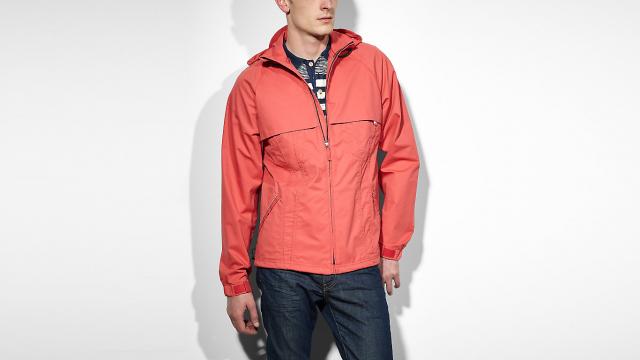 You can get an additional 25% off discounted products if you place an order of over £100.

There are no bike-related T-shirts in Tech Round-up this week. Sorry about that. We’re as distraught as you are. We’re sure that normal service will be resumed shortly.

1
Near Miss of the Day 789: Sensible discussion and apology follows learner close passing cyclist during driving lesson
2
Cyclist punched repeatedly by motorist in road rage incident
3
How many miles do you get from your tyres? Plus new stuff from Hutchinson, Santini, Le Col, HUUB, and loads more
4
UCI downgrades RideLondon Classique due to “unacceptable lack of respect” for teams and riders
5
“This could be his GC over”: Joe Biden falls off bike after getting foot caught in toe straps
6
Near Miss of the Day 786: “They have been behind you for some time” – Police say close pass isn’t careless as cyclist didn’t change direction
7
“Sparks flying in broad daylight”: Thief attempts to steal Labour MP’s bike using angle grinder
8
Near Miss of the Day 787: “It’s a cycle lane, innit?” Driver punishment passes cyclist for not riding on notorious Priory Road bike lane