Italy-based rider Juliana Buhring, the current women’s round-the-world record holder, looks set to beat most of the men who started the Quick Energy TransContinental Race as she closes on Istanbul 11 days after setting out from London.

Five riders have now finished the TransContinental, and only three - Rimas Grigenas from Lithuania, Australian Edward Jones and New Zealander Nicholas Pusinelli - are currently ahead of Ms Buhring. Mikko Makipaa is taking a dramatically different route from the others and may just edge them out. Belgian Kristof Allegaert was the first rider to reach Istanbul from of the 31 riders who set out from Westminster Bridge in London at 8am on August 3. His time of 7 days 13 hours and 45 minutes was substantially faster than pre-race expectations and set a benchmark thats sure to be a target in future editions of the event.

Riders had to pass through just two checkpoints on their journey between London and Istanbul. As long as they reached the top of the Kappelmuur in Geraardsbergen, Belgium, and the top of Italy’s Stelvio pass, riders were free to choose any route across Europe that they liked. Richard Dunnett on the Stelvio

Second-placed rider Richard Dunnett from the United Kingdom kept pace with Allegaert over many stretches and followed a similar route but lost time due to navigational errors that was not recoverable.  He reached the finish line at the Ottoman Fortress 26 hours later and was met by Allegaert.  The pair are enjoying the hospitality of the Turkish Tourism and Culture Office, while they await the rest of the riders. At the time of writing, Rimas Grigenas about 40km from Istanbul, and expected to be the sixth rider across the line.

For many of the 19 riders still out on the road, the event has now become a matter of grit and determination to finish. A couple of hours ago, Ms Buhring tweeted: “40 degrees, knee pain, backache, sore arse, but by all the hells, I'll finish this thing if only to earn cold beer at the end.” One of the TransContinental riders climbs the Stelvio

Australian Anthony Hawke seems to feel the same. “Starting to feel the need to finish this @transconrace  thing,” he tweeted earlier today.

Like all the TransContinental riders, they are out there completely without support, relying on what they can buy along the way or carry themselves. 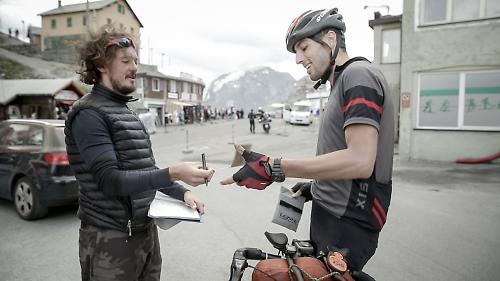 The sheer difficulty of the task has meant some of the 30 riders who started from London have dropped out but are still riding, having decided to switch from race mode to very lightweight touring. Rimas Grigenas and Mike Hall at the Stelvio checkpoint

“We wanted the front end of the race to be an exciting battle and a demonstration of endurance and thanks to some very talented riders starting, we have seen truly remarkable finish times so far that have exceeded our expectations,” said Mr Hall.

“There can only be one winner however, so everyone else needs a reason to be here and carry on if it’s not their day.  That riders who have had less than ideal fortune choose to relegate themselves and continue anyway heartens me greatly because I want to see them all in Istanbul, however they get there.  I don’t want to see anyone have an unfortunate race spoil a beautiful bike ride.” A welcome sight, not far from Istanbul.