Tomorrow morning Mike Cotty will embark on a 666km trans-Alpine epic challenge, pitching him against 17 cols and 16,000m of climbing. We revealed the details of the route and a video teaser last week, and now we can take a look at the bike he'll be riding, plus some of the other tech challenges he faces in the 36-hour non-stop ride.

At this point we’ll pass over to Mike to talk us through the details of his bike, his lighting solution, Mavic backup and a glimpse of the food he’ll be working through on the ride.

At the heart lies a Cannondale Evo Hi-Mod frameset equipped with Mavic Cosmic Carbone Ultimate wheels and Shimano Dura-Ace Di2 9070 11 speed groupset. The conclusion I quickly came to is if the Evo is good enough to take everything Peter Sagan can throw at it then, even in anger, my legs aren't going to worry it too much.

With the distance and amount of climbing that I hope to achieve, weight is a major consideration, but not to the detriment of durability or performance. I'm not into crazy light (and sometimes dangerous) components just to shave off the equivalent of two gulps of water in weight as I'd much prefer to have full confidence in my equipment, especially when hurtling down the Galibier in the dark. 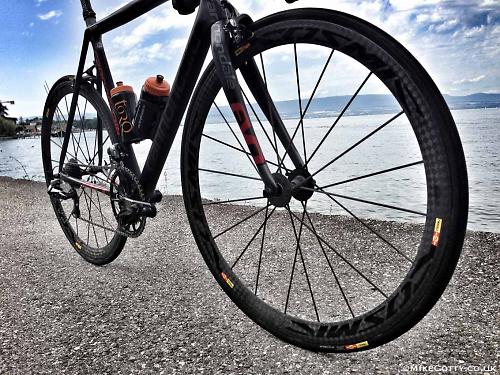 I normally reserve my Mavic Cosmic Carbone Ultimate wheels for "special occasions", but they've be summoned back to the front line for this ride. Their ridiculous light weight and stiffness give an immediate "feel good factor". The only thing is they're so responsive that they seem to continually be begging to be ridden faster so I'll have to do what I can to hold my composure. 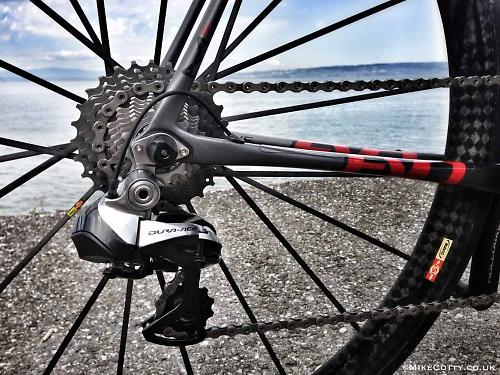 For me, Shimano Di2 is something of a revelation for endurance riding. Fatigued hands may not be the first thing you think about when on your bike but I've found that literally just having to make the slightest finger movement to shift (especially on the left side) all adds up to feeling fresher over the course of my longest rides. I'm going to coin that as an MC marginal gain... 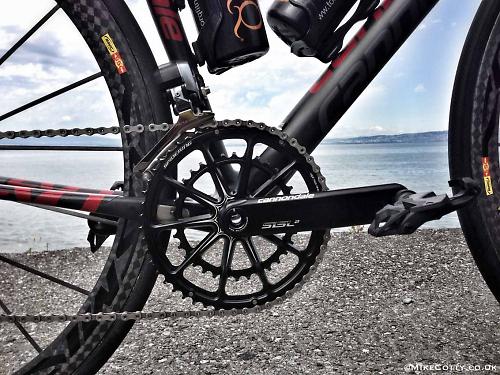 I prefer to try and maintain a higher cadence, especially when in the mountains, so am running a 34x28 as my lowest gear. My main goal is to try and make it to Nice. The distance alone is one thing: chuck in 17 mountains like some bright spark did (oh that was me) and I need to give my legs all the help they can get. 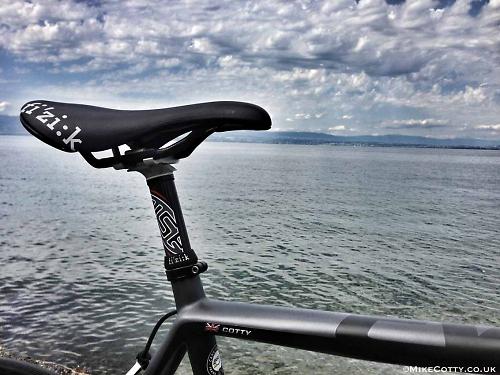 The prospect of sitting on the bike for the best part of 36 hours is daunting to say the least so it's essential to be very intimate with your touch points. I've used the Fi'zi:k Aliante saddle since it was launched and despite not being able to gloat having a stature like a "Bull" (more like a Sparrow) as the Italian brand's marketing would suggest I've found that the curvature and padding suit me well.

USE Summit carbon handlebars help to soak up some of the road vibration and with integrated cable guides it also makes neat work when routing Di2 wires as I found out when building the bike. As they have an oversized diameter I keep bar tape to a single wrap as I don't like it feeling too chunky. 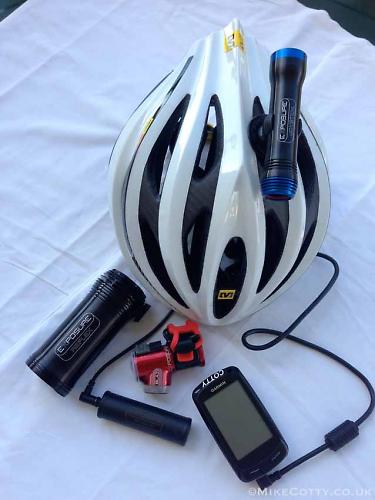 To light the way during the darkest depths of the night I'll be using an Exposure Reflex on the bike and Joystick on the helmet. Dishing out a combined 2600 lumens I've given up being surprised when oncoming vehicles flash me to turn them down. Out back Exposure's Blaze will have the job of keeping me seen, even if I'm not heard. At this time of year I expect to be in the dark for around 7.5 hours which shouldn't be a problem in terms of battery life and burn times. 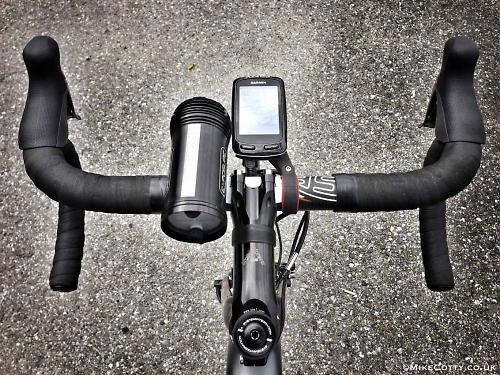 Talking of battery life, one area that I've paid particular attention to is powering the Garmin for the duration (estimated 36 hours). Using an Exposure Piggyback battery, and boost cable, will fully charge the unit three times whilst on the go. My biggest problem was actually having enough clearance to plug the USB connector into the unit without it fouling on the faceplate of the stem. I got around this having a custom clamp 3D printed by Raceware Direct that is 15mm longer than standard. Don't you just love technology? 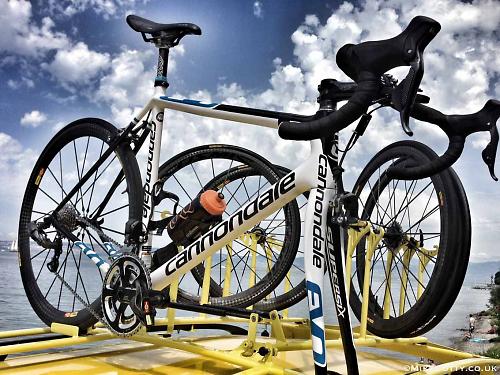 Having dedicated an extortionate amount of time training for this, sometimes to the detriment of my personal life, and not wanting things to be scuppered by a mechanical I'll have a spare bike ready in the form of an EVO with Ultegra Di2, setup exactly the same in terms of position and touch points as my main bike should the unthinkable happen."

Here’s the full details of his bike build:

Will you have any support on the road?

For years I've watched in awe as the yellow Mavic service vehicles patrol the peloton like a guardian angel to the professionals. For this ride I'm in a very fortunate position to have to have a Mavic support car (equipped with all my spares, kit and food) and team watching out for me. 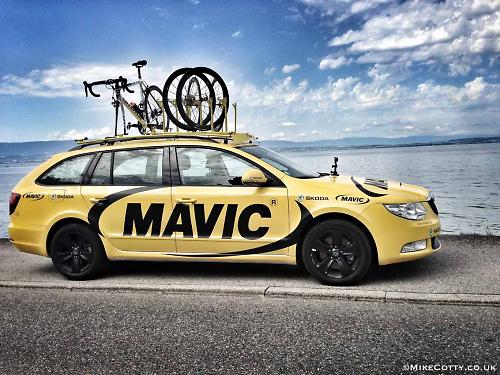 Whilst the purists may see this as 'the easy way out' compared to an unsupported ride, for me this is a personal challenge that I wish to share with some of the closest people in my life. Have you ever tried explaining the moment to someone after it's happened? No matter how hard you try you just can't paint the same picture in words and photographs.

I know that experiences like this really are once in a lifetime. Whilst I may be the guy sat on the bike a lot of people have put in countless hours to help me get to this point which I am truly grateful for, so I hope being able to share this experience is a little payback for all their help. And, let's face it, having a Mavic support car is the stuff kids dreams are made of......well, mine anyway. 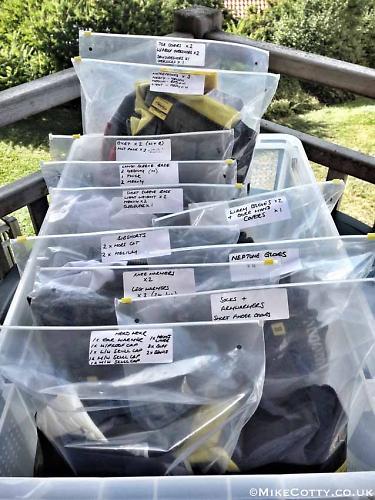 As is the volatile and ever changing nature of the mountains, it's impossible to predict exactly what conditions may be faced. Preparing for every eventuality has been a mission in itself. I've sectioned all of my kit, packed in bags and labelled accordingly so it's very easy to locate whilst on the move. Scrabbling about in a kit bag trying to find what you need, especially when sleep deprived, is not something I relish the thought of and from past experience I've found this to be the most efficient system - both for my own head and for that of my support team. Keeping the calories coming in throughout the ride is crucial. Again, everything is boxed and prepared in advance to keep things as simple as possible. I'll mainly be using traditional energy bars, gels and drinks along with some savoury snacks for later in the ride to give my stomach a breather from all the sweet stuff.

We asked Mike about his training, the most crucial aspect of preparing for a ride like this. He told us the hardest training period was the final weekend a fortnight before the challenge, which consisted of  20.5 hours of riding in a 27 hour period.

I went through some pretty low moments that weekend, especially during the night on my own, but it was a very important part of my mental preparation - knowing how my body and mind reacts to certain situations and how to overcome the feeling that when you're completely broken there's still a way forward and the will to keep going. We live in hope.

I'd like to take this opportunity to thank everyone who has played a part in bringing this dream to life. Hopefully I've got just about everything covered which means the only thing left to do now is go ride. Au revoir!