Merida launched their first aero road bike, the Reacto Evo, earlier this year and we spotted it in Lampre-Merida team livery last week in Corsica, as the team prepared it for the Tour de France.

We've told you before about the Merida Scultura SL bike that Lampre are also racing on, and the new Ride SL that they used for the cobbled Classics.

Merida have also launched a new version of their slippery Warp TT bike. It's the latter that has clearly influenced the new Reacto Evo, with very similarly fashioned aero shaped tube profiles. In fact, the back end of the frame, with the seatstays meeting halfway down the seat tube, looks like it’s straight from the Warp. The tubes that slice through the wind have been shaped according to NACA airfoil principles, and using the popular Kamm tail approach of chopping off the trailing edge, tricking the air into acting as if the trailing edge was there. This not only helps Merida get around the UCI’s 3:1 rule (tube depth can't be more than three times the width), but also reduces weight. Merida claim the stiffness of the Reacto is only a little less than that of the Scultura. 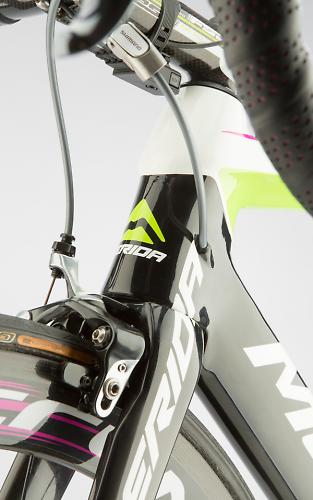 It’s a more conventional front end, with a very small and slender head tube. While the front brake is mounted in the regular location, the rear brake is hidden down under the chainstays. Cables, as you can see from the photo, have been internally routed.

Aero road bikes are a big buzz in cycling this year, with most manufacturers now boasting a wind tunnel designed (or, more accurately, a CDF-designed and wind tunnel tested) frame. We profiled 12 of the latest aero road bikes in this article here. Aero road bikes essentially draw the aerodynamic features from time trial bikes into a road frame.

When we spoke to Jurgen Falke, Merida's Head of Design, back in February he told us, "We launched [the first incarnation of] the Reacto at a time when it wasn't clear that aero bikes would become a trend. The new Reacto Evo carries many details of the TT bike. It’s the perfect bike for breakaways and for sprint trains.

"We have had very good feedback from [Team Lampre-Merida rider] Filippo Pozzato riding a Reacto prototype with a customised geometry. Filippo is known to be very straight with what he says. If he doesn’t like something, he will point it out. Without being asked, he said the Reacto is the fastest bike in descents he ever rode. He’s not a perfect descender but with the Reacto it’s the first time that he’s felt 100% confident on the descents. He feels faster with more control of the bike."