Here is the Merida Scultura SL that the Team Lampre Merida will be racing on this year. This is the first time that Merida have been represented in the pro peloton, having just taken over from Wilier as the bike supplier to the Italian team. The frame is essentially the same as the one used for the Merida Scultura SL Team that we reviewed here on road.cc earlier this month although the version the team rides is actually a little heavier – we’re talking about just 40-50g.

Why? Well, according to Jurgen Falke, Merida’s Head of Design, “The only minor modifications are to do with durability for a road racer’s life. They are intended to reduce cracks caused by transportation and things like that. 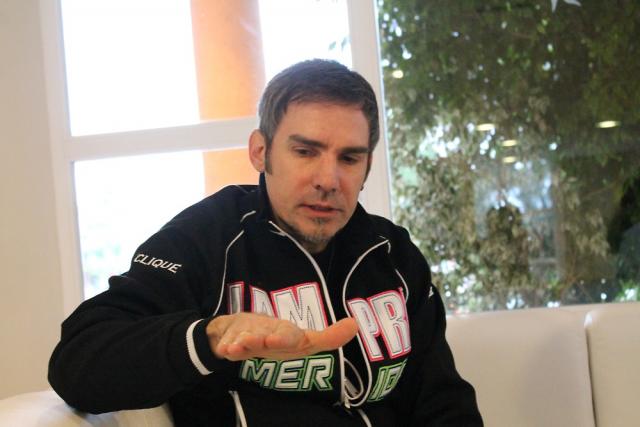 “The frames used by the team racers have reinforcement around the water bottle rivets because a racer has to use his water bottle 20 times a day. In racing conditions he doesn’t have the time to properly insert the bottle in the cage so there’s a lot of side force coming in there. The team bikes also have a stiffer front derailleur hanger that’s not just bonded but riveted to the frame.

“Mechanics have to take the spare bike from the roof of the car in seconds. No one has the time to do it carefully and damage can happen to bikes because of this kind of handling, so there are some small hidden reinforcements to the frame.”

So, there you go – the version you can buy in the shops is just a smidge lighter than the one that’ll be ridden in the Tour de France. Merida reckon that there is no difference in stiffness or handling characteristics. 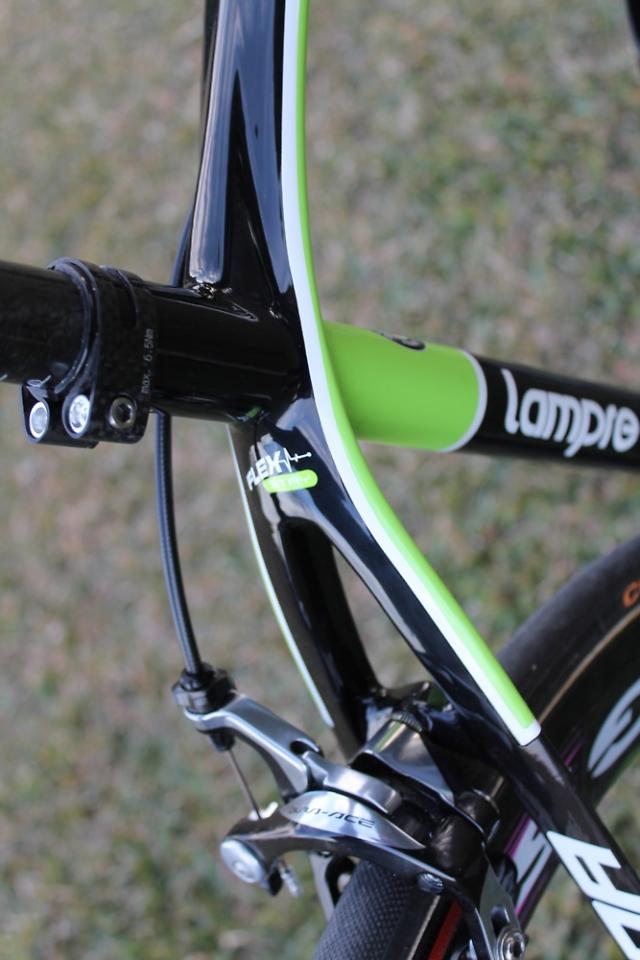 Naturally, the Scultura SL frame is lightweight, Merida claiming 830g for the 54cm version that’s in the shops, and 330g for the fork. But Merida are equally keen to emphasise the Scultura’s comfort. They use bio flax fibres sandwiched within the carbon-fibre for vibration damping – and, having ridden the bike a lot, I can tell you that it’s certainly a smooth-riding bike. The size of the stays and the fork also contribute to this overall feel, according to Jurgen. 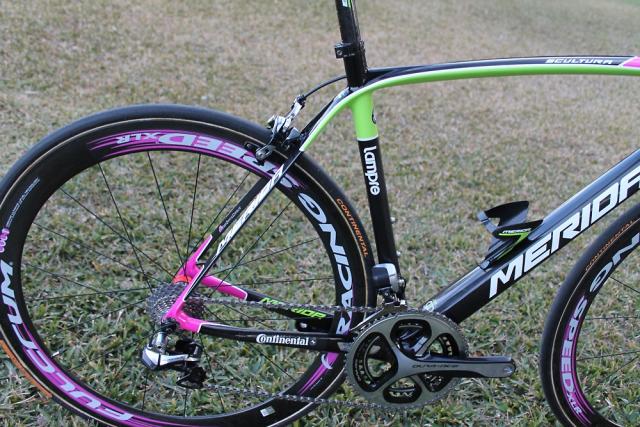 “If you want something to flex, you need to create a dimension that allows movement, no matter which type of fibres you use. If you want to get a comfortable frame, it’s the dimensioning of the fork and the stays. Form follows function. Stays need to be slight. Look at BMC, look at Canyon and Cervélo. All of them have stays that are 10mm – the minimum the UCI requires as the dimension for a stay.”

Look at the seatstays on the Scultura and you’ll see that they’re incredibly skinny, and very flattened: the width of the tube profile is much greater than the height to encourage vertical movement.  As well as adding to the comfort, that flex also allows the bike to stay in better contact with the ground rather than jumping on imperfect road surfaces.

“Lots of people can make bikes that are super stiff and super rigid but the frames simply jump around,” says Jurgen. “It’s about control of the wheels on the road. The flex means that when you are on a descent the bike is simply better to control because the wheels stay on the ground better.” 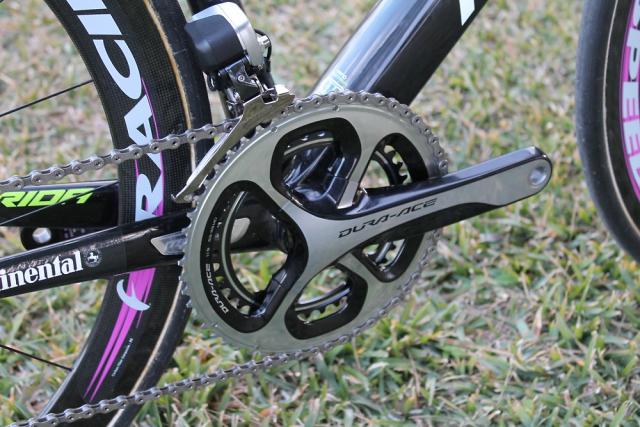 The Lampre Merida bikes are fitted with Shimano groupsets. This is 11-speed 9070 Dura-Ace Di2 which offers fast, slick shifting. 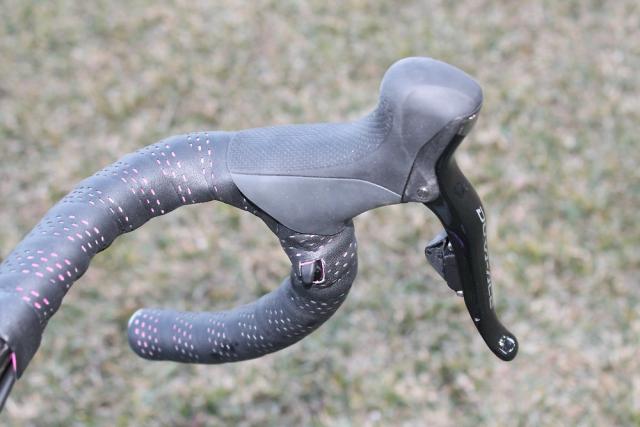 They’ve gone with satellite sprinters’ shifters here, the buttons poking through the bar tape for easier shifting from the drops. They’ve chosen to use satellite shifters for both mechs. 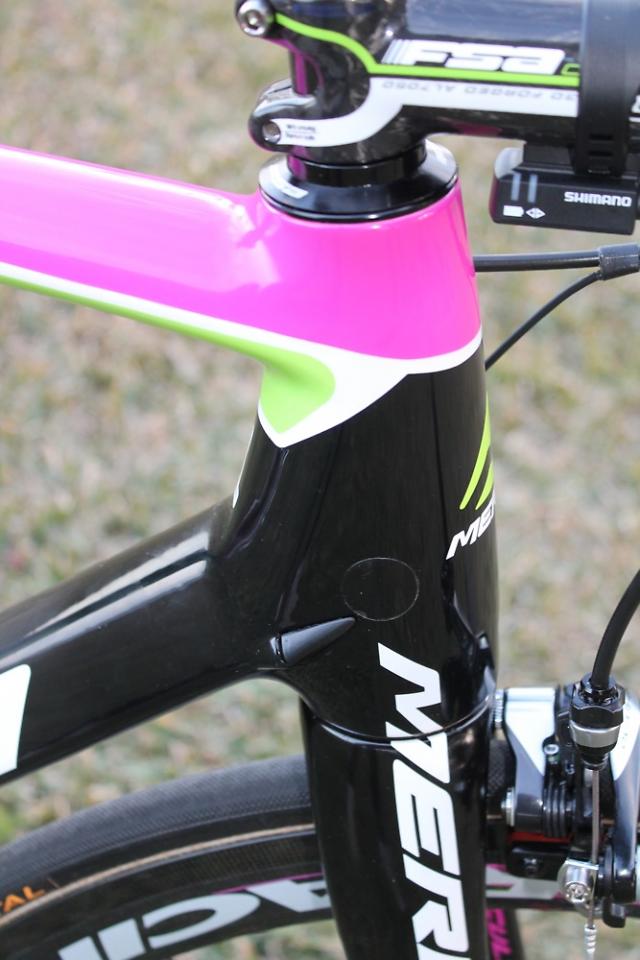 The frame can take either standard mechanical mechs or an electronic setup. If you run electronic, like Merida Lampre, a small bung covers the redundant hole at the head tube/down tube junction. 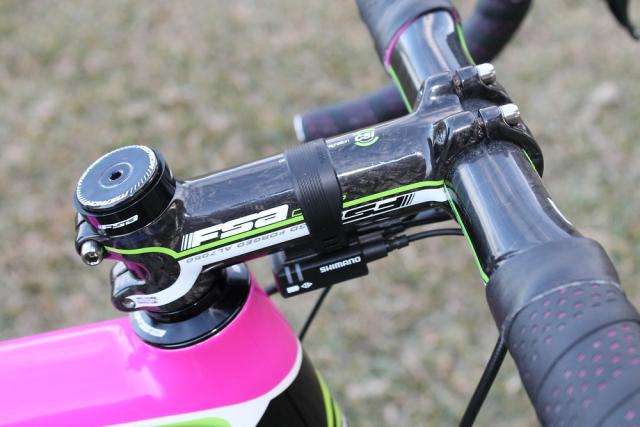 The Di2 junction box is neatly stowed under the stem with a rubber O-ring.

Speaking of the stem, this one from FSA is Al 7050 aluminium with a carbon skin applied. FSA use their Carbon Structural Integration (CSI) process to permanently bond it on there. 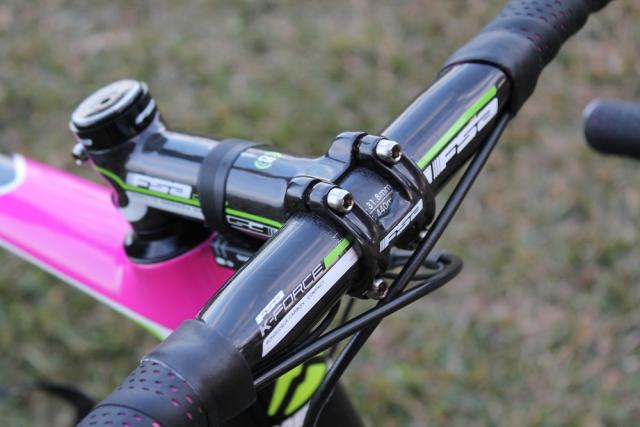 The handlebar is from FSA too. K-Force is FSAs top-of-the-range offering, using a carbon/Kevlar construction. This is the compact version that seems to be becoming ever more popular, with a 125mm and 80mm reach. The claimed weight is 210g. 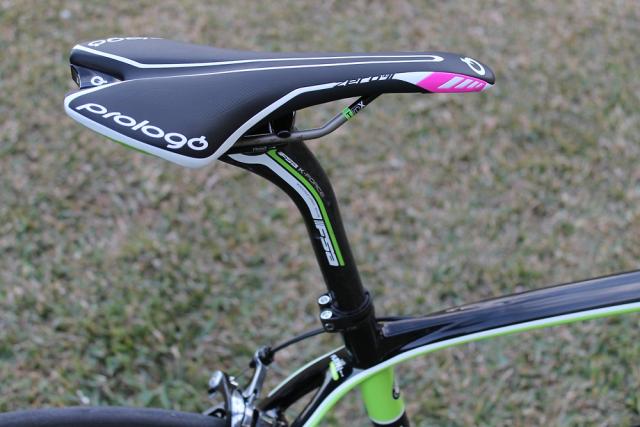 The final component from FSA, who have a massive presence in the pro peloton, is the seatpost. Again, it’s from the K-Force line, and it’s a one-piece carbon-fibre design with a forged alloy top clamp. Merida use a 27.2mm diameter post, the slim size helping to add some extra comfort. Loads of manufacturers are now moving back in this direction having shifted to chunkier, stiffer posts over the past few years.

That saddle is a Prologo Zero II with titanium rails. I rode a Merida Scultura Pro 907 – a bike that’s on the way in Lampre Merida colours – out in Mallorca and I really didn’t get on with it. Horses for courses and each to their own, but I just found it really harsh – and I’m not usually particularly fussy when it comes to saddle choice. 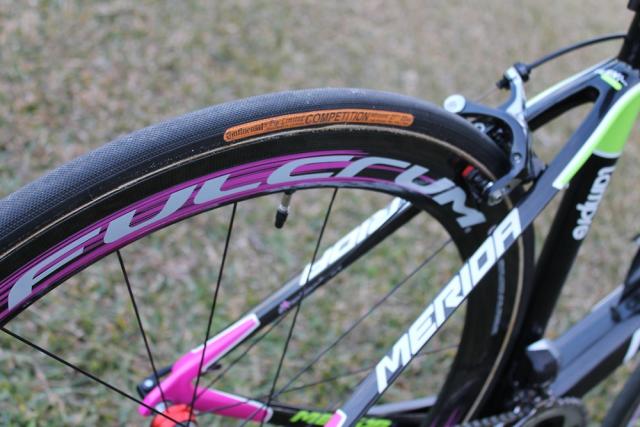 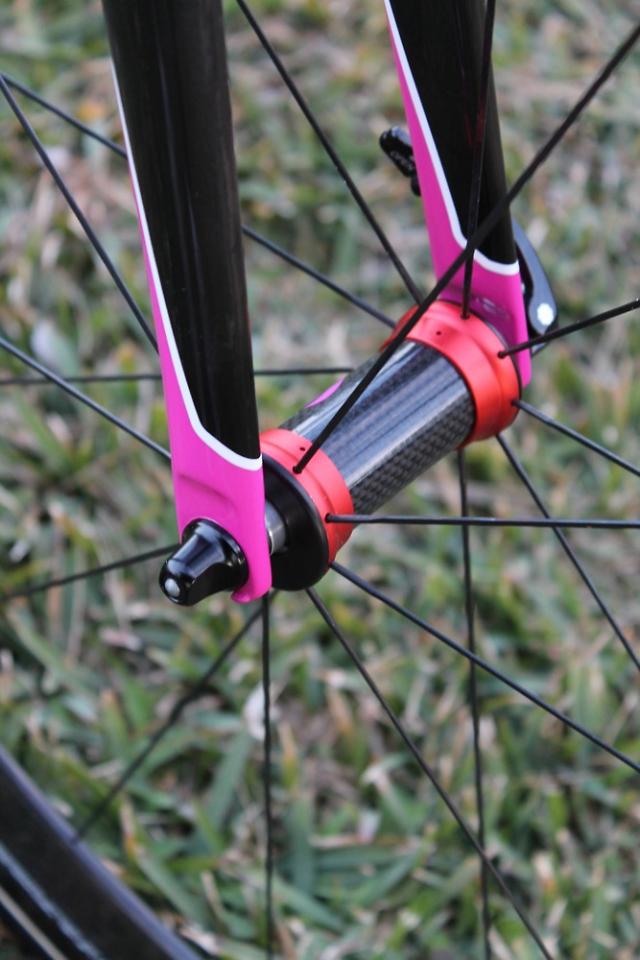 We don’t like to get too into the aesthetics in a tech piece but the red hub flanges next to the pink frame and fork details really don’t do it for us. They need to get that sorted out. The pink graphics on the wheels have been done especially for Lampre Merida, so we’re sure they could do something else with the hubs if they wanted to… but apparently that’s the way they’re going to stay. Lampre Merida go with Continental Competition tubular tyres.