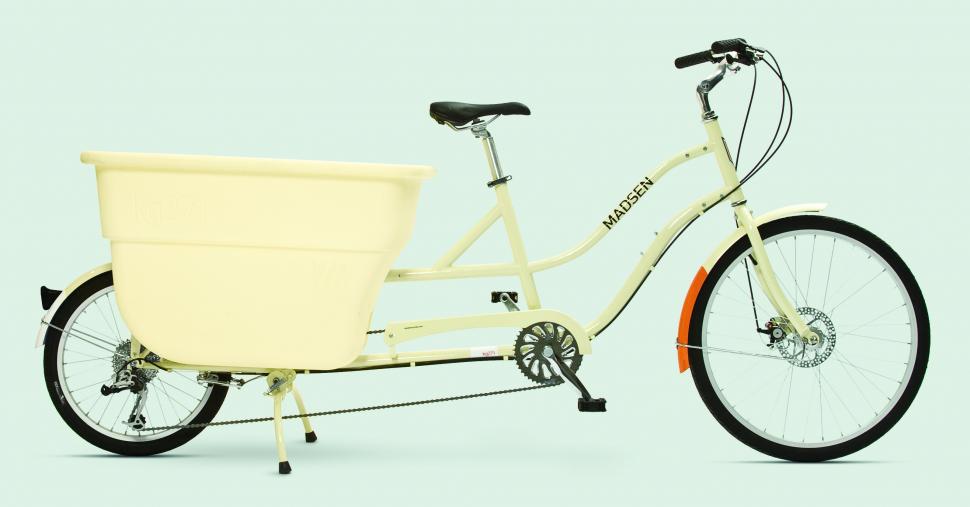 A cargo bike from the US now being sold in Britain promises to let school-run parents ditch the 4x4 in favour of a greener alternative, allowing up to four children to be carried in a bucket through the addition of benches and seatbelts.

Salt Lake City, Utah-based Madsen claims to bring “bomb-proof utility to the urban transportation pathways of bicycle owners”, and as well as the bucket model, which is also suitable for carrying the shopping, there is another version of the bike that comes equipped with a rack suitable for activities such as camping trips.

The company’s first prototype consisted of a wheelbarrow bucket bolted on to the front of the bike, which was used to transport six children belonging to some presumably trusting neighbours. Madsen subsequently decided to extend the chassis to allow the bucket to be repositioned over the rear axle to provide greater stability.

The bikes are imported into the UK by Lancashire-based cargo bike specialist Practical Cycles and cost £1,099 for the bucket version, which comes with one wooden bench and two seatbelts, and £999 for the rack-equipped model. Extra benches, seatbelts and a rain cover are available as separate accessories, as is a lockable lid.

Practical Cycles’ owner, Zaynan Lythgoe, says that the company has almost sold out of its first consignment, received in May this year, and that the bikes have had an enthusiastic reception from purchasers. “We’re a small company,” he explains, “and like to have contact with customers after the sale. One lady sent us photos of a touring holiday she took with her dog on her Madsen.”

Lythgoe believes that interest in the Madsen model stems from a growing trend in carrying more on bikes generally, saying that “compared to this time last year we’ve seen a lot more interest in cargo bikes and specifically carrying children on bikes, which accounts for about half of our enquiries.”

Stepping Stones nursery in the London Borough of Richmond upon Thames provides further evidence of this trend. In 2007, it secured £5,000 funding from Transport for London to buy four Dutch cargo bikes, which can be borrowed by parents to transport their children or to do the groceries, and says that the bikes have been in constant use since the scheme was launched.