You hang around for ages waiting for one new time trial bike from Pinarello and you get two, hot on the heels of the Bolide, Pinarello have now launched the brand new Sibilo time trial bike. It will debut between the legs of Alejandro Valverde at the Spanish Time Trial Championship, and then be used by Movistar at the Tour de France.

This isn't a replacement for the Bolide - launched with much hype and hooplah at the Giro, both appear on the UCI’s approved list of bicycle frames. Pinarello have confirmed to us today that Team Sky will ride the Bolide and Movistar the Sibilo. It appears that Pinarello have seemingly developed two time trial bikes for the different teams, the Bolide most likely with input from Team Sky.

The Sibilo was only given the seal of UCI approval on the 6th of June. The bike does look a substantial step forward from the Bolide and has more in common with the direction other manufacturers are taking with their time trial bikes. With the very straight lines there’s just a hint of Canyon’s Speedmax and Cannondale’s Slice about it. There’s a noticeable lack of Pinarello’s distinctive curves, the pursuit of aerodynamics trumping any aesthetics concerns. There's also a much different brake integratation design. 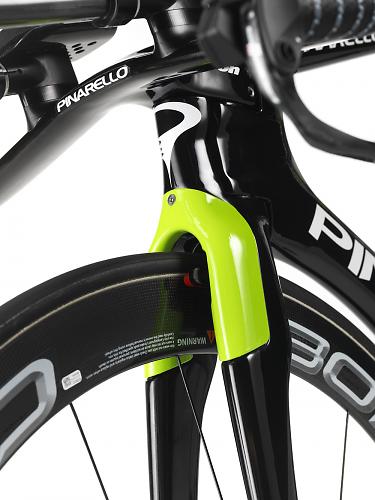 The Sibilo uses airfoil shaped tubes designed to reduce frontal surface area and decrease drag. Up front they’ve kept the bike narrow, with 1 1/8in top and bottom headset. The brakes are integrated into the frame, the front smoothly concealed within the fork and the rear brake is mounted low down in the frame, on the chainstay behind the bottom bracket. This placement of the brakes is vastly different to that taken in the Bolide.

They’ve worked with Vision to develop a handlebar and stem that is smoothly integrated into the frame, creating a very clear and smooth line from the front of the stem to the aero seat tube. The seatclamp is hidden inside the seat tube. The downtube is curved around the front wheel as is the seat tube, while the seatstays meet the seat tube just about the rear wheel. 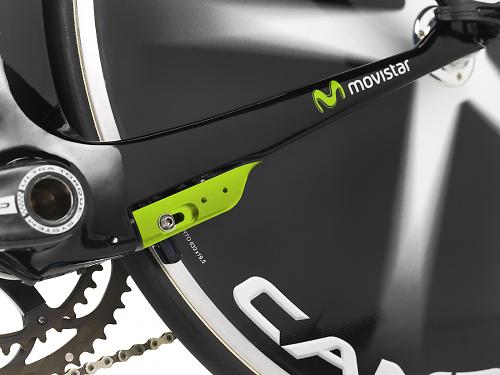 All cables are routed internally and they’ve mounted the Campagnolo EPS battery to the belly of the downtube. Odd that they haven’t sought to make use of Campagnolo’s newly released internal battery. The front mech mount is completely removable so a single ring can be fitted.

Campagnolo have also moved to a BB86 Press-Fit bottom bracket standard on this frame, a step away from the Italian threaded bottom bracket shells used on most of the other bikes in their range.

Pinarello claim they’ve optimised the construction and carbon layup of the tubes to not only improve aerodynamics, but also improve stiffness compared to the Graal. Part of how they’ve achieved this is by using asymmetric chainstays similar to those found on the Dogma. The frame has been made from Toray 65-ton high modulus 1k weave carbon fibre.

No word on pricing or availability yet.