Pinarello have a new time trial bike called the Bolide that they say is 15% more aerodynamically efficient and 5% lighter that the existing Graal used by Team Sky. Bradley Wiggins looks set to ride the new bike in his bid for Giro d'Italia glory.

• The use of new airfoil tube sections. Profiles are designed to ensure the lowest aerodynamic resistance in all wind conditions (frontal, lateral, etc.), as well as, in certain conditions, to generate a forward thrust. 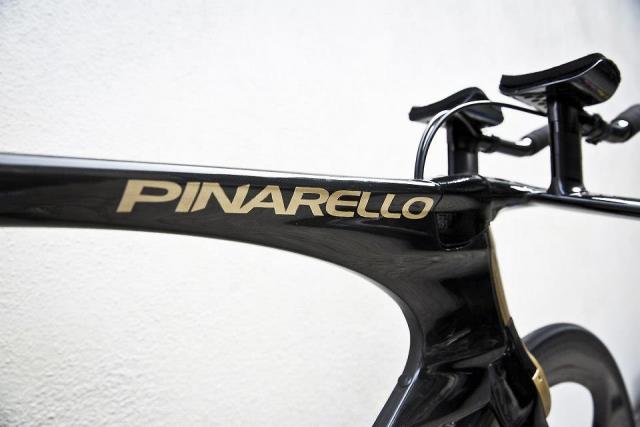 • The use of a “concave back” on the seat tube, to allow a closer position of the rear wheel, significantly improving the airflow in that area.

• Complete integration of the brakes, which “hides” them from the airflow, greatly reducing aerodynamic resistance. 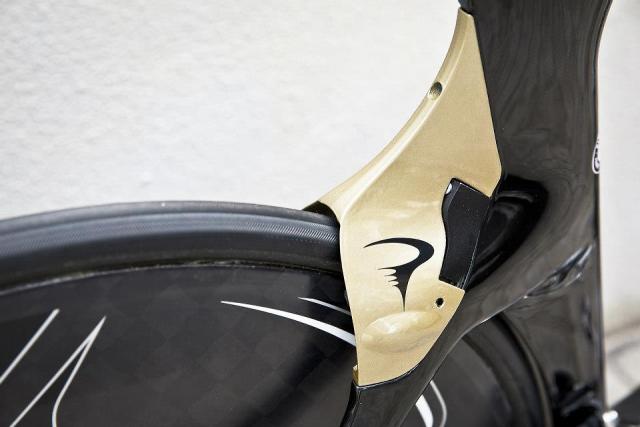 • Internal cable routing that optimizes the interaction between the airfoils and the airflow, in addition to an aesthetic impact, innovative for a racing bike. 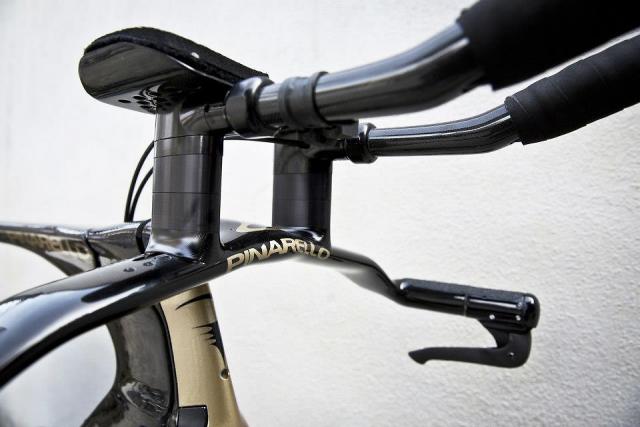 • Integrated handlebar, which gives a unique continuity with the frame and greatly reduce the resistance, compared to a traditional stem and bar.

• The integration of battery and electronic controllers, completely hidden inside the frame.

• Electronic shifter controls integrated into the handlebar, which further reduces the turbulence in the frontal area of the bike.

Those brake covers are interesting. The UCI rules say that you're not allowed to use anything that's purely a fairing and Cervélo have produced separate triathlon and UCI-legal versions of their P5, the UCI-legal version coming without the brake-covering nose cone that looks vaguely similar to the Bolide's front brake cover. The Bolide has UCI approval though, so we're assuming that the covers must be structural in some sense. We'll be interested to hear the full reasoning here.

Pinarello say that the Bolide maintains the frame stiffness of the Graal with a tapered head tube (1 1/8in at the top, 1 1/4in at the bottom), asymmetric chainstays (an existing feature of Pinarello bikes), and an oversized BB86 bottom bracket. They use Torayca 65HM1K carbon fibre that’s been laid up for rigidity with reinforcement in high-stress areas.

The brakes are completely hidden under two covers to reduce turbulence and there’s a new removable front mech hanger. You can remove it for flatter races where you’re only going to use one chainring, and replace it with a special plate. Speaking of gearing, the Bolide is fully compatible with both mechanical and electronic groupsets.

As for the name, the word ‘bolide’ relates to meteors and meteorites. It really means ‘fireball’.

Due to the timing of the release and the fact that Team Sky are all over the publicity photographs, we’re assuming that the bike will make its race debut in the Giro d’Italia.

For more info go to www.pinarello.com