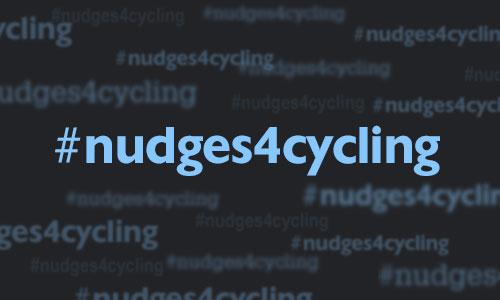 What one small thing would you like to change to improve cycling in the UK? #nudges4cycling, a new social media campaign, aims to get cyclists to suggest those small changes that they think would make a real difference to the quality of cycling life in the UK to get politicians and policy makers to do something about making those changes.

#nudges4cycling is the brainchild of cycling author and campaigner, Carlton Reid. His dealings with politicians and senior civil servants have led him to believe that there is an appetite to help improve the lot of the ordinary cyclist, and that the powers that be really are keeping an eye on what the online cycling community is saying.

He says politicians are more and more convinced of the sense of cycling having a greater role in the transport policy mix, because it's such a cost-effective investment in terms of all the other benefits the follow on from having more bums on saddles  - a particularly attractive proposition when finances are constrained.

The sort of improvements Reid is talking about would be those changes that are relatively easily from a legislative point of view, and which don't necessarily cost much money: making cycle awareness part of the driving test for instance, or incorporating a set minimum distance for passing cyclists in the Highway Code.

He is adamant though that #nudges4cycling isn't an alternative to pushing for the big changes that would revolutionise cycling and public attitudes towards it - instead, they are those marginal gains which could improve things now.

"Sir Dave Brailsford's system of aggregating marginal gain is an example from cycle sport that demonstrates that great things can come from lots of little tweaks," says Reid.

"I want brilliant, Dutch-style cycle infrastructure in the UK. I don't want yet more 'crap cycle lanes'. I'm not holding my breath. Nevertheless I will campaign long and hard for such infrastructure, as I have been doing for the best part of 30 years.

"Rome wasn't built in a day, and nor was Amsterdam's cycle infrastructure. Before we get a UK version of the wonderful Dutch National Cycling Plan there are many smaller fixes that the UK Government and local authorities could do tomorrow," says Reid.

"By all means aim for the big stuff, but let's not ignore lots and lots of the little stuff. That's why I've started the Twitter hashtag #nudges4cycling Some great, simple fixes have already started arriving and I'll compile a list of these to give to the Department for Transport and other relevant Departments."

"Voltaire famously said: 'The perfect is the enemy of good.' In other words, insisting on perfection often results in no improvement at all.

"Watson-Watt was no slouch in the major-innovations-that-changed-history-department yet he too had a thing for “cult of the imperfect." Famously, he advised “Give them the third best to go on with; the second best comes too late, the best never comes.

"Right now we get just crumbs from Government and we don't even get tenth best treatment so third would be rather an improvement.

"#nudges4cycling isn't a cop out or selling cycling short, it's a way of gathering a whole bunch of "marginal gains" in one place and presenting them to the powers-that-be."

To start telling the world about the nudges for cycling you'd like to see, simply take to Twitter suggest a nudge - in 140 characters or fewer - and affix the hashtag #nudges4cycling.

You can make as many nudges as you like, in fact the more the better - Reid would live everyone to give cycling a nudge. A tally of the top nudges will be kept and those watching from the DfT and Westminster invited to act upon them.

Cycle campaigning being what it is, of course, not everyone signs from the same song sheet all the time, and as well as tweets suggesting nudges4cycling, there are also some questioning the point of the exercise; here’s a sample, both for and against:

Dr C. @ChesterCycling
Genuinely struggling to come up with any #nudges4cycling which aren't really just #MinorImprovementsForTheTinyMinorityWhoAlreadyCycle

Jim Davis @lofidelityjim
Stop thinking in terms of #nudges4cycling and come up with a fundamental bicycle network masterplan with design standards.

J-P Stacey @jpstacey
#nudges4cycling grit major cycle paths with same frequency as main roads, so they feel like a viable, reliable alternative all year round

Kate Griffin @griffinkate
Get rid of non-mandatory cycle lanes (the ones with the dashed lines). If it's OK to park a car in them, what's the point ? #nudges4cycling