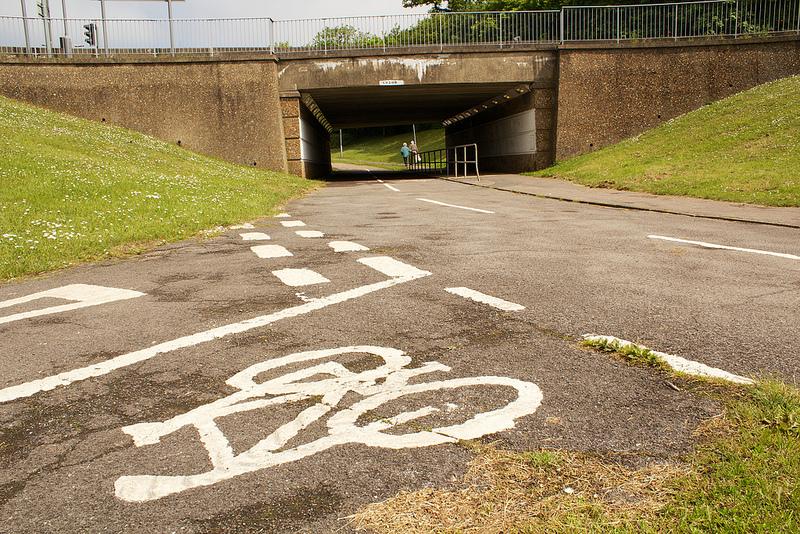 With all the pressure from cycling groups to create model cities for bikes, it will be a surprise to many that one exists in the UK - right under our noses. It's Stevenage.

Carlton Reid, author of Roads Were Not Built By Cars, was the historian at the heart of a BBC One Show special filming project yesterday - looking into the cycle network that time forgot, developed by Eric Claxton in the 1950s and 1960s but little used today.

TV presenter and Paralympian Ade Adepitan fronted the piece, and ordinary cyclists were recruited to take part in the filming.

Adepitan rode an adapted trike on the day.

He told the Advertiser: "It helps when we have got a beautiful day but the great thing is you are on a pathway that is specifically for bikes, with no worrying about cars or roundabouts.

"For accessibility, for wheelchair users, for someone on a handbike like I am, or for any non-motorized wheels, it's perfect. In comparison to everywhere else, it's on a different level."

Bikebiz reports that Adepitan's bike needed some last minute repairs, and Andrew Boyle, sales manager of Edd's Bikes of Stevenage, came to the rescue using tyre cement, a patch and some gaffer tape to fashion a repair to his tube which blew out.

As Reid writes on his book's website:  "Stevenage’s cycleway network was built before the one at Milton Keynes, and was built as an intrinsic and key part of the New Town plan, not an afterthought, as at Milton Keynes. Throughout the 1970s Stevenage was held up as proof that the UK could build a Dutch-style cycle network."

But the town succumbed to 'car culture' - and use of the network declined.

Reid continues: "Stevenage was built for Londoners bombed out of their houses and soldiers returning from war; a New Town “fit for heroes to live in”. The compact, socially-engineered town attracted aspirational residents who bought into the post-war dream of car ownership for all.

"These residents voted with their steering wheels, showing they were happy to live in a town where driving was the absolute norm. The town’s Dutch-style cycling infrastructure did not entice many residents to switch from cars to bikes. Walking was rejected, too. Where driving is easy, Brits drive."

The period when Claxton developed the network, based on the high levels of cycle usage he had observed on segregated networks in the Netherlands, coincided with the rise of mass car ownership.

Reid explains that “to Claxton’s puzzlement, and eventual horror, residents of Stevenage chose to drive, not cycle, even for journeys of two miles or less.”

That's a view echoed by local resident Graham Thompson, 79, who bought his house from Claxton in 1979.

“The cycleways could be used more, but humans are lazy” he said. “They can go by car, so they will do instead of cycling three or four miles.

“I think another thing that discourages people from cycling is the English climate and at work very few places have facilities for changing clothes and storing bikes.

“I have been cycling since 1948 and I think this was the first town with a cycle-path system.

“When I first moved here I was racing so didn’t use the cycleways but as I got older and did it more for leisure I used it get out into the countryside.”

It's all about making things tough for drivers, given the human instinct towards laziness, said Reid.

"If we make it super convenient for all, it will be the motorists who win, so we must stop designing for motorists."

The infrastructure remains largely intact, albeit much underused, and certainly not at the levels envisaged by the producers of the 1966 promotional film for town planners and developers called The Design of Space, part of which deals with Stevenage’s cycleways and has been uploaded to YouTube by Reid.