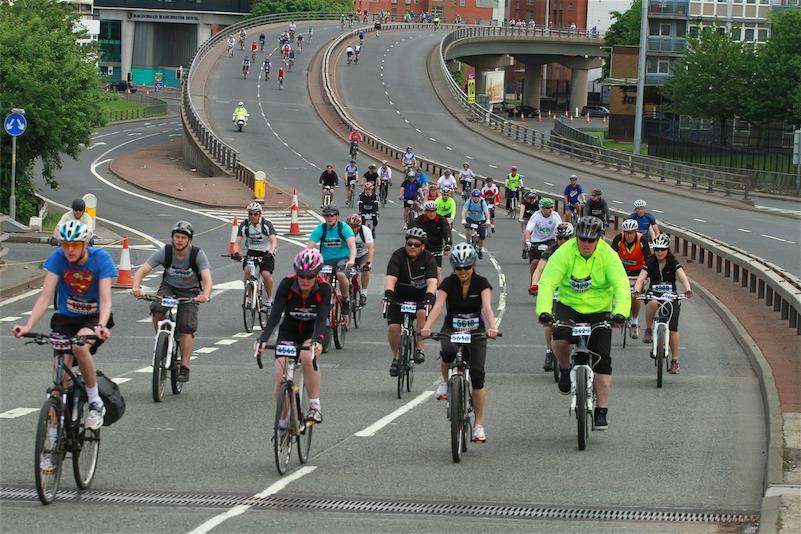 Cyclists can enjoy new views of the city, including a stretch along a closed motorway
by Sarah Barth

The Olympic gold medal track cyclist Joanna Rowsell will be leading out this year's Great Manchester Cycle on Sunday June 30.

Starting and finishing at Etihad Campus, the home of Manchester City FC, the 13-mile loop will give participants the chance to see the city from a whole new perspective as they pass landmarks such as Old Trafford and ride along roads in a traffic-free environment, including the iconic Mancunian Way – a stretch of motorway normally off-limits to cyclists.

The event caters for all abilities, from club cyclists to families who wish to take on the challenge together. Riders have a choice of three routes: ‘A Great Day Out’ over 13 miles, ‘Rule the Roads’ over 26 miles, or for the more established riders, ‘Break Away from the Pack’ over 52 miles.

Rowsell, who now rides for the new women's pro team Wiggle Honda, riding for the newly formed Wiggle-Honda women’s pro-cycling team, said: “Having spent a number of years living and training in Manchester, it's great to see the Great Manchester Cycle returning for a second year as it's such a fantastic event.

“Manchester is one of the best cities for sport and cycling in the UK, so to be able to explore roads on the safety of 13 miles of closed roads will be a really unique experience.

“There really is something for everyone; it’s a platform for club cyclists, families and recreational riders of all abilities to have a great fun day out.”

Last year's event saw some 7,000 cyclists including Olympic champion Rebecca Romero and British national champion Lizzie Armitstead take to the streets, and this edition promises to be bigger yet.

The event was organised by Nova International, which is also behind event’s such as the Great North Run. The company’s communications director, David Hart, commented: “We were thrilled with the reaction to the Great Manchester Cycle, which in its first year, has become the UK’s biggest timed cycling event.

“With the three distances, it was a celebration of cycling on the closed roads of Manchester to suit different levels of ability and we believe this event has a hugely exciting future,” he added.

For further information on the route, event details and how to enter click here.