Germany carbon specialists Haibike have been around since 1996 and having established a good repuation in their home country for well designed performance bikes and engineering know-how, are hoping to make inroads into the UK market. This is the Affair RC, their top-end road bike which packs a smart looking frame, Shimano Ultegra Di2 groupset and 7.19kg (15.85lb) weight for £4,000.

So the German invasion continues. Focus made a big impact when they first arrived many years ago and followed swiftly by the likes of Rose, Cube, Stevens and Canyon. Like those brands, Haibike is big in Germany and is hoping their products will appeal to UK cyclists. And like those brands, they’re driven by engineering and development, with a particular emphasis on carbon fibre all but the entry-level Challenge range - are carbon. This frame certainly has some interesting features. 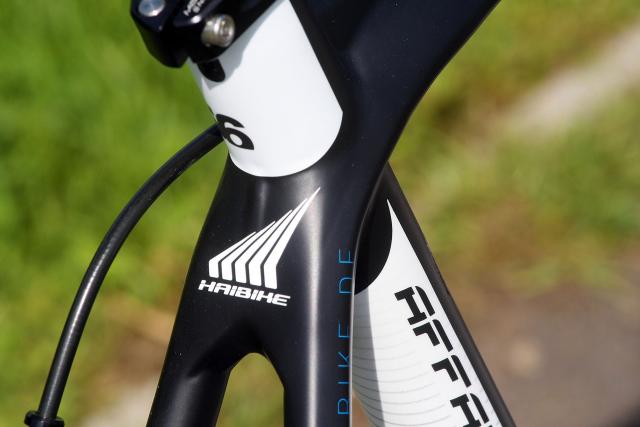 Haibike arrived in the UK this year with Raleigh taking on the distribution. We first saw the bikes at their dealer show back in January, and came away impressed with their design, attention to detail, keen prices, and the fact that they look suitably different from many other bikes out there. Both Raleigh and Haibike are part of the Accell group, a Dutch company which also has Ghost, Koga, Van Nicholas and Lapierre in its portfolio - each though is very much a separate entity. Haibike produce a vast range of bikes, but Raleigh have decided to bring a small selection into the UK, at least for the first year or so. But back to the Affair RC. One thing you can be sure of, it’ll stand out in a crowd. Not just because there aren't many of them about in the UK, but also because I can't remember the last time I saw a blue on black paint scheme like the Affair RC proudly carries. For an indsutry obsessed with red, it's a refreshing change. Underneath the paint is a unidirectional high modulus carbon fibre frame with some very unusual tube profiles.

This is a bike that is all about performance aimed at racers and performance minded riders. Geometry is pretty much a classic race-set up, it's not stupidly low but it's certainly not making any concesions - there's not a tall head tube here, instead everything points to a desire to give you a stiff, efficient pedalling platform. Of course these day top-end carbon bikes also aim to combine these attributes with a measure of ride comfort too, bike designers having realised that comfort carries a performance benefit which increasing levels of carbon manufacturing experise have been able to incorparate. Of course we'll only be able to tell if the Affair RC delivers on that front when we throw a leg over it. 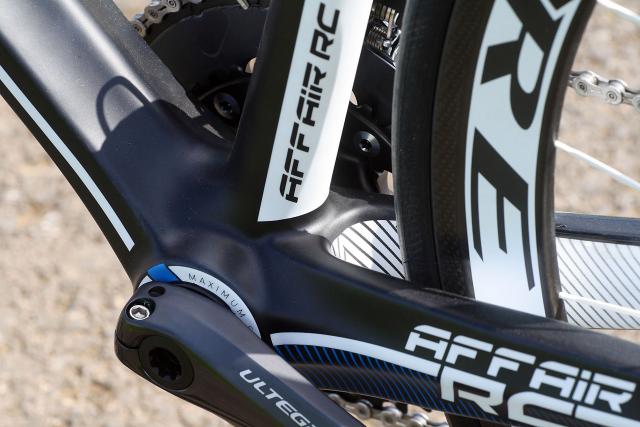 Looking at the frame in more detail, the down tube has a flattened rhombus shaped profile while the top tube is a teardrop shape, with a small fin flicking up to the extended seat tube. All cables are routed internally with the routing designed specifically for the Di2 wires, so it's all very neat and tidy. 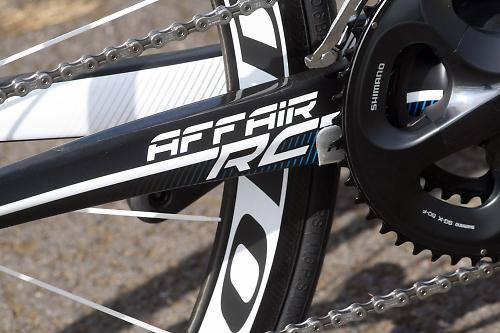 Elsewhere it’s more regular fare, with slender, but not the skinniest, seat stays, joining reasonably chunky chainstays. It all gets very oversized at the bottom bracket, where a PressFit bottom bracket is housed. That bottom bracket and those chainstays hint that this should be a stiff platform for getting your pedalling effort to the back wheel as rapidly as possible, although of course the proof of the pudding will be in the ride. Up front is a tapered head tube, 1 1/8" - 1 1/4", and the seat tube caters for a 27.2mm seatpost.There's a small metal plate on the inside of the chainstay to prevent damage to the carbon from dropped chains. 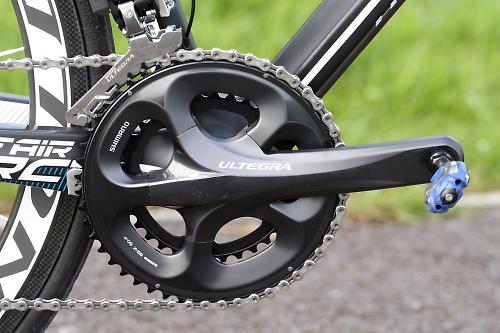 The £4,000 asking price buys a bike equipped with a Shimano Ultegra Di2 6770 groupset with a compact 50/34t chainset - I would expect to see a standard 53/39t on a bike that otherwise appears to have good racing credentials. Haibike are using Shimano’s recently introduced seat post battery, which packages the bulky battery into a cylinder which is hidden inside the seatpost. The battery can be charged without removing the seat post,there’s a small charge port on the control box mounted under the stem. Interestingly from what we can see Shimano don't seem to have considered that some people might want to take the battery out. Maybe they don't keep their bike in the house or their garage, shed, or outhouse doesn't have electricity. You can take the battery out to charge it but the port on the battery doesn't match the one on the Di2 charger, so you'll need to buy a USB plug with the appropriate port. Mind you, you don't have to charge Di2 batteries very often. 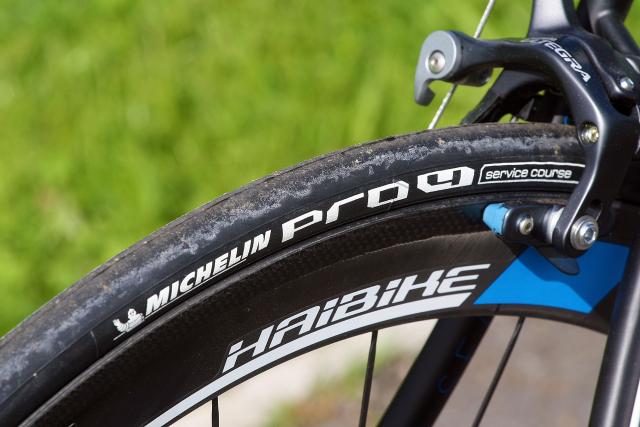 It’s a full UItegra groupset as well, extending to the brakes. The regular brake pads have been replaced with carbon compound pads because the bike comes with Reynolds Assault carbon clincher wheels. These are are a £1,049 wheelset with a 1559g weight. The rim measures 46mm deep and features a full carbon construction. The rims have Haibike’s logo stickered alongside the regular Reynolds logos. Tyres are Michelin’s Pro4 Service Course, an excellent tyre choice as we found when we reviewed them recently. 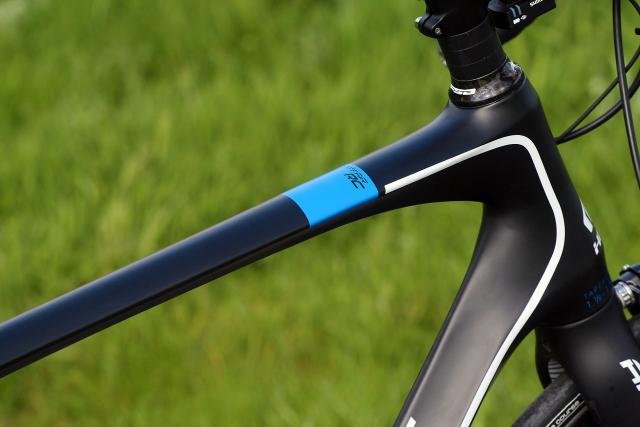 Haibike’s own Carbon Flex Post is fitted into the frame. Inside the post are two channels created by a central panel which allows the post to have a variable wall thickness, so they can make the walls thinner in key areas to facilitate some flex, with that bracing bar keeping it structurally strong. It will be interesting to see if this offers much in the way of vibration absorption. The top of the post has a single bolt clamping mechanism, and has a Selle San Marco Concor saddle fitted, colour matched to the frame. 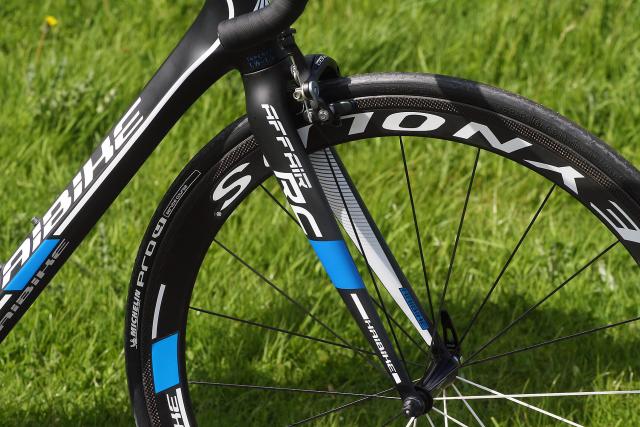 XLC supply the Pro SL stem and Pro SL handlebar and its Haibike’s own bar tape. 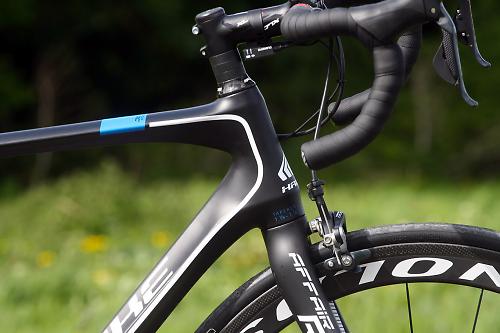 The frame is available in five sizes, this is a 56cm. It has a 56cm effective top tube with a 15.5cm head tube, placing the frame in the racy category of bike design. Angles are 73° for the head and a slightly steeper 74° for the seat tube. The wheelbase is 99.6cm and the chainstays are 41cm.

We spoke of the other German brands that have succesfully moved into the UK market, and so obvious comparisons can be drawn with the Cube Litening Super HPC Race and Canyon Ultimate CF SLX bikes. Both are currently being reviewed by the road.cc testing crew, so we’ll see how the Haibike compares when we get down to riding it.