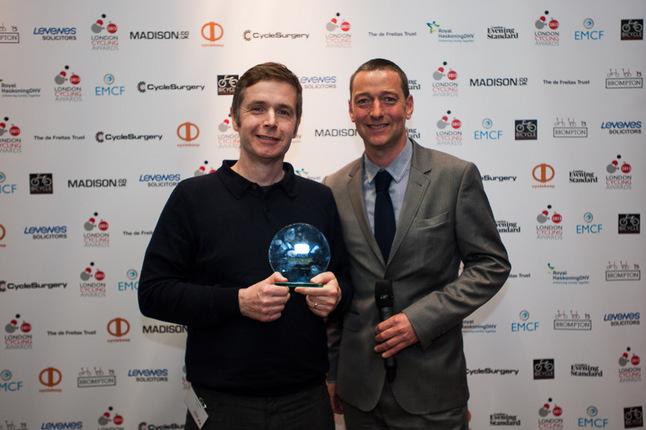 road.cc won the LCC Best Cycling Communication Award at a star studded (well, Ned Boulting was there) ceremony last night in London's West End. The event which took place in the crypt of St Martin in the Fields was split between events voted for by the public and community awards which were decided by a panel of judges.

road.cc's win came in one of the publicly voted awards in which the website were shortlisted - again by the public alongside Cycling Weekly and the Guardian Bike Blog. Commenting afterwards on the award road.cc editor, Tony Farrelly paid tribute to the work of the team behind the website (which was nice) and thanked all those who had voted for the site. "It's extremely gratifying and also rather humbling to win an award voted for by the cycling public but we couldn't' have done it without the hard work and dedication of the team that put the site together - their work is what's made road.cc a site worth voting for."

You can watch our video highlights of the night in the video at the end of this story (okay, make that highlight).

Best Cycling Champion - Sir Bradley Wiggins, Team Sky's talisman was always going to be a hard man to beat following his Olympic and Tour de France exploits. He was up against Andrew Gilligan, London's new Cycling Czar and Jenni Gwiazdowski founder of the London Bike Kitchen
Best Bike Brand - Rapha who beat Vulpine in a closely contested vote
Best Product - Brompton, the folding bicycle born in London, made in London and ridden by lots of Londoners, a popular win on home turf.
Best Retailer - Cycle Surgery, a bike chain with a strong London presence who pipped Brixton Cycles and Velorution to the prize.

While the public awards were a very successful addition to the heart of the London Cycling Campaign Awards is still the community awards in which the organisation seeks to celebrate and support the work of those promoting cycling as a healthier and more sustainable transport choice.

This year there were awards for schools, community projects and workplace initiatives, cycling initiatives and best borough cycling project. All those shortlisted from a very long list of nominations received a highly commended from the judging panel. The quality of the projects shortlisted must have made choosing a winner in some categories particularly difficult and we wouldn't at all be surprised to see further categories introduced for next year's awards. One thing that was also striking was the number of projects nominated that seemed to be based in Hackney.

Best Community Project - The London Bike Kitchen, very popular winner in the room and the award that supplied the evening with its champagne moment (well, possibly Asti Spumante) when one of the winning team produced a bottle of fizz and proceeded to spray the rest plus Ned Boulting, the sound engineer (and her laptop). Ned and the sound engineer took it like troopers.
Highly commended went to: The Poplar HARCA Re(sidents) Cycling Programme that encourages new, lapsed, or infrequent cyclists back on to two wheels in East London; and the Tottenham Hotspur Foundation CycleFUN which got 446 Haringey residents on to a bike or back on to a bike.

Best London Cycling Initiative - Transport for London's Procurement Policy for Safer Lorries. In April 2012 Transport for London re-wrote it's purchasing policies to require all suppliers to take measures to minimise the risks their vehicles pose to cyclists and other road users and TfL will only use transport companies whose drivers have received on-bike training. TfL has also been promoting this policy to the London boroughs and to other large public and private bodies that operate in the capital.
Highly commended went to Sustrans Connect 2 - London Schemes and On bike cyclist awareness training for all Stagecoach's London bus drivers - be good to see this one wheeled out in other parts of the country.

Best Schools Cycling Initiative - Bike Around the Borough (BATB) London Borough of Hackney
In our view the toughest category to call. In the end an inspirational annual event in which school children from across Hackney were invited on a 9 mile round the borough - on it's main roads - 322 took part in 2012 won out over two longer term initiatives; the Tyssen whole school cycling project; and the Try cycling to Virginia project both of which seek to encourage pupils and their families to cycle to school.

Best Workplace Initiative - The Heathrow Cycle Hub
Did you know Heathrow Airport has its own bike shop? And that it's open to the public? Well you do now. It's part of the Heathrow Cycle Hub a successful initiative to boost cycling amongst the airport's 76,000 workers which provides bike parking, servicing, cycle maintenance courses, and a free cycle emergency call out. It's been so successful that the airport is now looking to install even more cycle parking and the hub is looking to expand its services to those who work around the airport's perimeter.
Highly commended went to Ur on ur Bike at the University of Roehampton; and The Guardian's cycle parking facility.

Best Borough Cycling Project - Joint winner Camden and the City of London, two way cycling on one way streets. Both Camden and the City looked to build on work done by Kensington and Chelsea a few years back in opening up one streets to cyclists going the other way, recognising that such streets were barriers to cycling in particular to people being able to put cross-borough routes together.
Highly commended: Ealing Broadway Cycle Hub, more cycle parking, a Brompton bike hire dock have seen an 89 per cent increase in cycle parking and a 32 per cent decrease in cycle theft; and NHS Greenwhich Bike Loan Schem - loaning bikes to encourage people to take more exercise.

Speaking after the awards had been handed out London Cycling Campaign chief executive Ashok Sinha said:
“The awards come at a fantastic time for cycling, and we’re thrilled so many people voted in our new-look London Cycling Awards, and congratulate our winners as well as everyone who was nominated.”

“This has been an amazing year for cycling - more and more Londoners are enjoying cycling for their everyday journeys and it’s clear that cycling has really captured the imagination of the public.”

“This has also been a fantastic year for us, after we gained support from over 40,000 people for our Love London, Go Dutch campaign, which culminated in the 10,000-strong Big Ride.

"As a result, all the mayoral candidates signed up to our Love London, go Dutch vision, and we've seen much of what we asked for writ large in the Mayor’s new Vision For Cycling.

"We've also helped thousands of people cycle through our grass-roots projects, run in partnership with local community groups and businesses.”