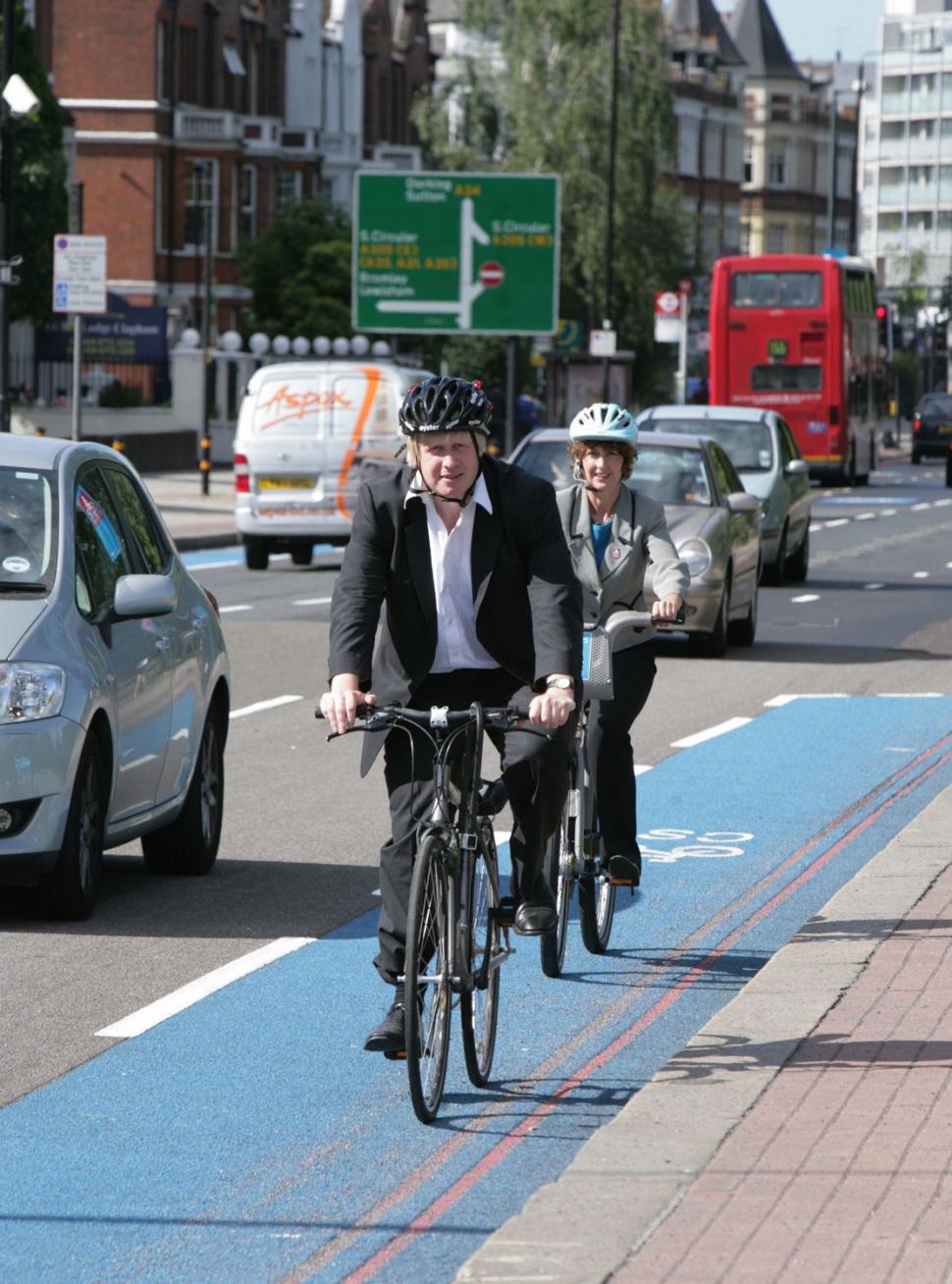 Mayor of London rejects calls to provide helmets with hire bikes and says he doesn't always use one himself...
by Simon_MacMichael

Mayor of London Boris Johnson says he "won't be bullied" into wearing a cycle helmet and has no plans to provide them for users of the Barclays Cycle Hire Scheme, asserting that evidence is mixed as to their usefulness. In an LBC phone-in show hosted by Nick Ferrari, Johnson – more often photographed cycling without a helmet than with one – admitted he doesn’t always wear one himself, preferring a beanie hat, for example, in the winter.

A listener asked Mr Johnson whether he planned to make helmets available to people hiring ‘Boris Bikes’ in the light of London’s second cycling fatality of 2013 earlier this week when Dr Katharine Giles was killed by a tipper truck on Monday.

The mayor - who later in his reply would make the point that helmets afford no protection whatsoever in many incidents - said: "Obviously one cycling fatality is one too many, but the fact is that the numbers certainly this year are not anything out of the ordinary in April.

"What I won't do is take measures that I think will drive cyclists off the roads," he went on.

"What we want to do is make it safer and that means investing in stuff that improves life for cyclists – and for motorists – investing in the roundabouts, in the signalling, but also training people, particularly bus drivers, who I think are doing much, much better over the past few years, but training lorry drivers as well.”

Ferrari asked the mayor: “Next time I hire my Barclays bike, commonly known as Boris bikes, shouldn’t I be forced to have a helmet?”

“No, I don’t think so," he replied. "The evidence is that in Australia, where they made helmets mandatory, actually what that led to was a decline in cycling overall.

“I know people get very worked up about this, but actually the evidence about the usefulness of cycle helmets is mixed.

“I do encourage people to wear one. I generally wear one in the summer. I don’t always wear one myself, I didn’t wear one to come here today because I wear a beanie hat in winter.”

“But that’s not going to protect your head if you have an accident,” Ferrari pointed out. What example are you setting to younger cyclists?”

“The evidence, as I say, is mixed about the usefulness of cycle helmets,” replied Johnson. "If you look at some of the fatalities we've had, I’m afraid it's not clear that they would have been saved by a cycle helmet.

“I don’t propose to make them mandatory.  As I say, I do sometimes wear one – I am nothing if not inconsistent in this matter. But when it’s cold, I don’t.

"I'm not discouraging anybody from wearing a cycle helmet if they want, loads of people do, but all I'm saying is, no I'm not going to make it mandatory because I think on balance there are other things we can do to make cycling safer, and that is what we are doing."

Johnson’s predecessor as mayor, Ken Livingstone, said ahead of last year’s London mayoral elections that when he first gave he go-ahead to what would become the Barclays Cycle Hire Scheme, he envisaged helmets being supplied along with the bikes.

“It was always the plan that you should make certain that people who are cycling have got a helmet. You almost want to have a way where the helmet is actually chained to the bike, so people who don’t bring one can have one.”

As we reported last month, Victoria’s state government is to trial providing free helmets to people using the bike share scheme in the Melbourne, with Australia’s mandatory helmet laws believed to have discouraged uptake of the scheme, launched in 2010.