We’ve covered Taipei International Cycle Show extensively here on road.cc over the past week or so, but there are still plenty of interesting products that we’ve not managed to tell you about. Here, we’re going to crack through a whole bunch of them.

Topeak’s new PanoBike Series products allow you to turn your iPhone 4S or 5 into a bike computer with a free app from the Apple Store. 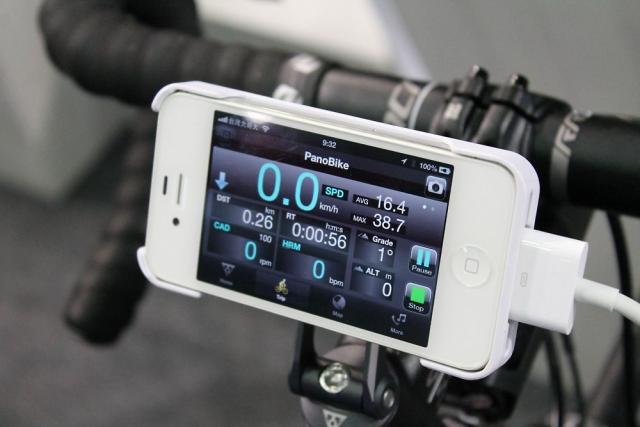 You get all the usual measurements – speed, distance, time, gradient and so on – along with GPS mapping. You can also get heart rate info if youbuy the PanoBike Bluetooth Smart heart rate monitor. 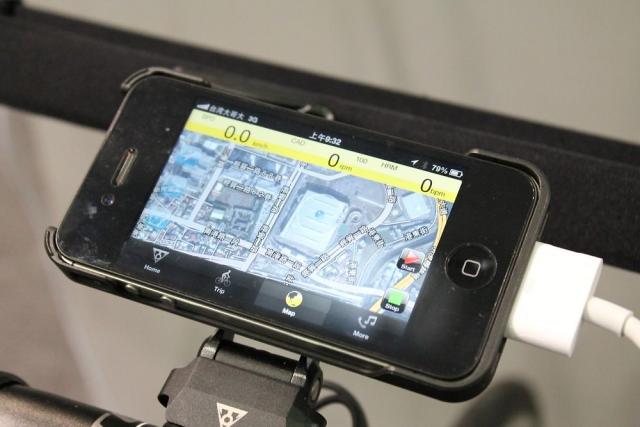 After your ride, you can check out all the data, see your speed, altitude and heart rate plotted on charts, and review your ride on the map view. This is Topeak’s Mobile PowerPack 5200mAh, a high-power rechargeable backup battery pack that straps to your stem. Topeak reckon it’ll recharge your iPhone (or other smartphone) up to three times to extend the time you can use the PanoBike system. You can also buy a PanoBike Speed and Cadence sensor and a RideCase to mount your iPhone to your bike, but we don’t have UK prices yet. Topeak’s UK importer is www.extrauk.co.uk. 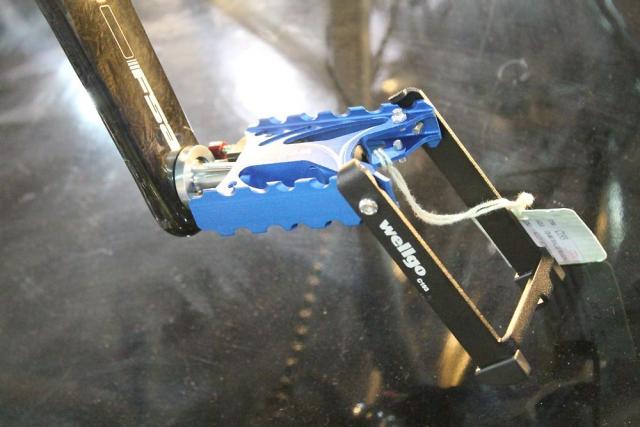 Quick question for you: what manufacturer makes the most pedals in the world? To be honest, the picture might have given it away. It’s Wellgo. The C193 features an outer cage that doubles up as a kickstand so you can… well, it’s pretty obvious, isn’t it? It weighs 280g and a sprung rod holds the flippable piece securely in place when you’re riding. Wellgo’s UK distributor is www.i-ride.co.uk. 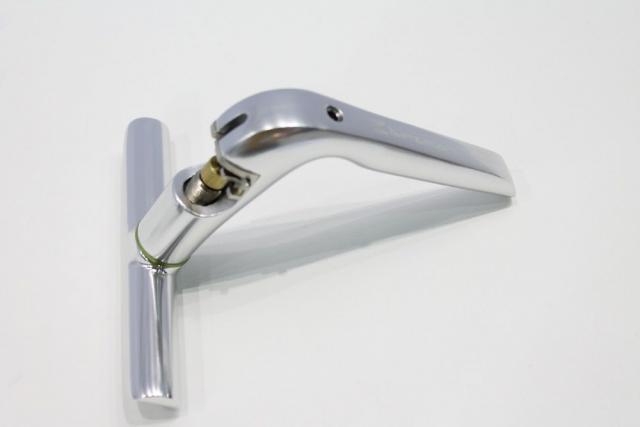 Birzman’s Dragonfly Chain Rivet Tool isn’t new but it is pretty and that’s plenty good enough for us. It’s CNCed 6061 aluminium and the rivet pin is replaceable. At £49.99, it’s not cheap but, ooh, it is shiny. Birzman’s UK distributor is www.i-ride.co.uk. 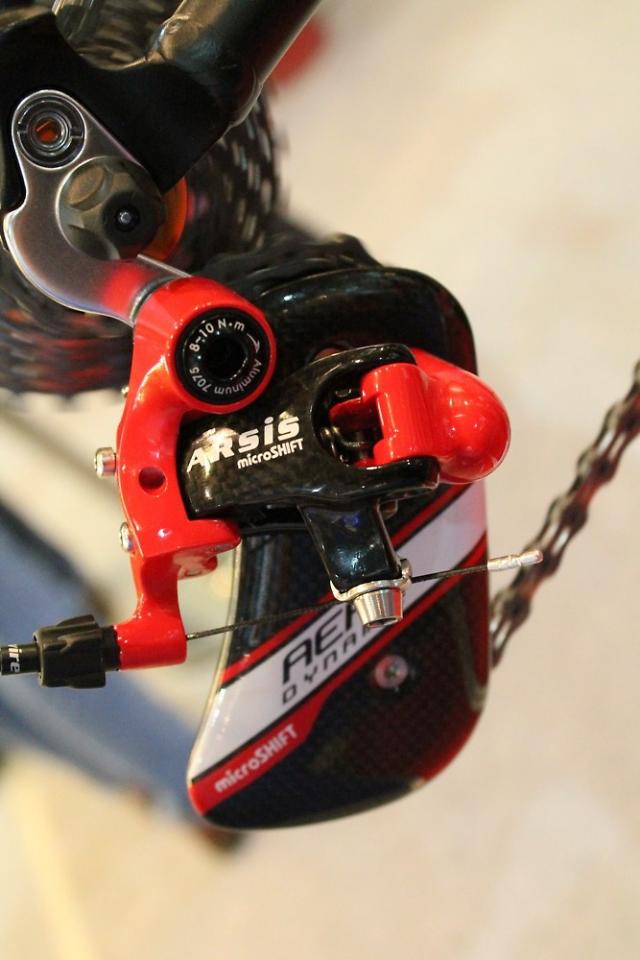 Taiwanese brand Microshift have a helluva job trying to break the triopoly (okay, I might have just made that word up) of Shimano, SRAM and Campagnolo, but this aero version of their top-level Arsis rear mech is certainly an eye-catcher. With the big three groupset manufacturers having patents on their own gearshift systems, for drop-bar shifting Microshift use two different levers tucked behind the brake lever – one for upshifts, one for downshifts, obviously. Hey, check out this brakes from KCNC. What do you make of it? We don’t have any details yet other than that it'll come in a whole range of different colours. 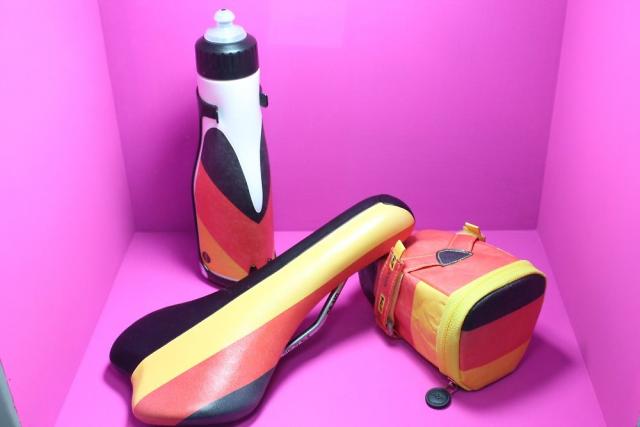 Taiwanese brand 147 Design do saddles (see main pic), seat packs and bottles in a whole bunch of different designs. Going for the whole ensemble might be a bit too much. And in other cases, going for any of it might be a bit too much. I’ve not had any Smarties in years. As far as we know 147 Design don't have a UK distributor (let us know if we're wrong). This is the recently launched Strida Evo 3. It’s a folding commuter bike, the idea behind the unusual shape being that it allows you to sit in a very upright position. This version has a 3-speed gear system and you shift by pedalling backwards. It’s belt drive so there’s no oil to get on your clothes, and mechanical disc brakes take care of stopping 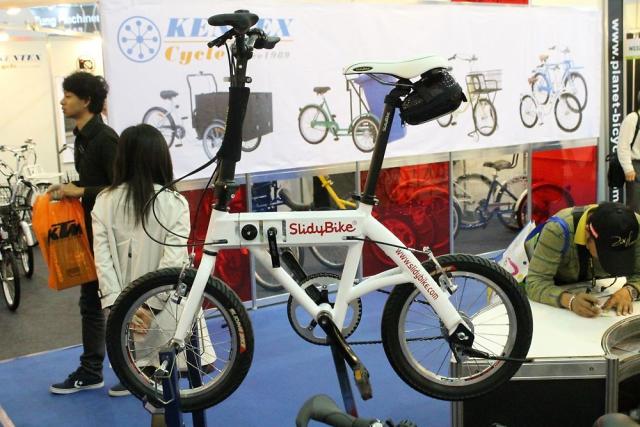 The Slidy Bike is so called because you can flip that lever on the central strut and slide the two ends further apart. There are several different models available that work on a similar concept, including an electronic assist version.

We’ve shown you Prologo’s new CPC saddles before and we should have a couple in for review on road.cc shortly. The difference from normal saddles is that they come with a fabric on the top that’s designed to hold you in place – CPC stands for ‘Connect Power Control’.

We’ve not used the saddles yet but we have used the mitts that feature the same fabric on the palms, and they certainly provide a whole lot of grip. Prologo's UK importer is www.i-ride.co.uk.