Sagan the pre-race favourite - but will Boonen bounce back or Cancellara take his chances?
by Simon_MacMichael

It's Easter Sunday this weekend and for cycling fans, that doesn’t just mean chocolate, it also means the Tour of Flanders, celebrating its centenary, although gaps during the World Wars mean this is the 97th edition. As ever, there are some big questions going into the second Monument of the season that will only be answered once the winner crosses the line in Oudenaarde at the conclusion of the 256.2 kilometre race.

Those include whether defending champion Tom Boonen can clinch a record fourth victory or Fabian Cancellara, who crashed out 12 months ago, will become the sixth man to win the race three times – and of course, they will also face the challenge of an in-form Peter Sagan, fresh from winning his first Classic and the favourite on Sunday according to the bookmakers, as well as others with their eyes on the prize.

The controversial changes to the parcours introduced last year saw the finish move from Meerbeke, on the outskirts of Ninove, to Oudenaarde, with the parcours as a whole featuring 17 pavé sections and 16 climbs, most of them cobbled and including three ascents each of the Oude Kwaremont and the Paterberg. 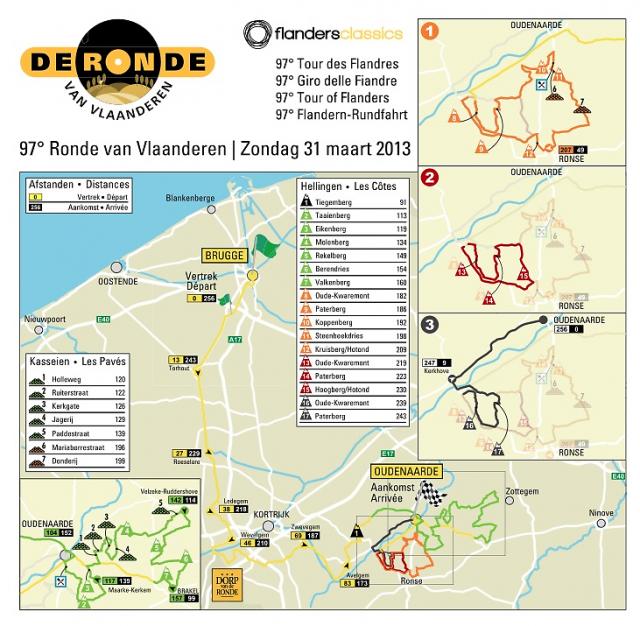 The podium last year was decided on the third and final ascent of the Oude Kwaremont, when only Boonen and eventual runner-up Pippo Pozzato proved able to respond to an attack from BMC Racing’s Alessandro Ballan, who would finish third.

Prior to that move, Cancellara’s crash in the feed zone deprived fans of the chance to see him and Boonen go head to head on a course missing the climb of the Muur van Geraardsbergen where the Swiss rider had dropped his rival on his way to winning the 2010 edition.

With Boonen’s start to the 2013 season disrupted by surgery on an infected elbow and the Omega Pharma-Quick Step rider possibly still suffering the after-effects of a crash in last weekend’s Gent-Wevelgem, Cancellara, winner of the E3-Harelbeke last week with a trademark attack from more than 30 kilometres out, is the better bet of the pair.

He doesn’t lead the betting, though – that dubious honour goes to Cannondale’s Peter Sagan, who was also the red hot favourite ahead of Milan-San Remo, where he was pipped to the line by MTN-Qhubeka’s Gerald Ciolek. No-one was able to stay with Sagan at Gent-Wevelgem, however, and it’s worth noting he came home in fifth place at Flanders 12 months ago on the same course that will figure on Sunday.

That underlines one feature of the race – while it may at times produce an unfancied winner, it’s seldom a surprise one in the sense that those who win will have done well in previous years – 2011 champion Nick Nuyens, for example, had previously finished second in 2008. The former Saxo Bank rider missed defending his title last year through injury, but he’s back with Garmin-Sharp this time.

One of last year’s podium finishers, and another past winner of the race, BMC Racing’s Alessandro Ballan, is out, however, following his horrific pre-season crash in Spain, and with Philippe Gilbert also out, the hopes of their team – and Belgium, presumably, if Boonen isn’t 100 per cent fit – will rest with team mate Greg Van Avermaet, fourth 12 months ago.

Unusually, given the internationalisation of the sport, Flanders is a race in which home riders still dominate the list of winners – eight of the past ten editions have been won by a Belgian, two of those by RadioShack-Leopard’s Stijn Devolder. While the chances of his adding a third victory can’t be discounted, his career has never returned to the heights of those back-to-back victories in 2008 and 2009.

Besides Belgium, the most successful country in terms of wins is Italy, with 10 successes – hopes of an 11th victory this time around rest on riders including last year’s runner-up Pippo Pozzato of Lampre-Merida, second at Roma Maxima but who missed getting into the final group at San Remo, plus Vini Fantini-Selle Italia’s Oscar Gatto, winner of Dwars Door Vlaanderen last week.

Katusha’s Luca Paolini is another Italian in a rich vein of form – he was the winner earlier this month of the Omloop Het Nieuwsblad, fifth at Milan-San Remo and eighth in the E3-Harelbeke, and it’s worth noting he was seventh at Flanders last year.

Team Sky are hoping for something big from this year’s Classics campaign, and to date British champion Ian Stannard has pretty much been a fixture at the front of each race he’s been in, including that storming ride at Milan-San-Remo.

It’s a former wearer of the national champions' jersey, though, upon whom British hopes are pinned – Geraint Thomas, who in his last participation in 2011, finished 10th in what is his favourite race. His preparations for the Olympic team pursuit last year meant he missed the Classics.

This year, a crash ahead of the Cipressa ruled him out of the finale at Milan-San Remo, and while he's been riding well - fourth at both the Omloop Het Nieuwsblad and the E3 Harelbeke - there's a feeling that he's been holding something back for Sunday.

As for Omega Pharma-Quick Step, with Boonen possibly struggling with injury, the focus could be upon Sylvain Chavanel to conjure up a result - he's come close before and comes to the race again in great form, including a stage win in Paris-Nice, getting away with Stannard in Milan-San Remo, and having successfully defended his title at the Three Days of de Panne this week.

Like we said earlier, though, with the inevitable attrition caused by those cobbles and climbs and the potential misfortune of a crash or puncture at a critical moment, there’s always a chance that the winner will come from the ranks of those whose names don’t figure much in the pre-race talk… so when picking your Fantasy Cycling team, then, it could pay to cast your eyes over past years’ results to see who has gone well here.

1
"Check the Highway Code": Police officer claims cyclist shouldn't ride "in the middle of the road"
2
Driver "used bus as a weapon" against cyclist, loses appeal over sacking
3
Hit-and-run driver moved unconscious cyclist off road before fleeing scene
4
Road rage van driver who assaulted cyclist, knocking him unconscious, handed suspended sentence
5
Why was Mark Cavendish riding with Lance Armstrong this week?
6
Five-year-old boy killed after van driver knocks him off bike
7
Want the “fastest socks on the planet”? They’re yours for €1,000 + more tech news from Campagnolo, Rapha, Van Nicholas...
8
Near Miss of the Day 827: Bus driver “bullies his way into a gap that was never there”.