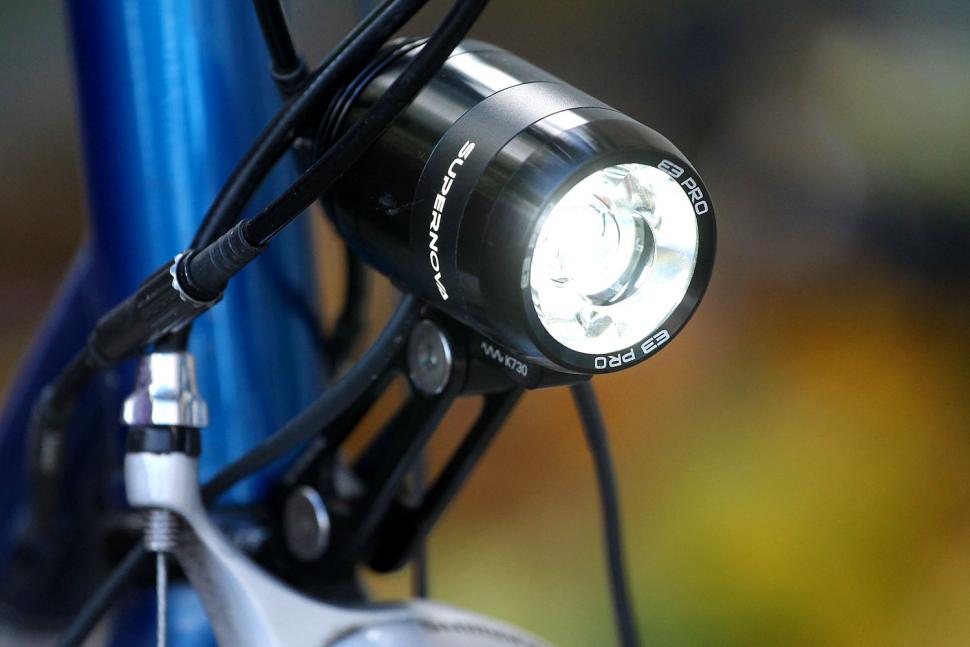 We tested the Supernova E3 Pro last year and it received high praise. Supernova isn't a company to rest on its laurels though, and the new version of the Supernova E3 Pro 2 dynamo front light is even better. If you want a fit-and-forget light for your everyday bike, this is about as good as it gets.

Dynohubs used to be the preserve of gnarled Audaxers and their ilk, but times are a changin'. You can pick up a really good dynohub for far less these days, and more importantly LED technology has improved to the point where the 3W a hub will generate is enough power for some serious illumination. So much so, in fact, that dynamo is making its way into mountain biking; check out Exposure's 800-lumen Revo. I've been using the Shutter Precicision PV8 for testing this light, which at £90 is a good buy. Supernova use the SP internals in their own hubs.

The E3 Pro 2 is visually very similar to last year's light, except that the logo is in a ring around the light rather than printed on the side. That's not just a cosmetic change; the logo is translucent and lights up when you're in motion, providing a useful amount of side visibility. That's a major improvement over last year's model that wasn't visible from the side at all. The light is beautifully constructed from aluminium and fully rebuildable in the event that you need to replace any part.

The lens is Supernova's Terraflux 2 unit, which is a German road-legal beam that directs 95% of the light downwards to avoid blinding oncoming traffic. Output is stated at 305 lumens. There's a single button to turn the light on and off, and a wire for the dynamo with an output loop to link the E3 with a tail light. The wiring is excellent quality, and Supernova supply plenty of heatshrink for waterproofing cable junctions.

We used the E3 with a multimount adaptor, which allows you to fit the light to the fork crown (through the mudguard mounting hole) or behind a calliper brake with an additional bit, which is the route we took. You can also get a bar mount (we used this last year) and mounts for V-brake and disc-equipped bikes. Fitting it is simple enough and the Aluminium strut is sturdy and adjustable, with two pivots to get the beam just where you want it.

Out on the road the E3 is a joy. Once you're over about 5mph the beam is steady, reaching its maximum output by about 8mph, so when you're rolling along there's hardly ever a time the light isn't on full power. Out of the saddle up the steep stuff you can see the beam waxing and waning a bit, but that's it. The Terraflux 2 lens has a refined beam pattern over last year's model, say Supernova, but I'd be hard pressed to tell. Like before, the beam pattern is more or less ideal for road riding, with the majority of the light concentrated directly ahead of you but still enough throw for picking out turns and suicidal rodents in the verges.

Because all the light is directed down none of it is really wasted, so the light feels brighter than its rating. You have to be going pretty quick to feel like you can't see enough. The mounting position of the light (lower down than the bars) makes bumps in the road and potholes a bit more visible as they throw more of a shadow, which I found quite useful. On shared use paths I found that the lack of upward illumination meant that it wasn't as easy to pick out pedestrians quite as quickly, but it wasn't a major issue.

The E3 has a built-in standlight that powers the light (and a rear one if connected) for ten minutes or so if you stop. That's handy, but my one minor gripe is that you can't turn the standlight off when you park in town. That might not be an issue in enlightened Germany, but I can't help feeling that outside the Coop in [insert dodgy area of your town here] you're taking a chance that someone will try to make off with your light. Supernova told us that it's wired that way to ensure the longevity of the capacitor, which allows them to give the light a 5-year warranty.

At £145 for the E3 Pro 2, £50 for the matching tail light (review to come) and say £90 for a dynohub, you're looking at an outlay of nearly £300 without factoring in the cost of getting your front wheel built up. That's not small change, but these are well-built, rebuildable units with a long warranty and near-perfect beam pattern and performance for road use. You'll never have to worry about where your lights are, or whether they're charged, ever again. If you want fit-and-forget lights for just one bike that you use year-round, or a powerful, reliable system for touring or Audax, you'll not regret speccing the E3.

Oh, and it comes in eight colours too.

The E3 Pro 2 is the improved successor of the workhorse of our product line. No other light sees as much action as this one. This lamp is used as daytime light in the heat of California, has to withstand British weather conditions all year round and each winter has to endure the salt on German roads. The E3 Pro 2 accompanies bike travellers to the most remote regions of the globe as reliably as it lights the way of commuters on their daily way to work. Its extremely bright light provides great safety in traffic and leaves no pothole and no shard of glass unlit. The new side-illumination greatly increases the safety in traffic and the brightly glowing Supernova logo is a real highlight you will enjoy a lot.

One button, one setting.

Plenty of options, the brake bolt mount is secure and leaves your bars free.

No issues despite some dismal weather.

Fit and forget, mounting position keeps it out of the way too.

You have to factor in the weight of a dynamo.

The fact that the standlight can't be turned off.