Velocite have branched out from producing bikes and have launched the RT50, a carbon fibre 50mm wheelset designed for Road Tubeless clincher tyres. They weigh 1,630g and will cost £1,499.

Road Tubeless was created by French tyre manufacturer Hutchinson a handful of years ago, but despite showing much promise, it’s fair to say the demand hasn’t matched that potential. That’s slowly starting to change though, and at Eurobike last year we spotted Schwalbe’s Ultremo ZX tubeless tyre. In testing they found it to be faster than any tyre they’ve produced before, and also reckoned they had solved the big problem facing tubeless adoption, the ease (or lack) of fitting the tyres to the rims.

Tubeless promises to be more puncture resistant, as there’s no inner tube to be pierced by glass. Mountain bikers have been using tubeless already for many years and the technology is well proven there. Another benefit is an improved ride quality, generally being described as more supple. And you can also run the tyres a little softer as well. The downsides are a current lack of choice and availability, extra maintenance and they take more time to fit the tyres than clinchers (but a lot less than gluing tubs), and the sealant needed to fix any punctures while you ride is just messy. 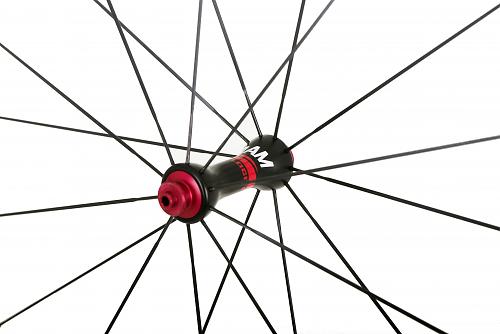 And there’s now a few more rims on the market. But carbon fibre deep-sections? Nope, you don’t see many of them about. Hutchinson produced the RT1, the first ever deep-section Road Tubeless wheel. But the Hutchinson website doesn’t show them anymore. 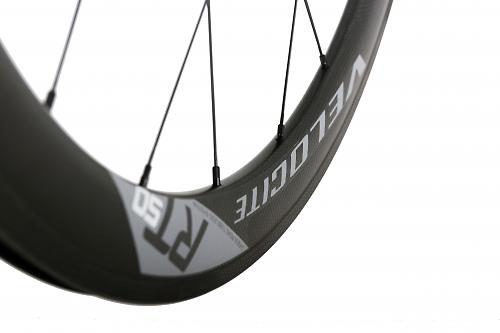 So we reckon it’s safe to say these are very rare wheels. The feature a 50mm deep rim with a 23mm cross section, and are finished with a 3K carbon fibre and are clear coated with a matte finish. The decals are removable, should you want to save a bit more weight. They’re also reflective. The rims are constructed using a high glass transition temperature resin, to ensure they can cope with the high temperatures produced by braking forces. They tested them up to 192  deg on their lab machines. 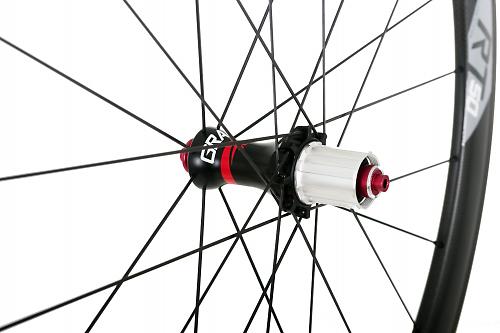 The hubs are their own design, they call them the Velocite Gram. Spokes are 20 front, 24 rear, radial on the front wheel and rear wheel non-driveside, two-cross on the driveside.

Here's a video showing the wheels being tested.

They’re due in the UK this month (which means they’re still on the water) and pre-orders are currently being taken. Interested? You can contact Velocite directly via their UK distributor on
01938 810873 or shop@velocite-bikes.co.uk