This is Cannondale Pro Cycling team Cristiano Salerno’s Cannondale SuperSix Evo, which he raced at the recent Tour Down Under. The Evo is one of the lightest frames in the peloton and it's dessed with SRAM Red, the lightest groupset currently available.

Salerno is a 27-year-old Italian who has ridden for the old Liquigas team since 2011. At 63kg, climbing is his forte and he has one of the best bikes for tackling the mountains. He’s 181cm tall and rides a 56cm Evo. His reach from the saddle nose to bar centre is 60cm, which requires a long stem. His bottom bracket centre to saddle top is 778mm. The SuperSix Evo is a sub-800g frame, making it very easy to get down to the UCI’s 6.8kg minimum weight limit - so much so that the team mechanics have to fit weights to ensure the bikes don’t go under this limit.

SRAM continue to sponsor the team and at the Tour Down Under they were running the latest iteration of their flagship groupset, Red. Introduced last summer, this is currently the lightest groupset on the market, and it may be for some time, with Shimano and Campagnolo concentrating their efforts on electronics and fitting extra sprockets to the cassette. 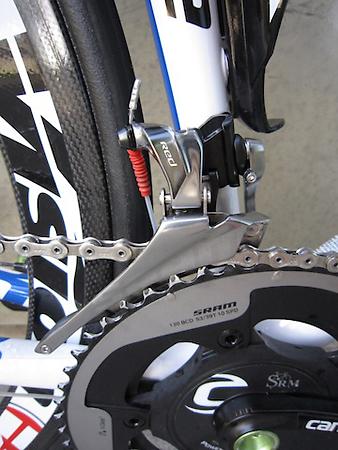 An upside to the low weight of the Evo is being able to race with an SRM power meter. Previously teams would only train with power, then switch to lighter cranks for racing. We’re increasingly seeing team bikes with SRM power cranks fitted for racing as well. Makes sense, if you’ve have the freedom of weight to fit one, why wouldn’t you want to analyse the power from races? Cannondale’s own Hollowgram SISL2 crankset is used - again, one of the lightest out there - with SRAM Red chainrings fitted.

In fact, the only change for the team is switching from Mavic wheels of last year to Vision wheels this year. This is the TC50, a carbon fibre tubular with a 50mm rim depth.

The team remains with Vision’s parent company FSA for the stems, handlebars and seatposts. 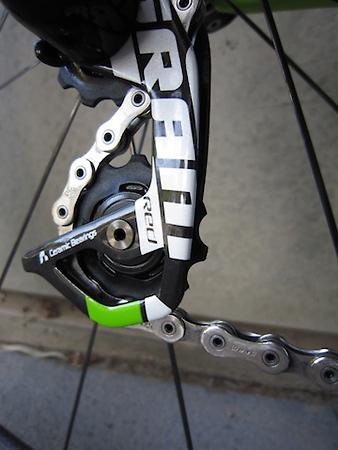 This is a nice touch. SRAM have given the team custom painted brake levers and rear mechs to match the colour of the frames.

Here’s a slickly produced video of the new team bikes.

Thanks to SRAM for use of the photos.