We don’t cover Massi bikes often on road.cc but we got the chance to check out the 2013 range at The Bike Place industry show at Silverstone earlier in the week week.

There are three different road frames in the range: the Pro SL, the Pro and the Team. You can have each of them built up in a whole range of different component specs, so the complete bike prices range from £1,589 through to £7,999.

The top-level frame is the Pro SL (main pic). It’s a monocoque made from ultra high modulus carbon fibre – the dropouts are carbon too. Like most high-end performance bikes these days, the Pro SL comes with a tapered head tube (1 1/8in to 1 1/2in) and a press-fit bottom bracket. The claimed frame weight is just 860g while the fork is 330g. 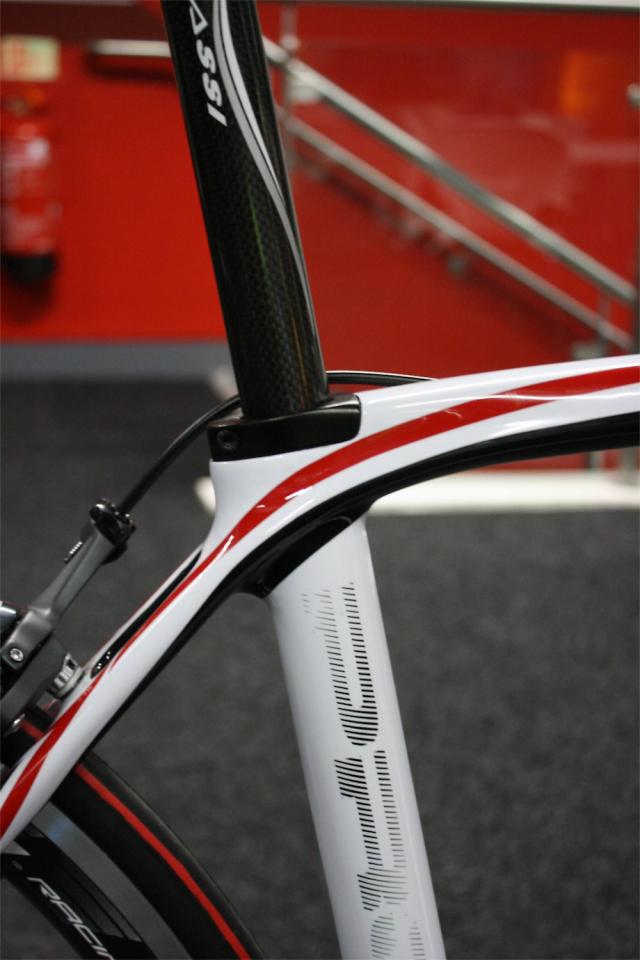 The Pro SL is available in an Electronic version that’s suitable for both Shimano Di2 and Campagnolo EPS groupsets. Then there’s the Twin System version that can be built up with either electronic or mechanical groupsets.

Massi offer a whole load of builds. A full Shimano Ultegra Di2 build on the Pro SL, for example, is £4,699. That compares to an ‘Ultegra mix Di2’ price of £3,799, where you get mostly Ultegra Di2 parts but non-Ultegra components thrown in, like cheaper brake callipers, to keep the price down.

The Pro is built to the same geometry as the Pro SL but there are a number of differences. The head tube is 1 1/8in to 1 1/4in, for example, and there’s a standard seat collar rather than an integrated design. The frame is still very light, though, at 940g. The cheapest complete bike is £2,199 for a Shimano 105 Black build, although prices go right up to £6,999 for Dura-Ace Di2 or Campagnolo Record EPS. 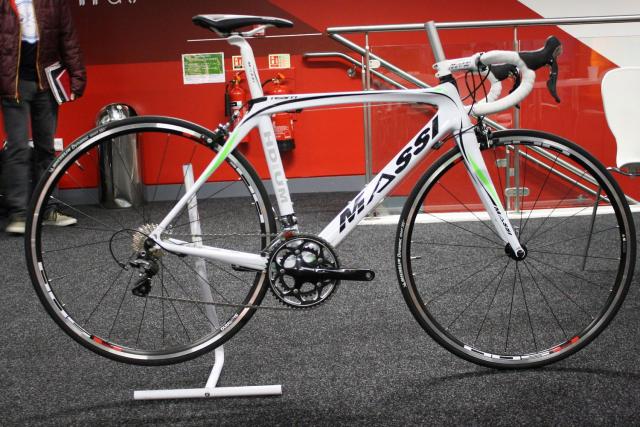 The third bike in the Massi range is the Team, which is high modulus carbon fibre rather than ultra high modulus, and it lacks some of the top-end features. You get a straight head tube, for example, and a standard bottom bracket. The frame weighs in at 1,195g while the fork is 495g. You can have the Team built up in Shimano Tiagra components for £1,589, or go right up to Dura-Ace for £3,999. If none of the standard builds is quite what you’re after, the Massi Kit Concept allows you to spec exactly what you want on any of the bikes in the range, and it’ll be delivered to your dealer within five days. You choose the bike closest to the spec you want and they’ll make the required changes for you and adjust the price accordingly. As well as choosing stuff like the cassette size, stem length and so on, you can have details like the bar tape colour that you’d prefer. All the Massi bikes come with pedals, by the way – Look Kéo compatible in the case of the road bikes. 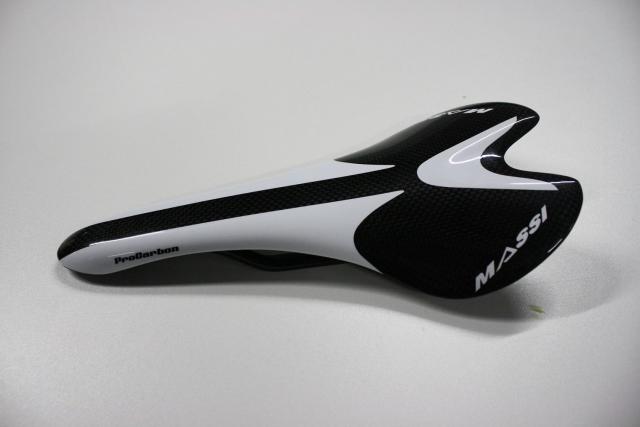 One final thing we saw from Massi was this full-carbon saddle, weighing in at just 85g.

For more info on the range go to the R53 Sport website.