Details of the three stages the 2014 Tour de France have been revealed by Tour organisers ASO at a press conference in Paris, as expected Stage 3 will be from Cambridge to London and will go through the Olympic Park (as predicted on road.cc earlier this month) but the finish will be a gallop down the Mall.

Yorkshire though will be the main focus of the race in the UK, the county hosts the Grand Depart and we now have route maps and a list of all the main towns and villages that the first two stages will pass through - see below. More information about the Yorkshire stages, and the Cambridge to London stage, will be revealed later at a press conference at Leeds Town Hall followed by a Grand Depart party. 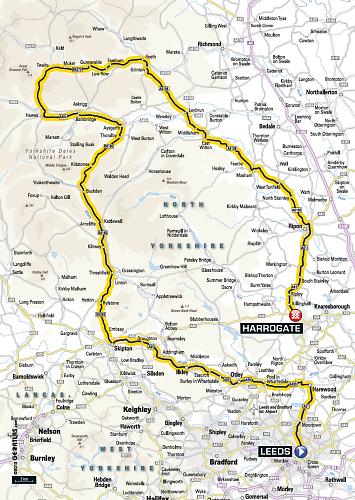 Stage 1: Saturday 5 July 190Km Leeds - Harewood - Otley - Ilkley - Skipton - Kettlewell - Aysgarth - Hawes - Reeth - Leyburn - Ripon - Harrogate. The first stage takes the riders through the Yorkshire Dales and over two categorised climbs for what is expected to be a sprint finish in the North Yorkshire town of Harrogate, although it's lumpy that you wouldn't discount someone having a go and trying to grab some time in yellow. Stage 2: Sunday 6 July 200Km York - Knaresborough - Silsden - Keighley - Haworth - Hebden Bridge - Elland - Huddersfield - Holmfirth - Sheffield. The riders will need their climbing legs on today. Stage two includes 1050 metres of climbing in last 60k - the last climb is just 5km from the finish and as you'd expect in that part of the world some them are steep 14% has been promised. Cragg Vale climb - Mytholmroyd (B6138) to Blackstone Edge - the longest continuous ascent in England. At 4.86 miles is amongst it's a minnow by Tour standards but it will give the riders a chance to warm up their climbing legs for later in the race as will Holme Moss which is tough no matter who you are. 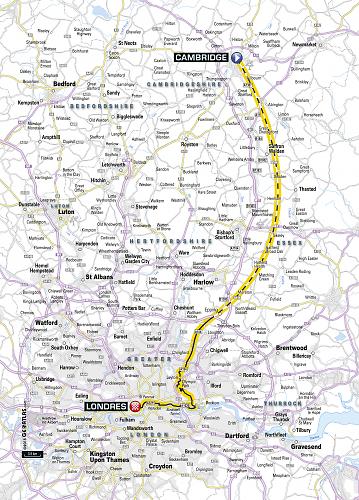 Stage 3: Monday 7 July - 169Km Cambridge - Saffron Walden - Epping - Woodford Green - South Woodford - Walthamstow - Leyton - Olympic Park - Docklands - Embankment - The Mall. Start in Cambridge and finish in Central London with, if all goes to plan, what should be a mass sprint finish on the Mall at the end of a pretty flat stage. There aren't many lumps between Cambridge and London - although it isn't completely flat either - but it should be flat enough to be a welcome relief for the peloton after what are should to be a couple of punishing days in Yorkshire.

The route from Cambridge is expected to take the riders down through North Essex, interestingly the route north of the M25 is stil to be confirmed - given the stated distance it is going to have to deviate from the dotted line on the map by around 40 miles. Our best guess at the moment is that it will swing south east from Cambridge down through Linton, Haverhill, and Halstead before skirting Braintree and heading over to Bishops Stortford, then Harlow. We'd say it's pretty nailed on to go through Epping itself and from their the route is announced through Epping Forest before entering London down the long stretch of the Epping New Road and passing through the boroughs of Waltham Forest, Newham, Tower Hamlets and Westminster, taking in the Olympic Park along the way before braving the Monday rush hour for the finale on the Mall. Can't wait.

Full details of the route can be found on the Grand Depart Yorkshire website.