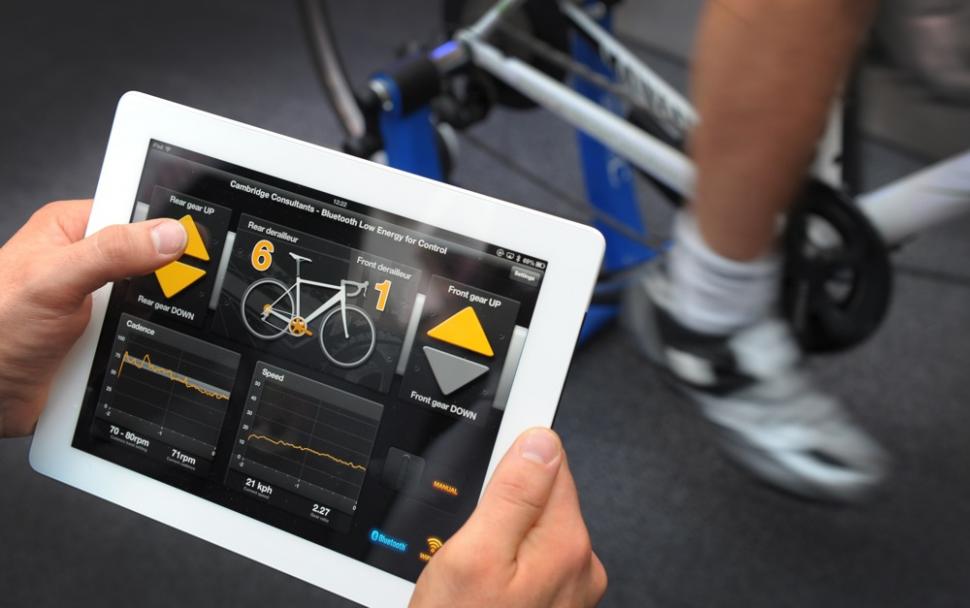 Product development company Cambridge Consultants have made what they claim to be the world’s first wireless automatic gear-changing bicycle. It is controlled by smartphone technology.

Cambridge Consultants took a standard bike equipped with an electronic gear system - they've used Shimano Ultegra Di2 - and they wirelessly linked the gears to both manual controls and a smartphone application mounted on the handlebars, and also took information from sensors measuring the cadence and wheel speed.

This combination of monitoring and control allows the system to make automatic gear changes under the control of a smart algorithm running on the smartphone. When the rider’s cadence slows, the application automatically sends a signal to shift into a lower gear. Bluetooth Smart – a low-energy version of Bluetooth – is used to connect the system wirelessly. It’s clever stuff.

The bike was designed as a training tool to help competitive riders improve performance and technique. It would allow a rider to collect data and receive real-time coaching from the smart technology.

The technology could be used with any bicycle to improve performance and make it more user friendly. It can avoid gear combinations that put high pressure on the chain, for example, and automatically shift down gears when the rider brakes hard.

Cambridge Consultants don’t focus on bikes in particular, they are experts in wireless technology and have used this bicycle design as a means of demonstrating the possibilities.

“This bicycle demonstration shows how a combination of sensing, control, algorithms and connectivity can make a real difference to just one sector of the sports and fitness market,” said Tim Ensor, business developer in the Wireless division at Cambridge Consultants. “The exciting part about smart technology is the unlimited possibilities to enhance a device and its applications.

“This wireless bicycle is a great example of the many ways we can continue to upgrade technology. We could incorporate GPS and map data into the application to make gear changes in anticipation of upcoming hills, for example, or include a heart-rate monitor and other measurement tools to help improve training. But it’s not just about the bike – connected systems have the potential to give all kinds of traditional products a new lease of life.”