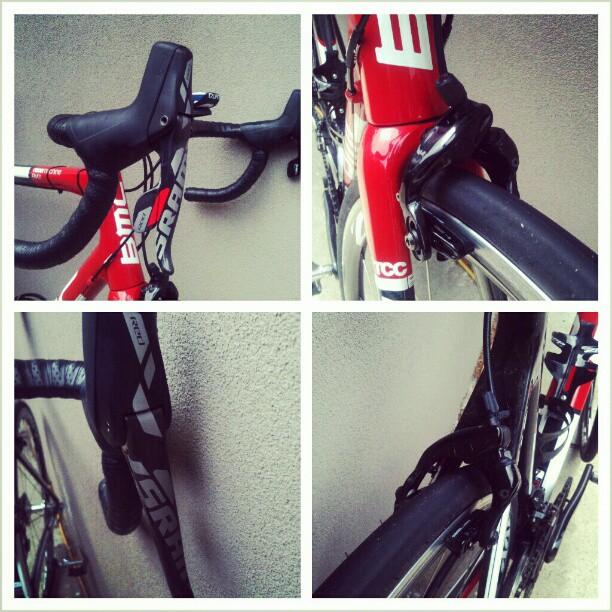 We know SRAM are bringing hydro disc brakes to the market soon; it emerges they’re working on a hydro rim brake too
by David Arthur @davearthur

We know that SRAM are developing a hydraulic disc brake - they told us as much a while back, when prototypes were spotted on the bikes of US professional cyclists out training and cyclocross racing - but we didn’t expect them to be working on a hydraulic rim brake as well. These photos clearly show that they are. We’re taking a guess here at this being a 2014 product, so it’s some way off hitting the shelves of your local bike shop. It’s clear from the photos that the same lever as has been developed to operate the disc brakes is being used for the hydraulic calipers. The narrow upright design of the hoods is necessary to contain the reservoirs of hydraulic brake fluid that makes the system work. So, naturally, once you’ve developed the lever, there’s no reason why you can’t put a hydraulic rim brake on the end as easily as a disc brake.

Hydraulic rim brakes are nothing new in cycling. During the 90s, before disc brakes had become widespread in mountain biking, German company Magura enjoyed a good few years of success with their HS33 line of hydraulic rim brakes. As disc brakes got better and cheaper, Magura’s rim brakes fell out of favour. I remember them as being extremely powerful, but lacking modulation. There’s a reason why trials riders, who need on/off braking power, leaned towards them. 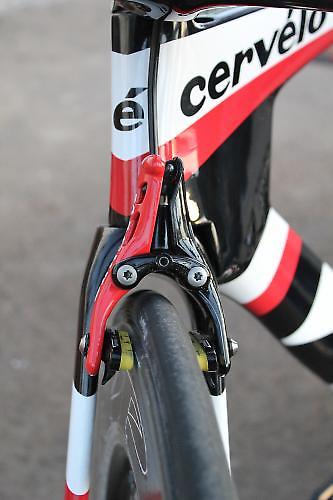 Earlier this year, Magura resurrected the technology (not that it ever went away) in a collaboration with Cervelo, The RT8 TT hydraulic rim brake was designed to work with Cervelo’s P5. One of the bonuses of hydraulic brakes over mechanical is that the hose can be contorted through and around frames that make traditional cable routing very tricky. A hydraulic hose doesn’t mind what journey it takes, it’ll still work just as well. You can’t do the same with a cable; it prefers a smooth kink-free path to the brake.

I half expected Magura’s brake to become The Next Big Thing. You get the low maintenance and incredible stopping power of a hydraulic brake system, and it’s retro-fittable to any bike. That, I assume, is the reason SRAM are clearly working on such a system. There’s demand for disc brakes from cyclists, but not everyone wants them. You need a new frame and fork with disc mounts, new hubs and wheels, so it’s a lot of expense. So maybe SRAM are thinking that people who don't want disc brakes might be tempted with hydraulic rim brakes that will fit to their current bike.

Thanks to Cycling Tips for letting us share the photo with you.