Rob English is a British frame builder currently based in Eugene, Oregon, where he built this stunning time trial bike. We’re used to see some extremely aerodynamic road bikes from the big brands, but it's nice to see such an innovative design from a small bespoke frame builder.

You might remember Rob's svelte carbon and steel 4.9kg (10.8lb) super bike from the North American Handmade Bicycle Show (NAHBS) earlier this year. Dave’s Naked TT is his latest build. It’s actually based on a steel time trial bike that Rob first designed and built a few years ago, but no one has ever stepped up and asked Rob to build them one. Dave is a rider local to Rob who has the necessary flexibility to adopt the low position an extreme time trial bike like this demands. 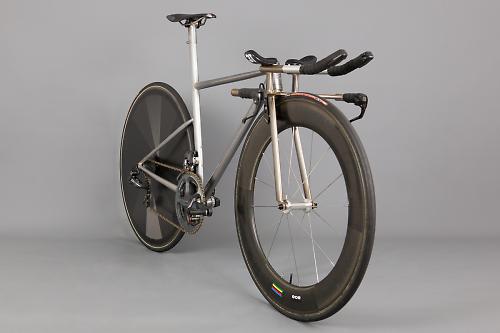 The defining feature is the integrated fork/bar/aerobar which places the controls very low, just millimetres above the front wheel. There's no stem. The top of the forks are fillet brazed directly to the handlebars with the attack bars and brake levers attached to the ends. Short vertical struts support the arm rests, leaving the top of the head tube oddly free of protusions. This build is completed with a Shimano Di2 groupset, powered by a custom battery concealed inside the seat tube. A micro USB port in the seatmast cap makes for easy charging. All wires and brake cables are internally routed. A TRP V-brake is fitted to the back of the forks, while a Tri-rig Omega brake is mounted to the underside of the chainstays. That keeps them out of the wind to reduce drag. The frame has been specially painted by Colourworks, a local frame sprayer. They carefully masked the frame and sandblasted the logos. Best of all, the raw finish shows off the fillet brazing, which is really rather tidy. A super steep 76° seat angle forces the rider forwards and gives a very flat back aero posture. Despite being made from steel, a material considered by many to be too heavy for modern performance bikes, this example weighs just 18lb (8.16kg), It looks fast, doesn’t it? And it’s proven to be fast too. Rob raced his own to victory in the Oregon State TT champs back in 2009. Let’s hope Dave can do it justice.

Check out Rob's work at www.englishcycles.com