1,000-kilometre Connect London network linking all capital's boroughs by 2020 would cost £10 million a year...
by Simon_MacMichael

Sustrans is calling on Mayor of London Boris Johnson to give the city what it describes as “the world’s biggest cycle network” by 2020 as it launches a new campaign, Connect London.

Earlier this month, Mr Johnson revealed that close to £1 billion had been allocated to cycling over the next decade under the new business plan drawn up for Transport for London (TfL).

Sustrans says that its Connect London initiative, which envisages the development of a network of 1,000km of safe, quiet routes that would connect every borough in the city, would cost a fraction of that at £10 million a year.

The sustainable transport charity believes that putting such a network in place would help create significant growth in the number of cyclists by providing people with the confidence to switch to two wheels.

Maps at the end of this article show the network at Greater London level as well as a closer look at routes that would be developed in the London Borough of Lambeth.

The artist's impression in the main picture above shows how Bow Flyover could look if Sustrans' plans were adopted. Here's how it looks at the moment. The call to action comes ahead of Mr Johnson publishing his '2020 Vision' for cycling in London.

Sustrans London Director German Dector-Vega commented: “The world’s biggest cycling network will put London on the map as a global leader in cycling and allow millions more journeys to be made by bike each day.

“Cycling in London is booming but evidence shows that to help more people to feel safe on two wheels, we need to provide more continuous, safe routes.

“The improved network will tackle dangerous junctions and impassable rivers and railways to make cycling accessible for everyone in London. Connecting every borough in London it will see communities flourish and local high streets boom.

“The economic, environmental and health benefits of cycling are undeniable. By investing the world’s largest cycling network, London would not only be the greatest cycling city but also a more healthy, productive and cleaner city too.”

More information on the Connect London initiative can be found here, where you can also sign up to pledge support to the campaign. 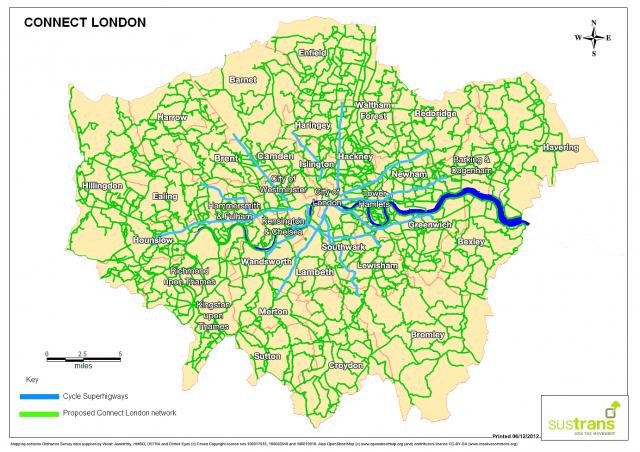