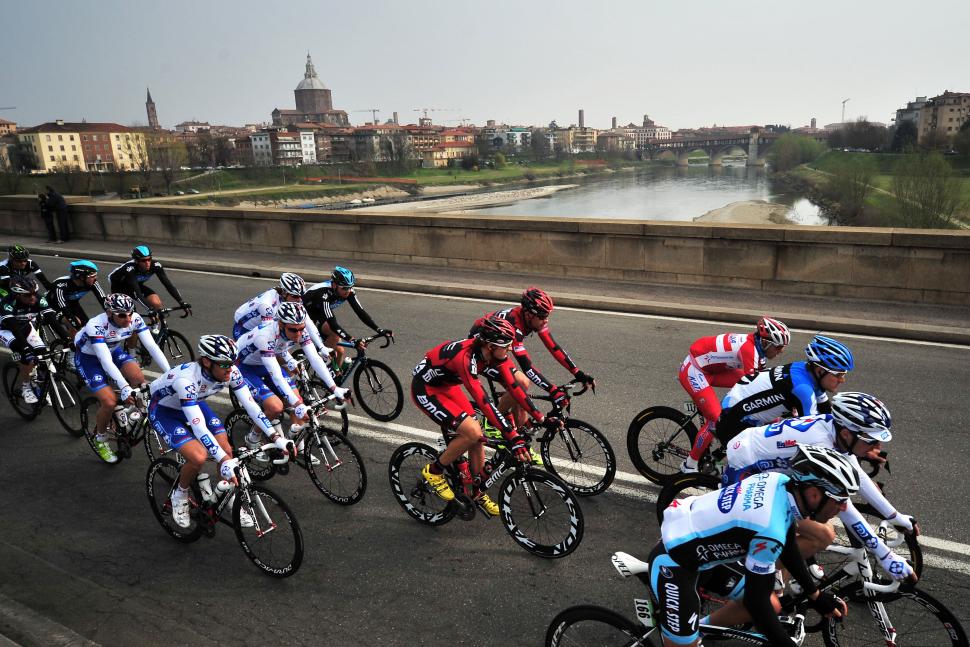 The men behind the proposed World Series Cycling breakaway league have confirmed that they are talking with the UCI and potential investor and Omega Pharma-Quick Step owner Zdenek Bakala about a new season-long competition that would comprise ten four-day ‘Grand Prix’ events around the world. Eight teams are signed up to the proposals, but Team Sky is not among them. In a statement, the UCI has reiterated its previous confirmation that it has been in discussions with Bakala and other stakeholders but says nothing has been decided yet and that it will retain full control of the calendar.

The eight founding teams are Garmin-Sharp, Liquigas-Cannondale, Movistar, Omega Pharma-Quick Step, RadioShack-Nissan, Saxo-Tinkoff, Vacansoleil-DCM, as well as the former Rabobank, although the latter’s ongoing inclusion may depend on whether it is able to secure a replacement sponsor.

While others, such as Team Sky, not to mention the likes of Katusha, BMC and GreenEdge, may be missing - and noticeably there is no French presence – it is envisaged that ultimately 14 teams would be competing, some potentially being invited by wild card.

Plans for what was widely described as a breakaway league first became known last year after merchant bank NM Rothschild and Sons made presentations to potential investors in the project on behalf of promoters Gifted Group.

Yesterday, Jonathan Price from Gifted Group, whose background is in TV rights, and his business partner Thomas Kurth, former general manager of the G14 group of leading European football clubs, outlined their plans to journalists and confirmed that they were speaking to the UCI and Bakala and that discussions were under way with organisers of major races.

According to Belgian newspaper Het Nieuwsblad, the season would revolve around 19 races – the 10 Grand Prix, six one day Classics being the five Monuments and the Amstel Gold Race, and the three Grand Tours.

Points accumulated throughout the season would result in one rider and one team being crowned ‘world champions’ – similar to Formula 1 – helping make cycling more understandable and of course, more marketable, particularly at global level.

The aim is to have 14 teams participating with a roster of 20 riders each. Potentially, some of those teams could be invited via wild cards. It’s not clear how those 14 teams would translate to the Grand Tours or Classics, which typically have 20 or more teams competing.

Each of the Grand Prix races would follow a four-day format comprising a flat stage, a mountain stage, an intermediate stage and a time trial – individual in five of the Grand Prix, team in the other five.

Price explained that people would therefore be able to see the best in the business pit themselves against each other – “Gilbert against Boonen, Cavendish against Greipel, Andy Schleck and Contador against Wiggins.”

Anti-doping would be carried out within the scope of the World Anti-Doping Code, and run by the UCI but with a proposed budget of €4 million far surpassing the existing money it has available for those efforts.

Price said that cycling needed more sponsors of the statute of Coca-Cola and Red Bull, and claimed that a global sponsor and broadcaster had already been lined up for the project, which is aimed at packaging cycling in a format that would appeal to fans and sponsors alike. His and Kurth’s experience suggest that’s more than wishful thinking.

He added that he and Kurth were also working on a similar project for women’s cycling.

Over the summer, the UCI disclosed that it was talking to some of the parties involved in the proposals for the new competition, and last month confirmed that it had been speaking with Bakala and his business partner, Bessel Kok, over plans for what was described as a ‘Champions League’ of cycling. At the time, Bakala stated that his discussions with the UCI had nothing to do with World Series Cycling.

In October, it was reported that the UCI had been offered a stake in World Series Cycling, so this latest news that the governing body is now involved in discussions on developing the format suggests that there is a real prospect of it becoming a reality – and, of course, that it should no longer be considered a breakaway.

In s statement issued in reaction to today's news, the UCI said:

The International Cycling Union (UCI) confirms that it has been in discussions with Omega Pharma-QuickStep owner Zdenek Bakala and his business partner Bessel Kok since late 2011 about the possible development of the professional road cycling calendar.

These discussions have included their potential financial investment in a new joint venture company with the UCI and other cycling stakeholders that would promote and organise elements of this new calendar.  The UCI has signed a Memorandum of Understanding with them as the initial investors in the joint venture and will now enter into extensive dialogue with the teams and race organisers before any final agreement is concluded.

The possible development of the professional road cycling calendar will be subject to comments from the wide-ranging consultation “A bright future for cycling” that will involve all the stakeholders in the sport and which will take place in the first quarter of 2013. This consultation will have a considerable bearing on this proposed joint venture and the future road cycling calendar.

No agreement has been reached on the reforms that will take place to the calendar and as such any media reports about the future of the calendar are pure speculation at this stage. However, the UCI will retain full control over the calendar, including sporting and technical elements. The UCI and the investors are also committed to ensuring that the final structure of the joint venture will avoid conflicts of interest.