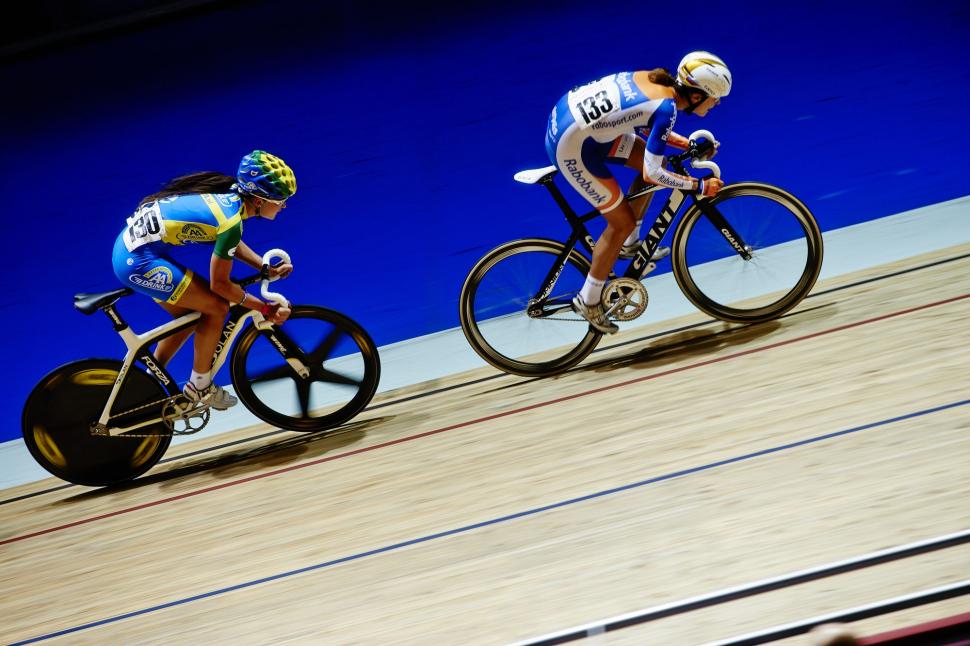 Olympic road race winner took gold again to prove she's the female force to be reckoned with...
by Sarah Barth

Marianne Vos swept her way to victory in the Elite Women's Omnium last night, fought to the end by Lizzie Armitstead.

The rivals, seen in action at the Olympic Women's Road Race, where they took the same podium positions, they went head to head again at the Revolution Series at the National Cycling Centre in Manchester.

The highlights of the event will be broadcast on Wednesday, 5th December at 8pm on ITV4, with the chance to catch up in ITV Player afterwards. Ben Swift of Team Sky takes the role of guest pundit for Round 2, with Sian Welby presenting the show.

Vos (riding for Rabobank) and Armitstead (AA Drink - Leontien.nl) went up against each other in the Elimination Race, and Vos held off Armitstead by just two or three bike lengths.

The Scratch Race - the seventh event on the evening's programme but second in the Women's Omnium - was won by Katie Colclough of Team Specialized-Lululemon with Vos second and Emily Kay (Scott Contessa-Epic) third.

Britain and the Netherlands were pitted against each other in the Women's Team Pursuit - and Britain came out on top in a time of 2:28.216.

In the Points Race - the concluding event of the Elite Women's Omnium - there was more raw talent from Vos. Although her compatriot Ellen van Dyck took the victory, Vos's fourth place confirmed her Omnium crown.

Vos tweeted afterwards: "Had a great evening here in Manchester at Revolution; what an atmosphere! Few days of preparations payed off:-)"

Armitstead tweeted: "Congrats to Vos on her usual! ... Good night by @revolutionuk organisers, thank you for showcasing the women!"

Meanwhile, in the men's camp the Rapha Condor Sharp team kept firm control of the Elite Championship with Ed Clancy taking the Flying Lap. Rapha have amassed 125 points after Round 2, 25 ahead of their nearest challengers, German outfit Rudy Project RT.

The Madison Time Trial was won by IG Sigma Sport with WD40 second, and Team Sky third. Team Sky then went two places better in the Points Race as Luke Rowe won it in 11:35.164, claiming nine points in the elite championship.

Sporting his 'Movember' moustache, Team Sky's Rowe sprinted around the final bend in the Elimination Race, and pipped Russell Downing with an incredibly narrow victory.

Alex Dowsett, the British time trial champion who is bound for Movistar Team next season, marked his final competitive outing for Team Sky with a victory in the Scratch Race - the last Elite Championship event of the evening.

Rapha Condor Sharp may lead the Elite Championship after Round 2, but it was an unsurpassable Dutchwoman who stole the show - the ever-dominant Vos winning the Omnium and proving her world-class status yet again.

More information about the Revolution Series can be found here.