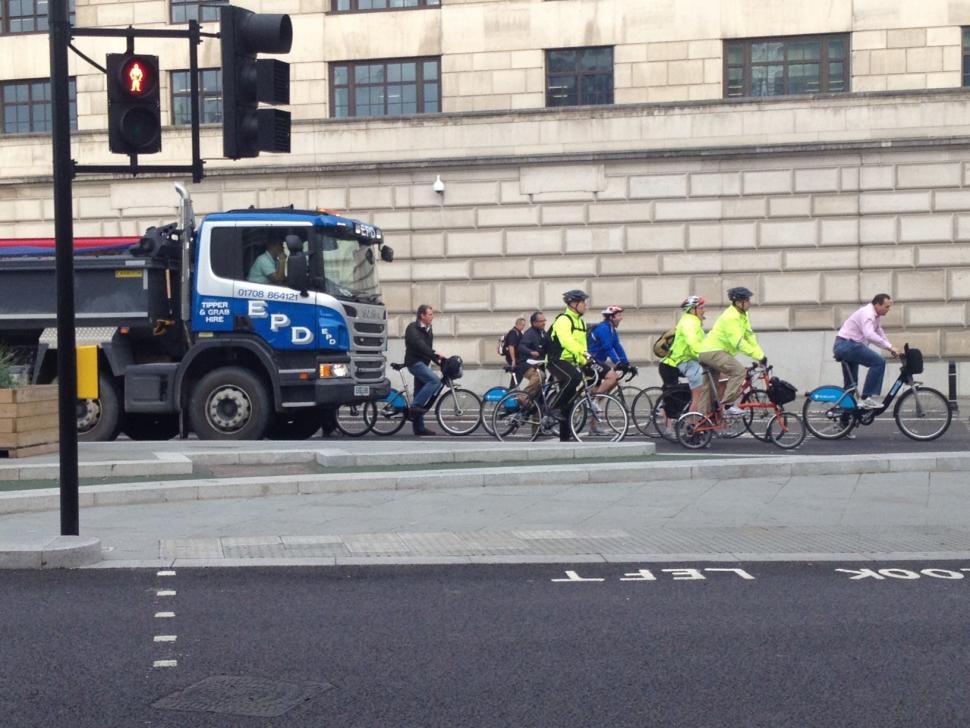 A Transport for London audit into the safety of the Blackfriars Bridge redesign has shown that in spite of a sustained protest by cycle campaigners in the city, the new road layout is dangerous for cyclists and pedestrians.

Despite spending over £2 million making the junction at the north end of the bridge flow differently, TfL's independent auditors have said what campaigners said all along - that it must now be adjusted to reduce the risk for people on foot and two wheels.

Danny Williams, from Cyclists In The City, a campaign blog set up in response to the Blackfriars plans, told Road.cc: "More than a third of the traffic at rush hour is people on bikes.

"Thousands of people turned out to protest and tell TfL that its design would make the junction more dangerous to cycle through and harder to cross the road. Even Boris Johnson admitted to the London Assembly that more work needs to be done to make this junction safe for people. But TfL wouldn't listen.

"They also are also saying TfL must reinstate the pedestrian crossing that was removed over the winter so people can cross in safety instead of jogging across two lanes around a blind corner.

"These are exactly the same points that concerned people before the new scheme went in earlier this year.

"TfL needs to review this junction from scratch and get things right this time for the vast majority of people who need to cross this junction on foot and on bikes."

"he Audit Team are concerned that the mandatory cycle lanes guide cyclists to the left of the carriageway without any clear route towards Queen Victoria Street.

This results in users performing various manoeuvres including crossing three lanes of traffic within a very short section in which other traffic is often changing lanes, increasing the risk of side-swipe type collisions between cyclists and other traffic.

Cyclists performing this manoeuvre also ignored the stop lines and crossing facilities in order to ‘beat traffic’. The potential for conflict between cyclists and other traffic is perceived to be significant.

These findings are similar to those of the London Cycling Campaign, who produced this graphic: It's not clear why TfL has done such a bad job on the Blackfriars redesign - just up the road Crossrail have done the right thing by cyclists in Farringdon by creating a direct cycle path that allows riders to avoid the main traffic diversions.

The audit concludes that at Blackfriars, Transport for London must (among other things):

a) Provide additional facilities to enable cyclists to access Queen Victoria Street safely
b) Provide additional facilities to enable cyclists to access Victoria Embankment safely.
c) Ensure that provision of pedestrian facilities encourages users to safely cross [New Bridge Street, where the pedestrian crossing has been removed].
d)  Clarify the layout at the entry to Queen Victoria Street (where the road is so narrow that cars often enter on the wrong side of the street or try to overtake cyclists, realise they can't and then swerve either into pedestrians or into cyclists).

And as Cyclists In The City point out: "Each of these points was raised by the London Cycling Campaign, by bloggers and by the thousands of people who turned up to protest."

1
After child skids into wall on her scooter, are Bath Two Tunnels cyclists and other users of greenway being deliberately targeted with oil?
2
Canyon unveils 6.2kg Ultimate CFR road bike
3
Five cool things coming soon from Mavic, Suunto, Kask, Topeak and Maxxis
4
Richmond Park reopens to rat-running drivers after almost five months of car-free roads
5
Near Miss of the Day 450: Crap driving, embarrassed accelerating away
6
Thief who targeted high value bikes banned from town centre
7
Canadian woman who boasted of drunk driving before killing cyclist is again jailed for drunk driving
8
Near Miss of the Day 451: Driver flirts with head-on collision to get to red light slightly sooner