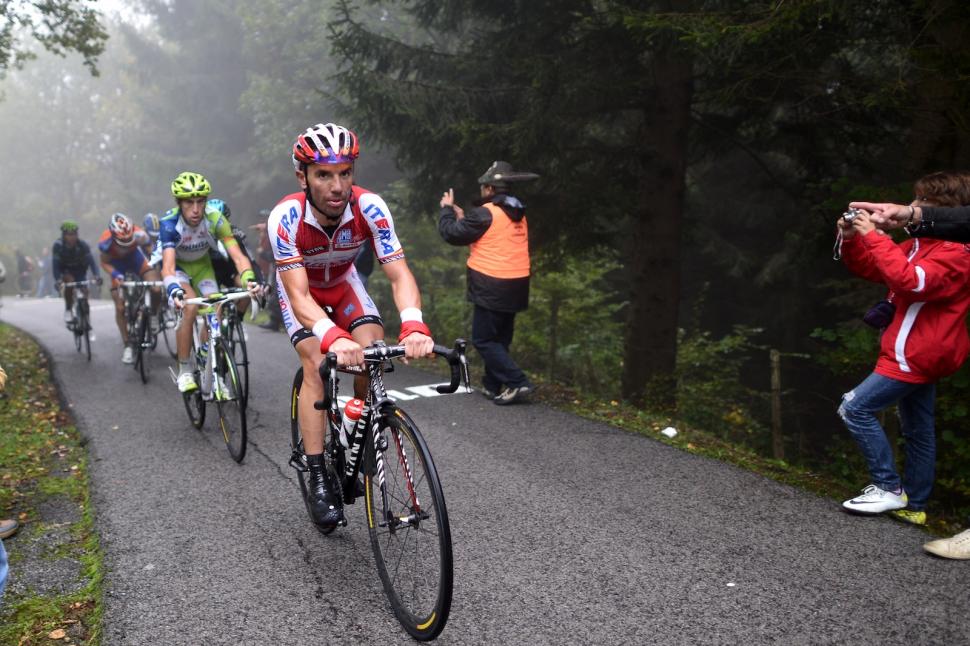 Il Lombardia: Rodriguez attacks in the rain to win the year's final Monument

Joaquin Rodriguez of Katusha has become the first Spaniard to win the Giro di Lombardia and in so doing overhauls Bradley Wiggins of Team Sky to end the 2012 season on top of the UCI World Rankings. As the rain hammered down at the finish line in Lecco, a thunderstorm playing havoc with TV pictures, Rodriguez who had attacked on the day's final climb of Villa Vergano, did enough to hold off a chasing group led by Samuel Sanchez of Euskaltel-Euskadi and Team Sky's Rigoberto Uran by 9 seconds.

While the climb of the Muro di Sormano, crested around 80 kilometres out and returning to the race after an absence of half a century, had been the most eagerly anticipated feature of the today's 251-kilometre race from Bergamo, it was the descent from that summit that provided the drama with one of the race favourites, newly crowned world champion Philippe Gilbert, crashing out.

The 2-kilometre ascent, which has an average gradient of 17 per cent with a maximum of 27 per cent and previously featured in the race for three consecutive editions beginning in 1960, proved to be the scene of suffering rather than attacking, its effect being to make a big selection in the field with a group of around 30 or so riders heading towards the day's other big showpiece climb to the sanctuary of the Madonna del Ghisallo.

Once more, the descent from that climb proved problematic for some, with Vincenzo Nibali, riding his last race for Liquigas-Cannondale before moving to Astana, going down on a corner, as did one of the Kazakh team’s current riders, Paolo Tiralongo.

Ahead, Kevin De Weert of Omega Pharma-Quick Step, who had attacked on that climb after the last of the day's breakaway riders had been swept up and built a lead of around a minute on the chasing bunch, also crashed on a corner as his rear wheel slid out from under him and was soon swallowed back up by the bunch.

By that stage, it was clear that the Villa Vergano climb, less heralded than the two that preceded it, was likely to be decisive and so it proved as Rodriguez won his second big classic of the year, having claimed victory in the Fleche Wallonne in the spring.

Today's victory, the 33-year-old's first in a Moument, will also go some way towards easing the rider's disappointment in missing out on the overall win in both the Giro d'Italia and Vuelta this year, having spent long spells in the leader's jersey in both those races.