Aerodynamics is one of the hottest buzzwords in cycling at the moment, and nowhere is this more obvious than in the wheel market. There's now a dizzying choice of carbon fibre deep-section wheels, but one of the classics is Mavic's Cosmic line of wheels.

Mavic's long-running range of Cosmic wheels have always been a popular choice with racers and the Cosmic Carbon SLR model that we have just received for testing is the company's most affordable deep-section clincher wheelset (their more expensive carbon deep-section wheels use tubular rims). They nicely balance weight, aero performance and affordability.

The Cosmic Carbon SLRs get the same carbon fibre spokes as the more expensive wheels in the range but by using an aluminium hub and aluminium clincher rim with a carbon fairing, Mavic can keep the price down. The carbon element of the rim isn't structural (unlike Mavic's more expensive offerings); instead a traditional box-section rim concealed within gives the structural integrity. 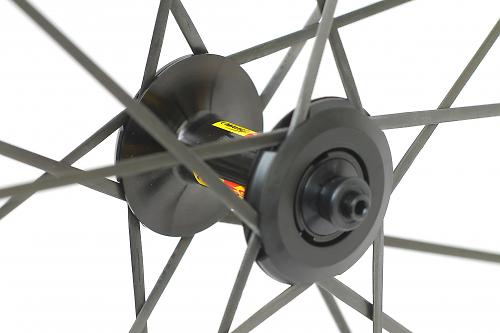 Bladed carbon fibre spokes run continuously from rim to rim and pass over the hub with a special fitting holding them in place. Mavic call this 'R2R'. An aluminium anchor holds the spoke securely in place on the hub, but you can't see this as it's concealed by the hub flanges. This approach is designed to produce a stronger and stiffer wheelset. The spokes are replaceable should one become damaged. 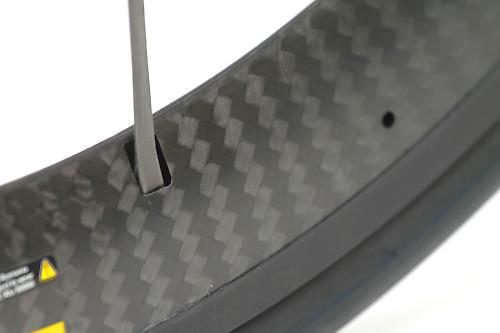 Inside the 52mm 12k carbon weave fairing is an aluminium rim that uses ISM (Inter Spoke Milling) to reduce unnecessary material on the surface of the rim between the spokes. It's the same technology Mavic use on a number of their wheels (take a look at a Ksyrium to see it better).

The braking surface is treated with Mavic's exclusive Exalith 2 technology which is claimed to decrease braking distances by 18% in wet conditions. The rim requires specific brake pads (supplied) to work in conjunction with the file-like machined texture of the rim.

Mavic's new approach to wheel design in the last couple of years has seen them approach the wheel and tyre combination as a 'system', a sign that integration is making its way into this market too. The wheels came to us with a pair of GripLink / PowerLink 23mm tyres already fitted in place. 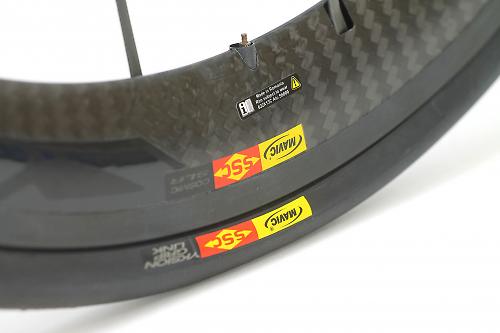 These are front and rear specific tyres. The GripLink front tyre uses a dual compound construction with extra Silica on the shoulders to boost grip through corners. For the PowerLink rear tyre Mavic use a harder 70a compound along the central tread section to reduce the wear rate, while keeping rolling resistance low. Like the front tyre, a dual compound tread places softer rubber on the shoulders. Both tyres feature a nylon anti-puncture breaker between the carcass and tread.

At the business end of the rear hub, Mavic's freehub features FTS-L (Force Transfer System Light), which means the main components have been reinforced with stainless steel inserts. Doing this allows Mavic to fit a lighter aluminium freehub body. 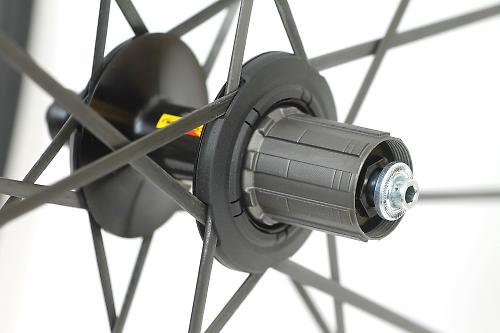 Dura-Ace goes 11-speed for 2013 but there won't be any compatibility problems because Mavic's wheels have been 11-speed compatible since 1998. The freehub body is already wide enough to take the extra sprocket; you just have to leave off the shim that is supplied with Mavic wheels and the 11-speed cassette will slide straight on.

Weight is reasonable at a claimed 1,595g without tyres and 2,165g with tyres fitted.

For £1,699 there is a lot of competition for the SLR's to fend off. There are full-carbon clinchers available at this price as well, but the SLR's put up a good argument for themselves, and appear to be competitive on all fronts. Only testing can reveal how they perform so, as they say, watch this space.

The 2013 Cosmic Carbon SLR's come with everything you need to get up and running. As we said, they come already fitted with tyres, and they're supplied in logo-ed padded wheel bags. Quick release skewers, hub and spoke tools, rim tape, valve extender, sensor magnet and Exalith brake pads are supplied too.