While much of the attention at Eurobike might have been on the latest frame and fork designs, there were a lot of new wheels on display. As everyone knows, wheels are the single best upgrade you can make to any bike and the latest developments in the wheel world are principally focused on aerodyanmics.

Wheels are getting faster it seems, and everyone has their own take on how to go faster. Here's a roundup of the new wheels we saw at the show.

Aerodynamics is the big news among the world's leading wheel manufacturers at the moment, but showing that you don't need to be a huge corporation to innovate, British firm USE have launched their new carbon fibre wheel range. 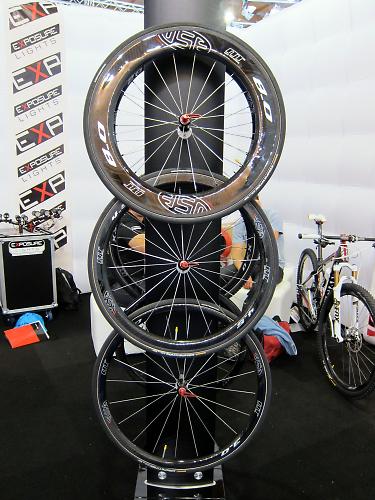 In aerodynamics the desire is to reduce the drag of an object. There are different types of drag and USE's new wheels aim to reduce skin friction (or surface friction) by using a super slippery coating that reduces the friction of air against the surface of the rim. 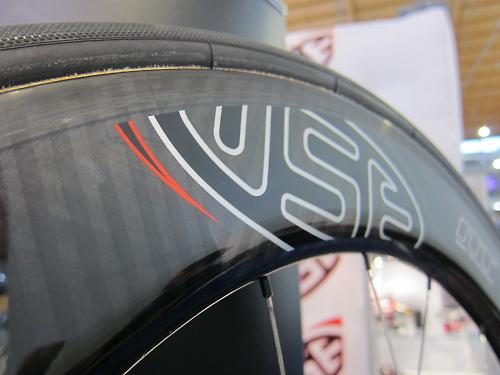 They'll be offering three rim depths (30mm, 45mm and 80mm) in tubular format, and a 45mm clincher option. USE have developed their own hub, a smart CNC-machined design with cartridge bearings. Lacing the hubs to the spokes are Sapim CX Ray bladed spokes. 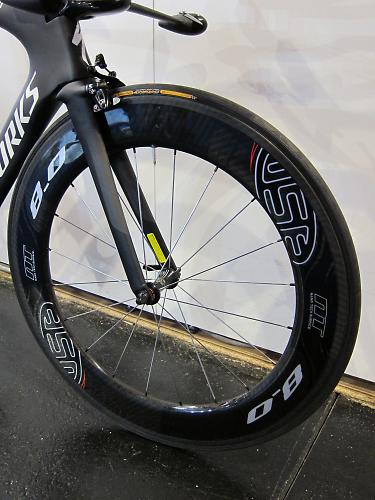 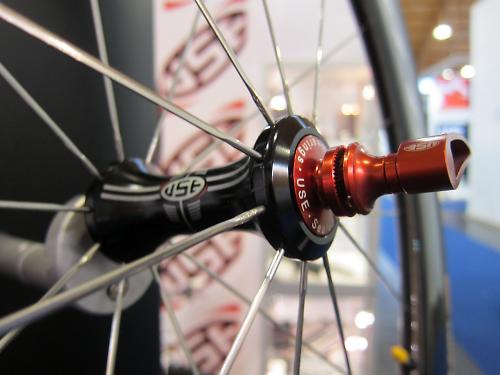 Xentis are expanding their Squad range of road wheels for 2013 with new ‘Silver Line’ carbon models that feature ceramic bearings. 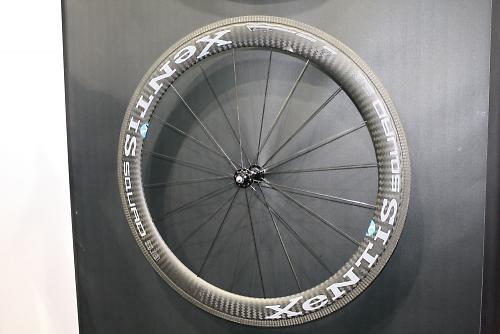 The rim depths are the same as previously – 25mm, 42mm and 58mm – and the wheels come in both clincher and tubular versions. The difference is in the hubs. Each wheelset comes with a Xentis XH001 front hub with two ceramic bearings, a 15mm aluminium axle and 20 spoke holes. 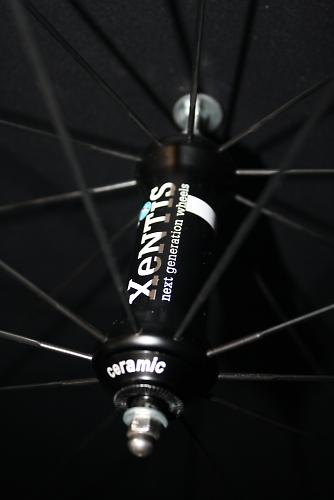 The XH001 rear hub that’s used throughout has four ceramic ball bearings and 24 spoke holes (straight pull on the non-driveside, standard on the driveside). The rear hubs will be available for both Campag and Shimano. 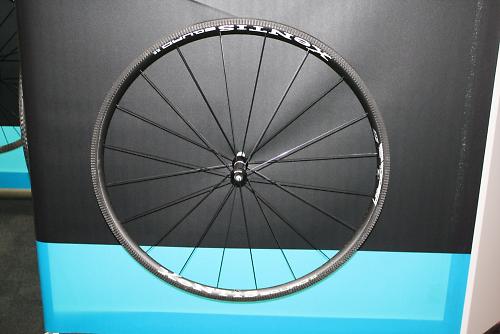 Xentis give the weight of the lightest Squad Silver Line wheels, the 25mm deep tubulars, as just 1,016g. The maximum combined weight of bike and rider is 90kg on for this wheelset, called the 2.5, and 110kg on the others.

Incidentally, Xentis say you can use any pads on these wheels, not just carbon-specific ones, thanks to the finish on the braking surface, and longevity won’t be affected.

Mavic's hot new wheelset is the CXR 80. It is, claims the French company, their most aerodynamic wheelset and achieves this lofty claim with an 80mm rim and novel plastic blades that smooth the transition between the tyre and rim. 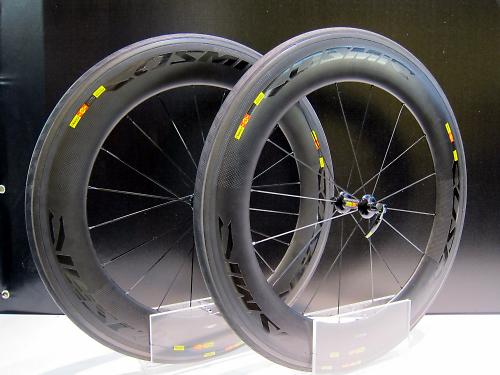 Unfortunately for Mavic, the UCI have waded in with their rule book and banned the controversial blades. It's not yet clear whether this is a permanent band. The wheelset can still be used without the blades, though how this impacts the aerodynamics is anyone's guess. 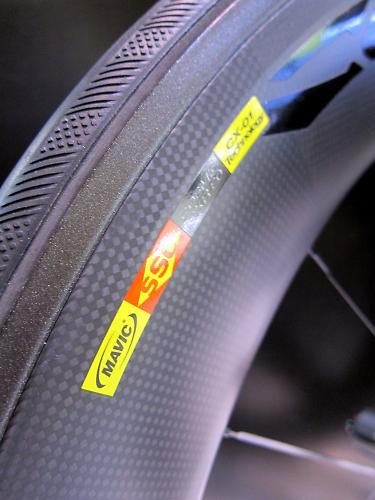 Like many of the latest wheels, a wider profile - 28mm at is widest - is shaped to manage airflow and reduce turbulence as much as possible. The plastic blades, designed to produce a smoother transition between tyre and rim, simply snap into place. With the blade in place, the entire rim and tyre forms a Naca airfoil profile. 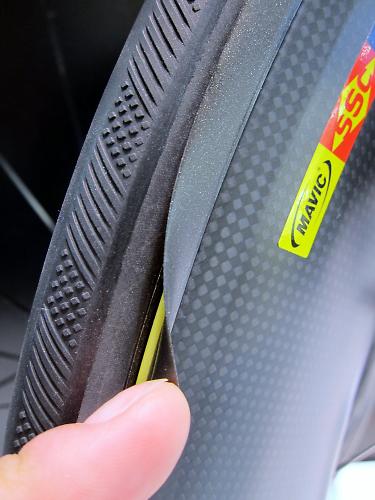 The Yksion CXR tyre has been designed in conjunction with the wheels and strip, making it one of the new breed of integrated wheelsets, where the tyre is a considered part of the overall wheelset design process. We expect to see a lot more wheelsets designed with integration in mind. The wheelset (including tyres) weighs 2.13kg.

Elsewhere in the range, the Ksyrium range gets a new addition in the shape of the SLS, a 1,395g wheelset. A lighter rear hub, lighter spokes and rim makes it the lightest Ksyrium yet offered. 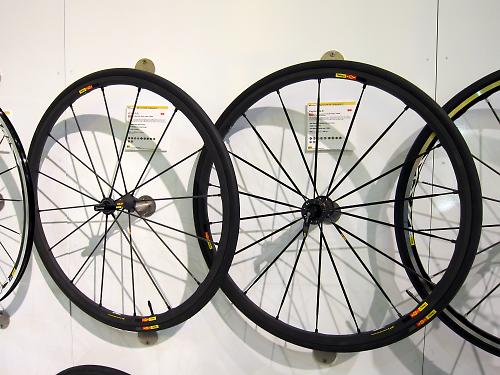 The R-Sys range has been consolidated into one mode, the SLR. It comes with tubular carbon spokes, ISM 3D rim milling, titanium bearings and Exalith brake surface, and an all-up weight of 1,295g. 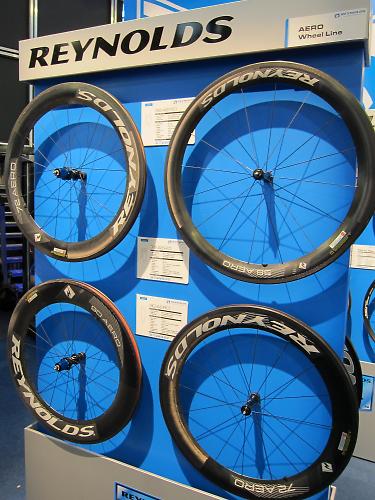 Most importantly, the three new wheels incorporate the Dispersive Effect Termination (DET) technology from the RZR. While most of the industry is leaning towards fatter and rounder rim profiles, a feature of the DET technology is the sharp trailing edge. It's said to help to smooth the airflow to reduce the drag of the wheel. It also improves bike handling, making it more stable and predictable. 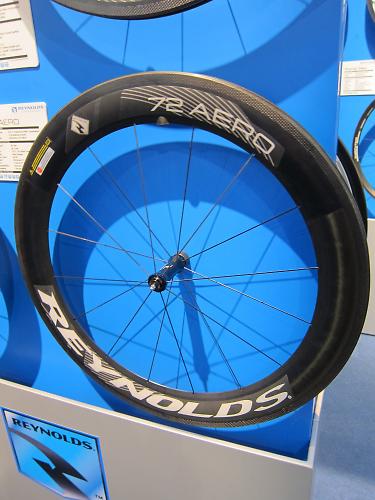 A new braking surface and specific brake pads have been developed as well. Ctg Cryo Blue brake pads and the brake surface laminate reduces the temperature under braking – overheating can be a problem with carbon clinchers, deformation and inner tube blow-outs the undesired results, which Reynolds claim to have eliminated. 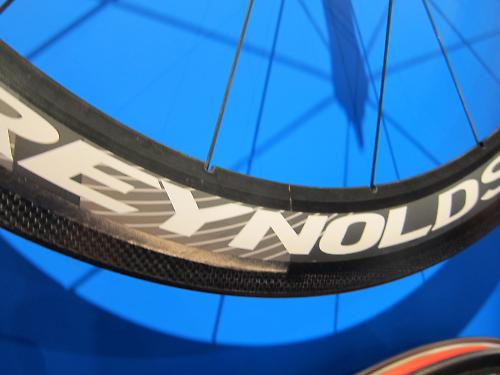 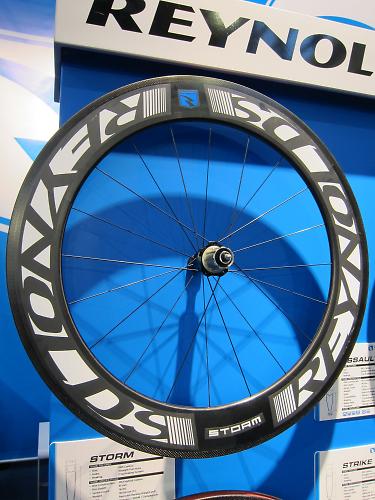 The Storm is a new 81mm carbon wheel that joins the Attack, Assault and Strike range for 2013. 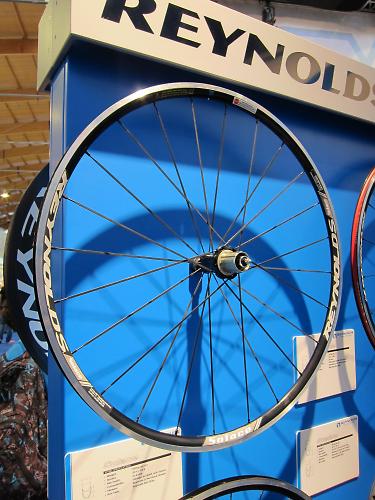 At the other end of the scale, Reynolds are joining the growing group of manufacturers that offer a tubeless road wheelset. Using a NoTube's specification rim, the new aluminium Solace wheelset allows easy tubeless setup. Weight is 1,400g for the set with 20/24 spokes and it's Shimano/SRAM compatible. 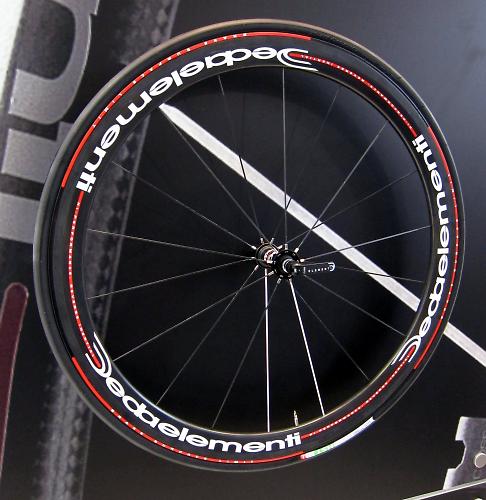 Italian component brand Deda Elementia (best known for their handlebars and stems) have launched into the wheel market with a new range of three models for next year. 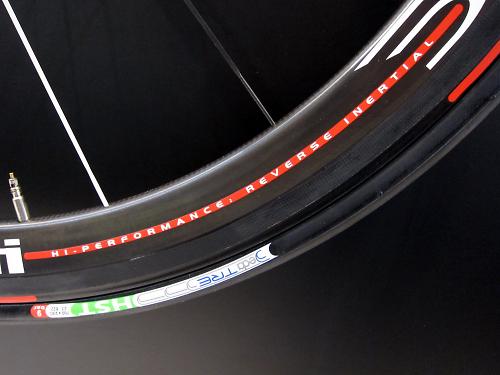 There are two carbon wheelsets with a choice of 30mm or 45mm rim widths and in clincher or tubular. The rims are laced to the aluminium hubs with straight-pull bladed spokes and they're compatible with Shimano, SRAM and Campagnolo 11-speed. 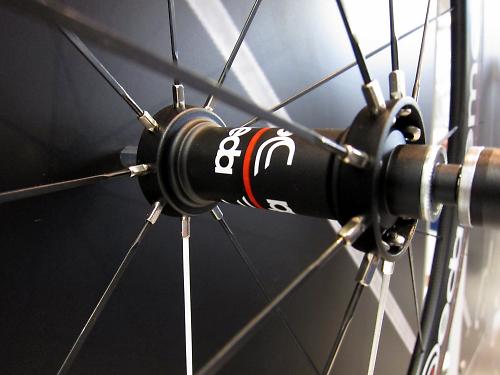 Key to the new wheels is Deda's Reverse Inertia design, which locates the spoke nipples in the hub. They say this leads to a lower rotational inertia with lighter and stronger rims. A heat-resistant polymer resin in the 3K and unidirectional carbon fibre helps withstand heat build-up from braking forces.

Zipp have extended the use of their Firecrest rim profile to their 32mm-deep 202 now. The new shape is available for clincher tyres but not yet for tubulars. Go here for the full story. 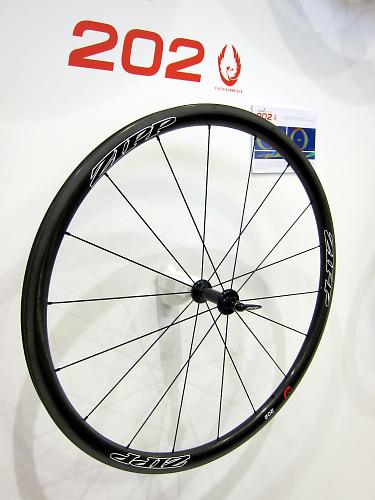 Zipp are also launching the Super-9 Carbon Clincher Disc which they reckon is the fastest wheel ever.

Easton's new  EC70 SL wheelset uses a 42mm clincher aluminium rim with a complete weight of 1,660g. Spokes are straight-pull Sapim double-butted: 18 in the front wheel and 24 at the rear. Hubs are Easton's own R4 design with adjustable sealed cartridge bearings and aluminium axles contributing to the low weight. 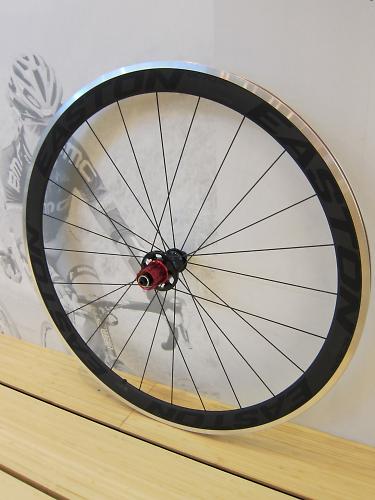 We first told you about 3T’s Mercurio wheels when we went to the launch last summer. Now the Italian brand has announced that it’s teaming up with Denmark’s CeramicSpeed to offer a version with ceramic bearings. You can read the full story about the company's new wheels in Mat's article here. 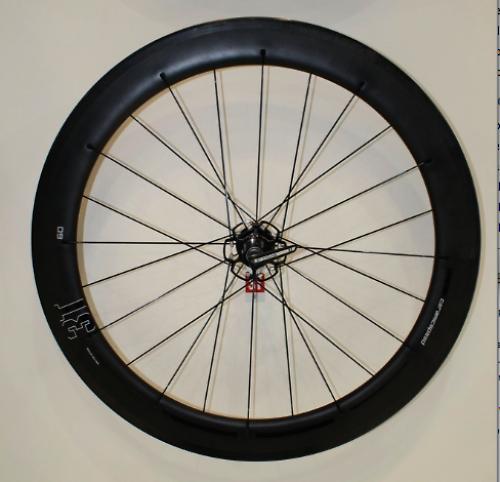 British brand Halo are launching into the aero wheels market with the medium and deep-section Carbaura clincher range. 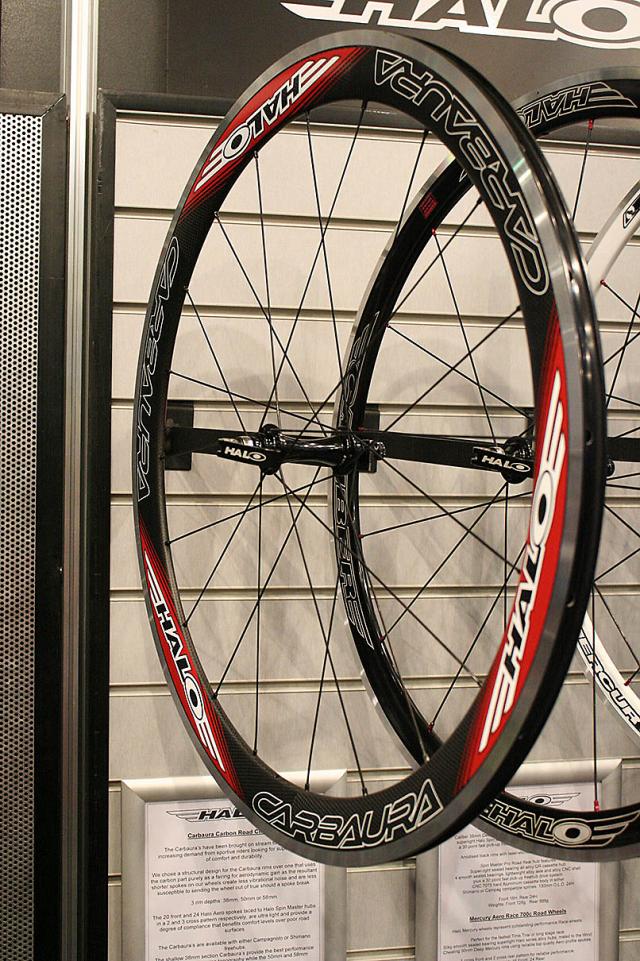 Halo are best known for their bombproof mountain bike wheels but they’ve moved into the road world recently. The Carbaura wheels are structural carbon with an aluminium extrusion.

Halo’s Paul Vincent said, “We chose this in preference to a 100% carbon rim as braking control is far more predictable on long, fast descents.

“We also rejected wheels that use the carbon section only as an aerodynamic fairing as they tend to be noisier, and ‘pretzel’ when a spoke breaks.” 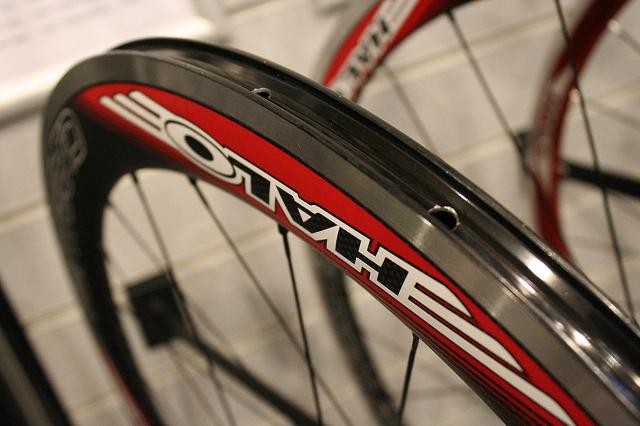 The wheels will be available in three rim depths: 38mm, 50mm and 58mm, all with 20 spokes up front and 24 at the rear. Those spokes are lightweight, aero-section stainless steel and the nipples are external for convenient adjustment.

The production wheels will actually have a different rear hub from the one pictured here, the left-hand flange coming more inboard.

Prices are expected to be in the region of £615 per pair but Ison don’t have a delivery date set yet so keep your eyes on Halo’s website.