It's the most aerodynamic wheel in the world! At least, it is today.....
by dave atkinson

To be accurate it's a wheel system, not just a wheel. The tubular tyre is an integral part of the system and Mavic have considered both together from the beginning of the three-year project that's culminated in the CXR-80's launch. In fact there's three components, not two: a plastic fairing attaches to the rim's outside edge to smooth the transition between the rim and the tyre. The rim is 80mm deep and has a wide bed and a rounded profile, which with the tyre and plastic insert build into a very smooth ovalised profile; see the vid at 1:17 for an indication of the shape the bits knit together into. 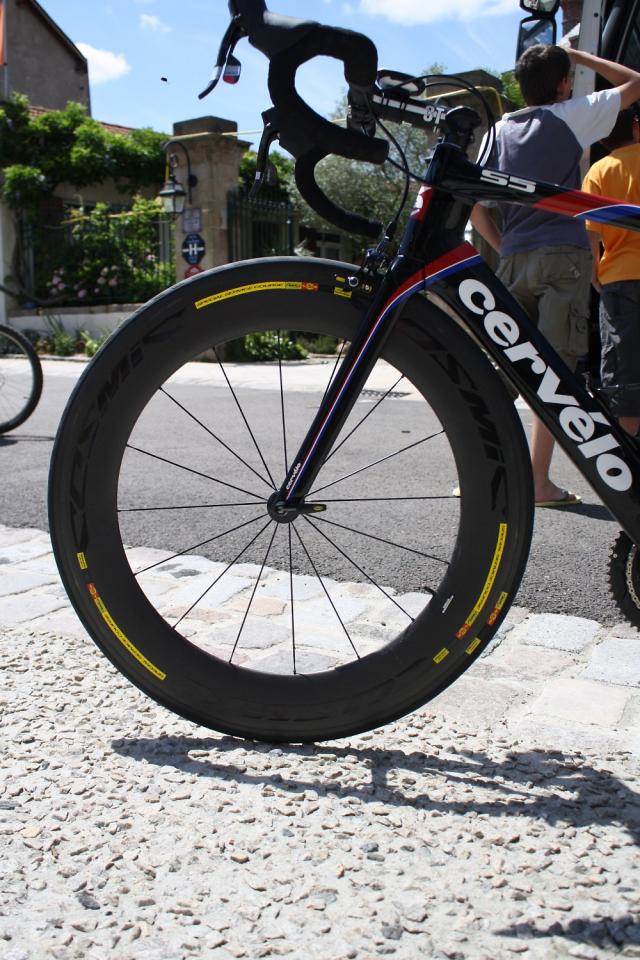 What are the benefits? Well, reduced aerodynamic drag, natch. Specifically Mavic are bigging up the CXR-80's performance in yaw situations, ie where the wind isn't coming directly from the front. That's most of the time when you're out riding. Mavic claim that the airflow over the new wheel system isn't disrupted until it reaches 18 degrees of yaw, which is a higher marker, they say, than any other tyre/wheel combo out there. "We can state today", says the vid, "that the CXR-80 is the most aerodynamic wheel"

These are the wheels that we saw on the Garmin bikes at last year’s Tour de France. Our pictures here are of Tyler Farrar’s Cervélo S5 a couple of days before the 2011 Grand Départ, with the Cosmic CXR 80 sticker blacked out. You can see just how much of the tyre’s sidewall is covered by the CXRR01 plastic strip, and just how much it smooths the transition between the wheel rim and the tyre. 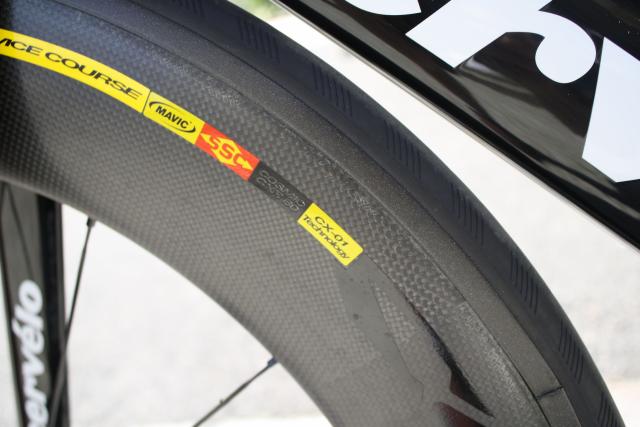 The last we heard, the UCI had told the pro teams to stop using the CXR01 strips, at least for the time being, so we’re not sure how the land lies on that front at the moment. We’ll see if we can get you some news on that.

Ooh! Mavic have got back to us superfast...

"You are right, our CXR01 blade is UCI banned (for now)," says Mavic's Michel Lethenet. "Nevertheless, Garmin-Barracuda and Katusha finished 1st and 2nd at the Giro without using them [while riding the CXR 80 wheels]. Actually, even without them, this wheel is the most aero on the planet; that is the reason why we did not stop the development last year and will deliver them with the wheels and dedicated tubular. In triathlon, this is not an issue. The CX01 technology is valid and fully used for the performance it is providing."