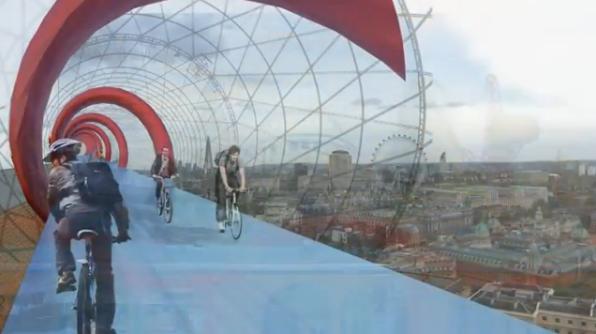 Last month we reported how Boris Johnson had revealed very rudimentary plans for an elevated cycle path over London, and now a firm of architects has produced sketches of how the project, with the working name SkyCycle, might look.

Sam Martin, a landscape architect and director of Exterior Architecture, has apparently been in discussions with the Mayor of London and Network Rail since May about using disused railway lines above ground in a network linking mainline railway stations across the capital.

"TfL estimate the number of journeys made by bike will treble to around 1.5 million by 2020. Where are they meant to go? SkyCycle is the next logical step, because you can’t realistically build more cycle lanes on ground level.

"You have to start knocking down buildings and there will always be the problem of traffic. It will be less safe than it is now and you can’t persuade people to get on bikes as it is even if you keep raising taxes on cars.

"Boris loves the idea and Network Rail are really positive about it. I sincerely believe it could be the next significant piece of London infrastructure and would transform the capital.

"It has been compared to New York’s High Line, which I am familiar with, but the reality is this is a completely different concept."

Mr Martin's plans include a pay-as-you-ride Oyster service, which he proposes costing £1 per journey, with a corporate sponsor like Barclays helping to fund the construction costs.

It is thought the first route could be built on the Olympic regeneration of east London, linking Stratford with the City of London through Liverpool and Fenchurch Street stations but this has yet to be confirmed.