Rotor officially launched the new Rotor Power chainset at Eurobike, after we saw a prototype this time last year.

Measuring power is for professionals and serious amateurs alike and this is Rotor's first offering for those who want to run a complete Rotor system.

Unlike other products which use a single meter, the Rotor Power cranks has two meters incorporating four strain gauges apiece, in each crank arm. This allows more accurate power measuring and means you can do cool stuff like display the power output of the left and right leg individually, in real time. This is a data set that until now only a pedal-based power meter system (like Look's KeO pedal) could offer. As well as that, torque efficiency, which is the measurement of the positive vs negative torque of each leg, can be measured and analysed. The final trick up the sleeve is pedal smoothness – at the moment there isn't a head unit available to display such data out on the road. Rotor also claim the crank is more efficient and doesn't suffer from spiking on rough roads or when sprinting.

Battery life is a claimed 300 hours and the batteries are easily replaceable. The cranks will work with any ANT+ device like a Garmin Edge 800 and the firmware in the cranks can be updated easily with a standard ANT+ dongle.

The complete crankset weighs just 556g, only 30g heavier than the regular 3D+ MAS crank. Rotor's 30mm universal axle allows it to be installed on just about any frame.

No UK pricing yet but we know it will cost €1,690. Availability isn't expected until the end of the year.

Rotor also showed the new Flow crankset, which we first saw at the Tour de France back in July. Rotor engineers collaborated with Robby Ketchell, Director of Sport Science at Garmin Sharp, to develop the cranks. Using CFD (computational fluid dynamics) software to simulate a wind tunnel, they developed a crank arm that is more aerodynamic throughout the full 360 degree rotation. 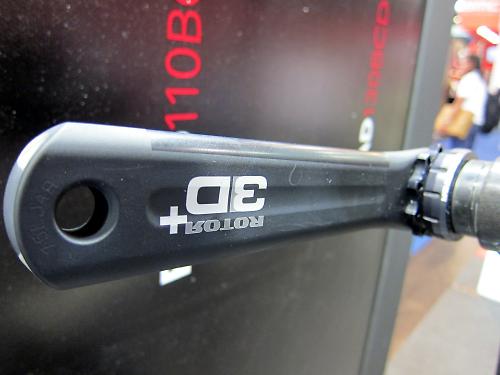 They claim using the Flow can save 26.4 seconds when averaging 200 watts for 180km (the length of the bike leg in an Ironman triathlon). It's also 10% stiffer and lighter than most other aero cranks on the market, they tell us, at 562g without chainrings. 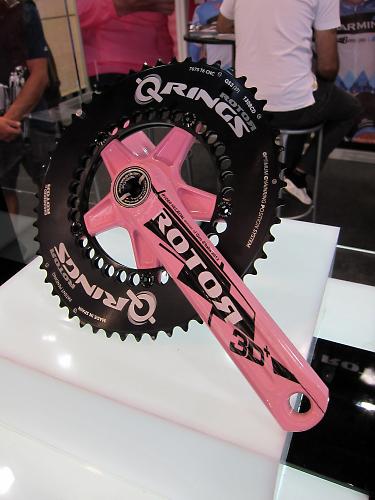 And you know you've made it when you get a specially painted set of cranks to honour your win in a Grand Tour. To mark Ryder Hesjedal's win in the Giro d'Italia earlier this year, Rotor had these fetching pink cranks proudly displayed on their stand. Nice.