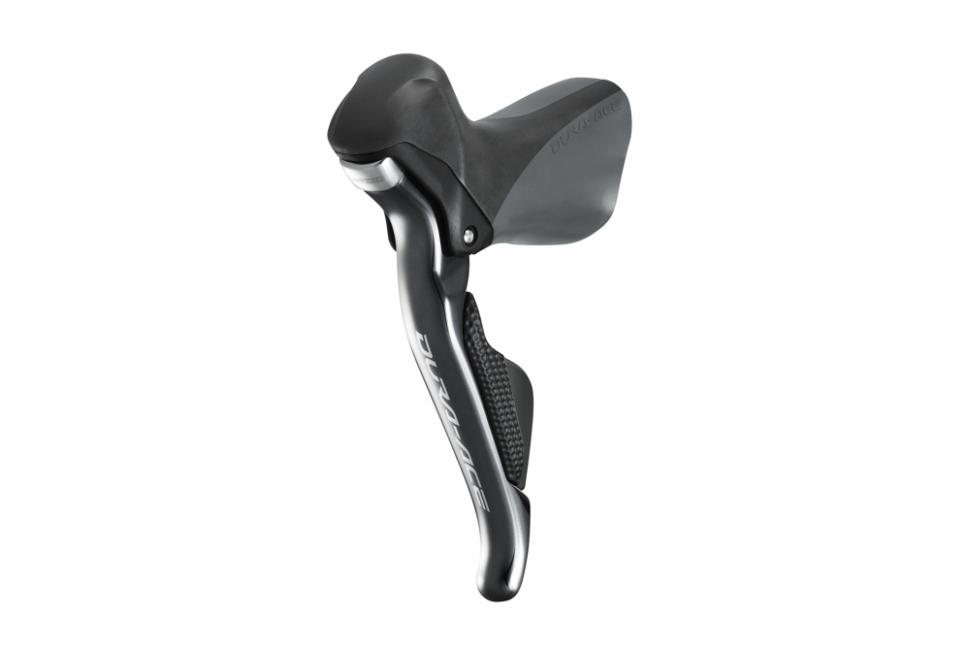 We’ve told you that Shimano have redesigned their top-level Dura-Ace groupset for 2013; the electronic Di2 shifting gets a major overhaul too. The system had to be updated to make it 11-speed and bring it into line with mechanical Dura-Ace, but Shimano have introduced other big changes with the new 9070 Series Di2 too… For a start, Shimano have changed the electronics. The first generation of Dura-Ace Di2 had cables with four inner cores and connectors that were 8.8mm in diameter. But when they introduced Ultegra Di2 for 2012 , they used just two core wires in the cables and smaller (5.1mm) connectors. That meant that manufacturers could use smaller holes in their frames for internal cable routing with less effect on tube strength. It also meant that the Dura-Ace and Ultegra versions of Di2 were not compatible with one another.

Now Shimano have borrowed the Ultegra system’s wiring – E-Tube wiring – for 2013 Dura-Ace Di2, so it’s a rare example of trickle-up technology. That means that all the 9070 Series Dura-Ace satellite shifters and so on will work with the existing Ultegra Di2 system.

The lithium-ion battery will be available in two versions suitable for both external and concealed internal mounting. Shimano are suggesting that manufacturers start to include a battery compartment in the down tube, just up from the bottom bracket, although other locations will work equally well. 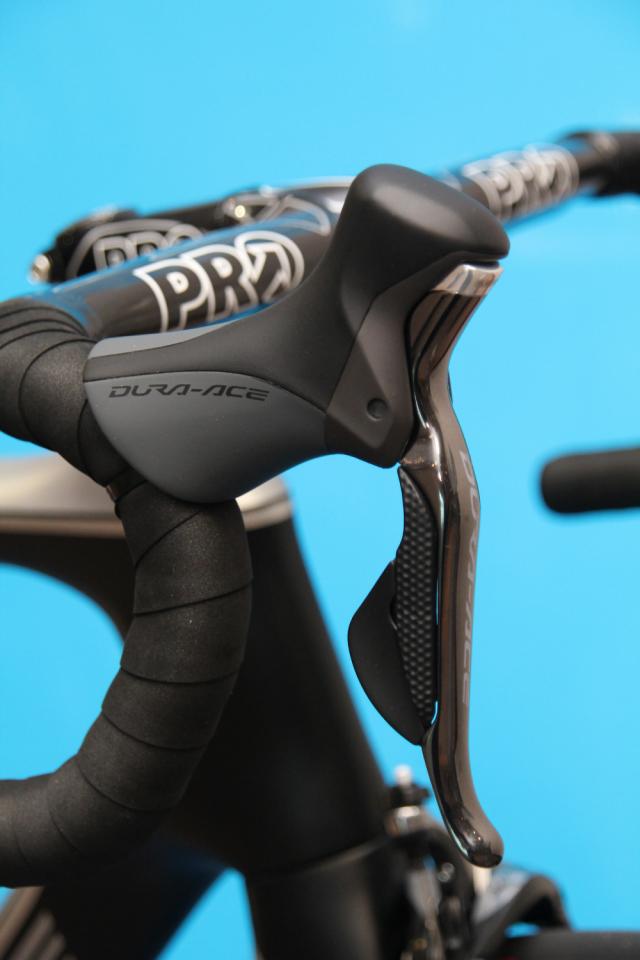 The 9070 levers have been reshaped, as the mechanical Dura-Ace levers have, for better ergonomics and the button operating area for shifting gears has been widened. With the original Dura-Ace Di2 it could be quite difficult to distinguish between the shifters because they’re positioned so closely together, particularly with gloved fingers, so Shimano have addressed this. They’ve also added dual compound hoods for improved grip and feel, as they have with the mechanical version.

The 9070 Series also allows you to program a multi-shift function. Previously, if you wanted to shift two gears you had to press the lever twice – that’s not really a problem but if you wanted to move right across the cassette it could be a bit of a pain. In contrast, with Campag’s EPS electronic shifting you can just push the lever and hold it there to perform multiple shifts. Shimano are introducing a similar feature now and you can personalize it – so you can program the system to move however many gears you like when you press and hold the lever.

If you want aerobar shifters, you’ll get an extra option for 2013. Previously, as well as dual control levers at the ends of the base bar, you could have a shifter for the end of each extension, one linked to the front mech, the other linked to the rear mech. Each had two buttons – one to control upshifts and the other to take care of downshifts.

You can still go for that but there’s now another option if you’re willing to forego front shifting on a flat course. The SW-9071 shifters have a single button each – one hand moves the chain up the cassette, the other moves it down. 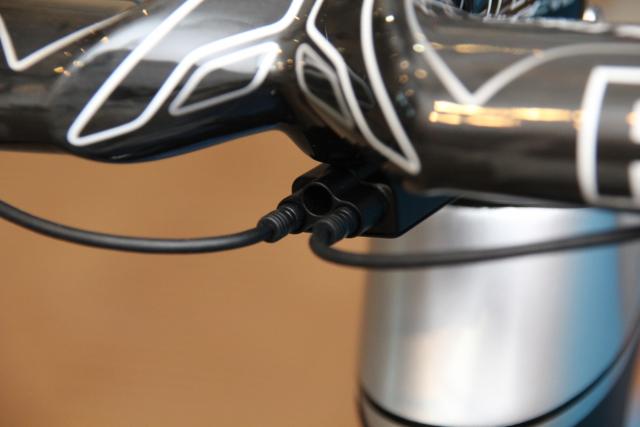 The junction box – which links the handlebar cables to the rest of the system – will still be available with three ports but you’ll be able to get a five port option instead. This will allow you to connect more accessories to the system. There will also be a charging port at the junction box which might make life easier, particularly if the Di2 battery is housed inside your frame. 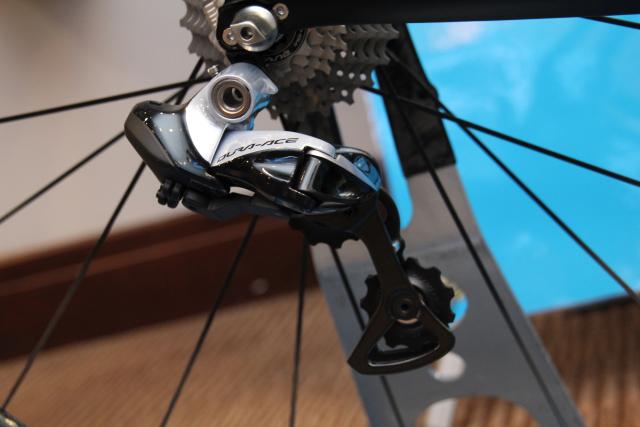 Both derailleurs for the 9070 Series Dura-Ace are smaller and lighter than previously. Some people were put off by the size of the first generation Di2 derailleurs but the new versions are much more inline with mechanical derailleurs – larger, but not on a different scale altogether. The 9070 rear derailleur will be able to handle a 28T cassette. Previously, the largest sprocket you could use was a 27T. 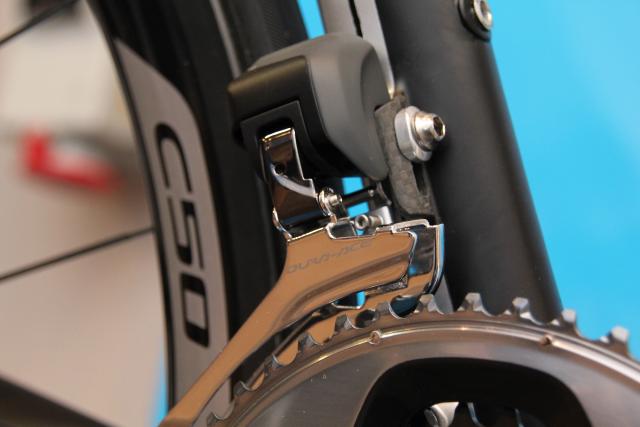 Shimano will also be launching a new R770 FlightDeck wireless computer in the 2013 range that’ll integrate fully with a Di2 system (10 or 11-speed and also with a mechanical Shimano system).

It has a touch screen rather than buttons and several Di2-specific functions. You can adjust the gears via the FlightDeck, for example, program the multi-shift settings, and it’ll run simple system diagnosis. It’ll also display the battery level. The system uses the ANT+ protocol so it’ll work with third party devices that use the same, such as heart rate monitors and power meters.

Shimano say that the system weight for 2013 Shimano Dura-Ace Di2 is 1,957g, excluding wiring, although they've so far been unable to supply us with any individual component weights. That compares to 2,219g for the previous Dura-Ace Di2 and 2,482g for the current Ultegra Di2.

Pricing has yet to be finalised and delivery is expected towards the end of the year.deliveries ramping up from the new year.