Bradley Wiggins won the Tour de France, Chris Froome came second, Cav won on the Champs Élysées and Team Sky racked up a total of six stage wins... Incroyable! And they did it all on Pinarello bikes: Dogma 2s for the road stages and Graals for the time trials.

In case you missed it - or maybe you'd just like to be reminded - here's our look at the bikes that we published back at the start of the race.

This is Cav’s bike (main pic), easily identified by the fact that it foregoes Sky’s usual blue livery in favour of the World Champion’s rainbow stripes that the Manx rider won in Denmark last year.

The frame is a Dogma 2 as opposed to the new Dogma 65.1 that we reported on recently. The 65.1 uses a higher grade of carbon fibre that’s more rigid so Pinarello can use less of it and bring the weight down. Le Mod Wiggins actually raced the final stage on the new Dogma 65.1, yellowed up to match his jersey but he, like the rest of the team, did the other stages on a Dogma 2. They’ll doubtless all be on the 65.1 next year, though, because despite rumours that the team would be switching to Specialized for 2013, they’ve just announced that they’re sticking with Pinarello. 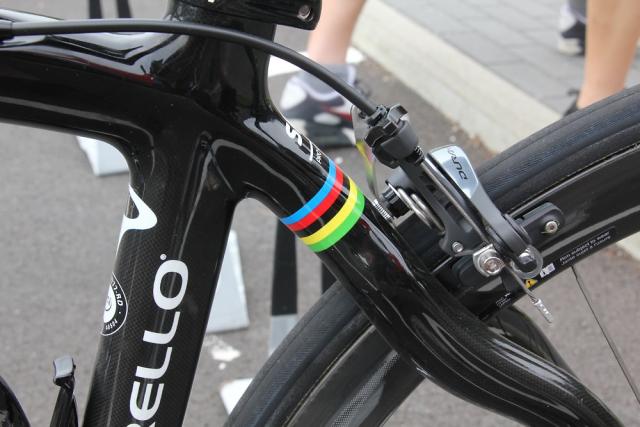 So, back to Cav’s Dogma 2… It’s Pinarello’s top line road machine with a frame made from Toray’s 60HM1K carbon fibren – which means its rigidity has been measured at 60 tons per square millimetre. The Onda fork is made from the same material, coming with a tapered 1 1/8in to 1 1/2in steerer for a little extra stiffness compared to a standard straight steerer.

The most distinctive features are clearly the wavy chainstays, seatstays and fork legs designed to improve the ride damping for increased comfort. Visually, it’s a real love it or hate it design. 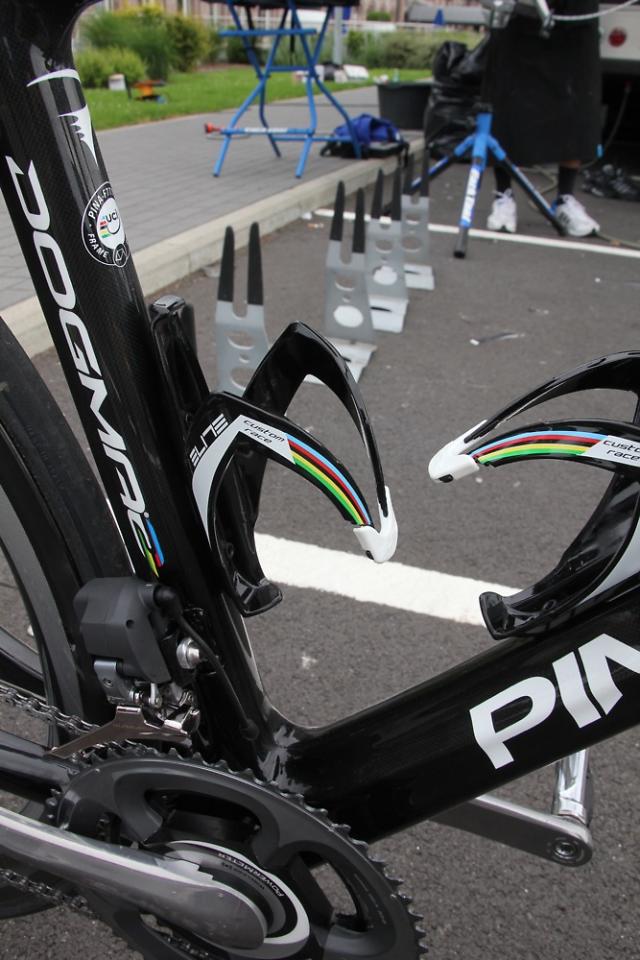 The down tube is asymmetric to take account of the higher forces on the driveside of the frame compared to the non-driveside. The idea of building it asymmetric is to make it behave symmetrically. 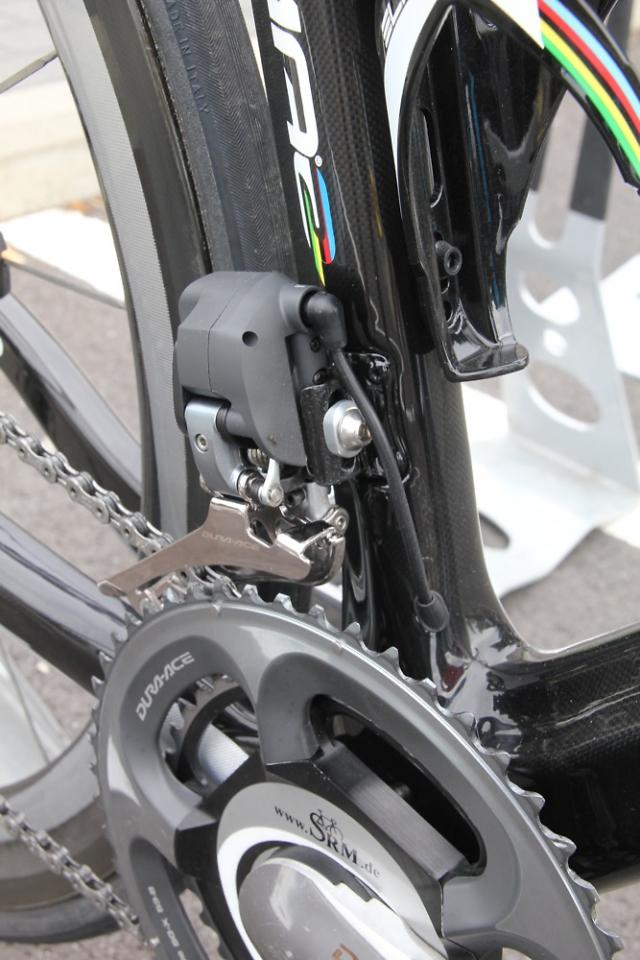 Cavendish’s bike comes with a Shimano Dura-Ace Di2 groupset. That’s the existing 10-speed 7970 Series Di2 rather than the 2013 11-speed 9070 version that we’ve reported on previously. The new version doesn’t appear to be ready yet; not even for the pros. Team Sky would almost certainly be front of the queue for trying it out because they were very much involved with the development process of 11-speed Dura-Ace. 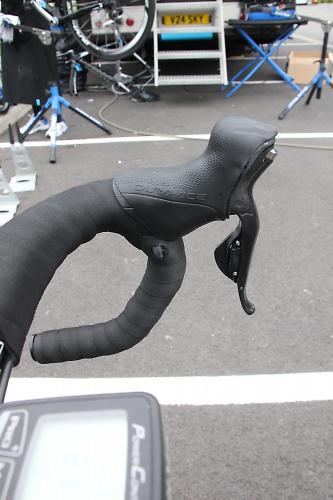 Cav uses sprinter’s satellite shifters mounted on the bars so that he can change gear easily when riding out of the saddle and on the drops. You can just see them poking through the bar tape below the normal shifters. And doesn’t he appear to have double-layer hoods on those dual control levers? Lots of the Team Sky riders like to have two layers of bar tape for extra comfort and Bradley Wiggins has three. Maybe Cavendish is after something similar with his lever hoods. 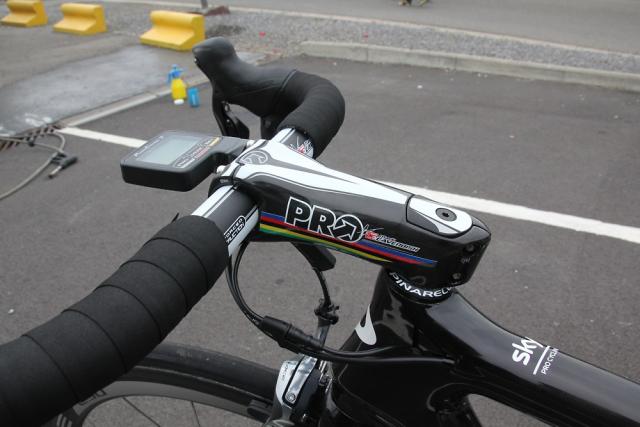 That bar and stem combo is Pro’s Vibe Spring in a Mark Cavendish signature edition. The massively oversized stem is a unidirectional carbon-fibre monocoque while the bar is 7050 alloy with internal ribs for reinforcement, keeping things stiff on that final sprint to the line. 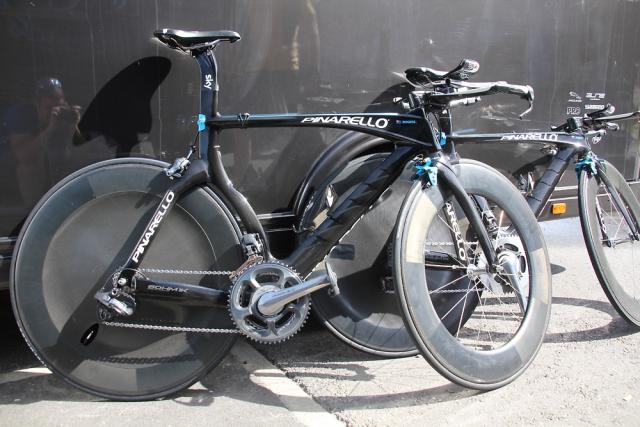 The Team Sky riders take on the time trials with Pinarello’s Graal TT bikes which are made from the same 60HM1K that Pinarello use for the Dogma 2. This one belongs to Australian Richie Porte and it’s the version designed specifically for a Shimano electronic groupset (check out demon photographer Tony in the reflection; pure class). 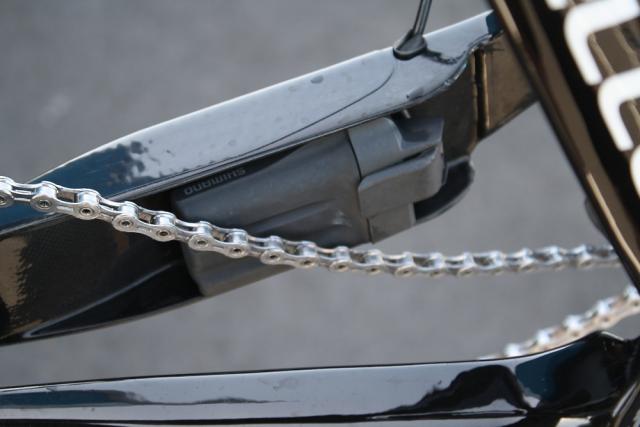 The battery is squirreled away inside a recess on the inner edge of the chainstay. Some other manufacturers haven’t got this far yet and still bolt the battery externally to a TT frame, compromising the aerodynamics. 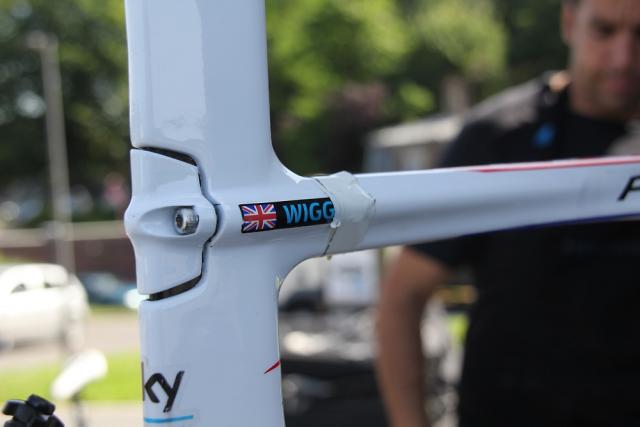 Details like that can make a big difference. You can see how the seat clamp on Bradley Wiggins’ training bike, for example , sits flush with the seat tube to keep drag to a minimum. And the cage on this team bike is designed to take a skinny, aero bottle rather than a standard one. A normal bottle has a large effect on airflow.

The mechanics also chop off the excess material at the back of the Pro Missile aero bar extensions. If it’s not needed, it goes. 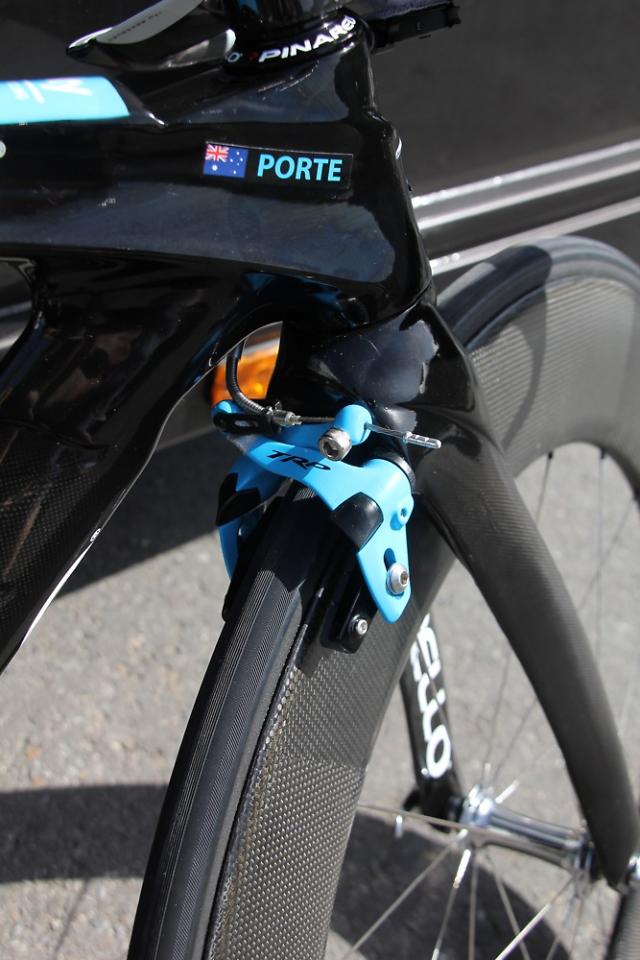 Team Sky use a TRP direct mount brake (rather than attaching via a central bolt, each arm is attached straight on to the fork leg) around the back of the fork legs where it’s more sheltered from the airflow. That looks like the TRP T922. Groupset sponsor Shimano don’t currently make a direct mount TT brake although they’re adding a Dura-Ace model to the lineup for 2013 so we imagine Sky will be using those next year. 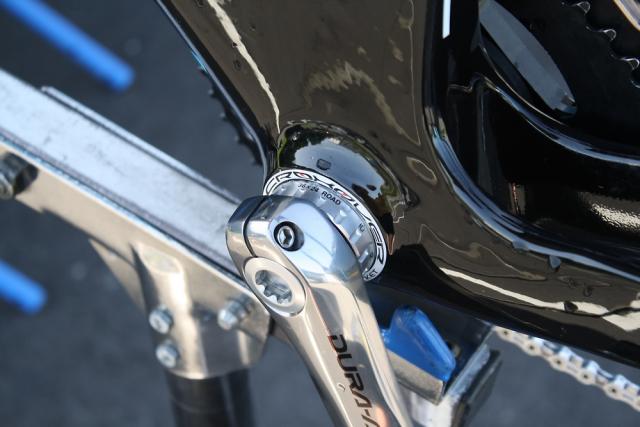 Pinarello still use external threaded bottom brackets on both the Dogma 2 and the Graal. Most of the other big manufacturers have switched to an oversized press fit design on their performance machines for increased rigidity and efficiency. 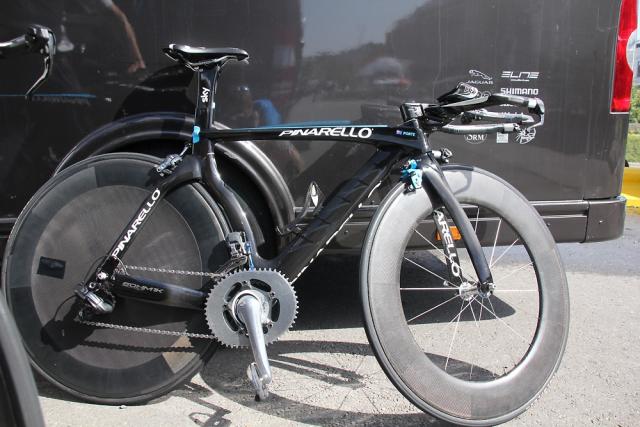 Shimano provide the wheels for Team Sky although that time trial combo on the Graal doesn’t look like anything from the current range, or that of Shimano’s sub brand Pro. They look like Heds to us, with the graphics removed. We could be wrong but that appears to be a Stinger S9 up front and a Stinger Disc FR at the back,

While we’re busy identifying unbranded stuff, that appears to be an O.Symetric chain ring on Richie Port’s bike, the same brand used by Bradley Wiggins, among others. 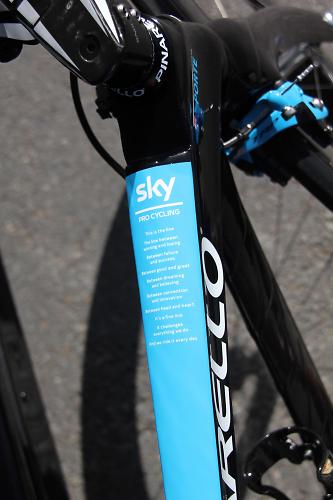 The Sky bikes have the team's motivational statement printed on the top tube. To save you squinting it says: "This is the line. The line between winning and losing. Between failure and success. Between good and great. Between dreaming and believing. Between convention and innovation. Between head and heart. It is a fine line. It challenges everything we do. And we ride it every day."