David Arthur was in Kortrijk, Belgium for the worldwide launch of BMC's new aero road bike
by David Arthur @davearthur

It's hard keeping details of new bikes secret these days. The engineers want the bikes tested in the real world, and riders want time on the new bikes at races of lesser importance than the Tour de France, before giving them the thumbs up. So it was unavoidable that BMC's new bike would be spotted when it was pressed into service at the Dauphine and Tour de Suisse last month.

Now the-not-very-well-kept secret is out, the TimeMachine TMR01 is the company's all-new bike designed to be as aerodynamic as possible. It completes a three bike line-up, including the recently introduced GranFondo, designed for the Spring Classics, and the Tour de France winning TeamMachine. The TimeMachine is aimed at rouleurs, sprinters and escapees who need every aerodynamic edge they can get. 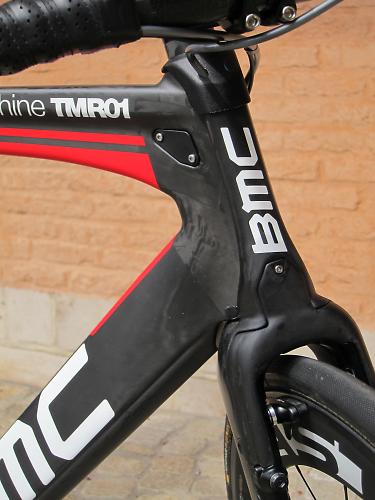 It's worth remembering that BMC have been at the cutting edge of road bike development for only a short time. Until 2001, the then mountain bike only company had no road bike to call their own. Starting with a blank sheet of paper, but some strong ideas, the company that staffed by passionate cyclists and keen engineers set out on a path that would see the brand become one that is highly regarded for innovative product design. And the only bike company to have their own race team.

A clear interest in supplying their team with the best possible products to allow them to deliver the results has led to the introduction of the sleek and beautiful TimeMachine.

The development of the TimeMachine happened at about the same time as that of the TM01 time trial bike, introduced a year ago. The design process for that bike shaped their understanding of aerodynamics and how to overcome the challenge of managing airflow within the UCI's strict regulations. With such a depth of understanding it was clear there was an opportunity to apply the same logic to a road going machine. There are several principles key to the TMR01. First is the use of the truncated wing profile (not unlike a Kamm tail) for the main sections of the frame. To reduce the degree of turbulent air BMC use Tripwire, their name for a smooth groove at the leading edge of forward facing section. This delays flow seperation and keeps the air attached for as long as possible, minimising drag - in essence it's doing the same job as the dimples on a golf ball. 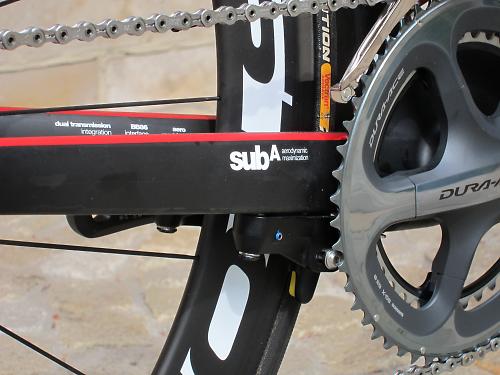 Another key design consideration is summed up with their Sub A concept, which aims to minimise the frontal area of the frame. Visually the front end of the frame is as narrow as it's possible to conceive, but the most dramatic design solution here is the integration of the front brake into the fork and the addition of the carbon 'shroud', a non-structural element attached to the fork crown,  sitting just ahead of the head tube and clamping to the steerer tube beneath the stem. It acts as a cable guide too. 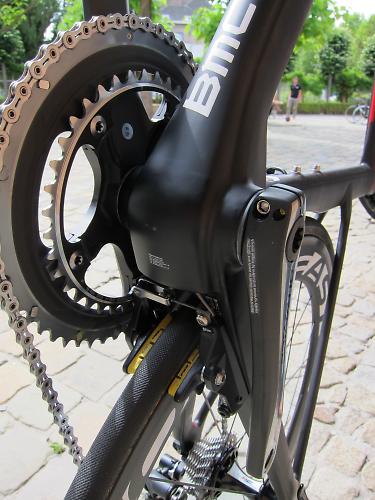 The same integration is seen with the rear brake, which is tucked behind the bottom bracket underneath the chainstays. The brakes are essentially mini V-brakes so should promise far greater breaking performance than that offered by standard callipers. And on the subject of adjustability and maintenance, BMC tell us this is something they didn't overlook and have ensured the brakes will be durable, especially given the rear brakes placement, and will be easy for people to set up and maintain at home. 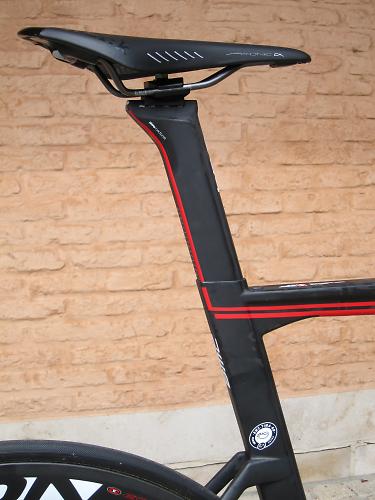 At the seat tube the clamp is a double wedge design with the bolt discreetly hidden beneath a rubber bung on the top tube, fore of the seat tube. The seat tube follows the same design principles as the frame, with a truncated aero shape and Tripwire feature. When Shimano's seatpost Di2 battery becomes available next year the TMR01 will readily accept it, as BMC are keen to keep such accessories hidden inside the frame and out of the airflow. Besides their pro cyclists, BMC also supports many triathlon and Ironman professionals and so the seat clamp has three different offsets; 0, 15 and 30mm, keeping everyone happy.

Not only is this their first aero road bike, it's also the company's stiffest ever road bike. Delivering a frame that would offer responsive handling and a solid platform for getting power onto the road was a key requirement added to the design brief. BMC ensured the frame is plenty stiff enough. This is evidenced in the chainstays, large bottom bracket area and BB30 bottom bracket. The layup of high modulus carbon fibre has been optimised to ensure high lateral stiffness. 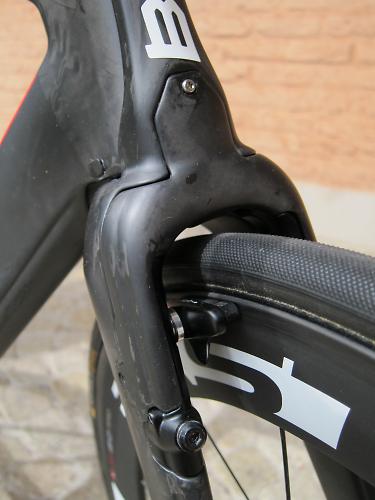 When it came to wind tunnel testing, which BMC told us was extensive and involved some of the team riders, it performed well. With a 50kph frontal wind the TMR01 reduced drag by 21% compared to the TeamMachine SLR. That's a saving of 28 watts, a considerable saving if you're in a break all day, or sprinting for the line. When sprints can be won or lost by less than a centimetre, such advantages are not to be sniffed at.

The final production frame weighs 1040g, and with a 2013 Shimano Dura-Ace Di2 groupset, Easton finishing kit and Easton carbon deep section wheels, weighs in at 6.8kg. So you can have your aero advantage with no weight penalty. Expect this bike to become the default choice of many of BMC's strongmen.

Availability is slated for September/October, with the bike getting its first public outing at Eurobike. We'll bring you a first ride review as soon as we get the chance to ride one.

Road.cc: We're here in sunny Belgium standing next to the TimeMachine TMR01. An important bike for BMC?

Andrew James: We see it as the evolution for our team riders, which is obviously where we start from, we are renowned for high-end racing bicycles.  WE see now in everyday usage of bike by the team at different races that it's now becoming so pivotal where they choose which bike for the job. We have now a specific bike like the GranFondo for the classics, to give that extra comfort, we have bikes like the TeamMachine which of course Cadel Evans rode to victory last year in the Tour de France, and now we have a bike, the TMR01, which we seeing fit in perfectly as a bike for the rouleurs of the team, those guys out front all day, the sprinters. But it's also good, and we always push extremely to not forget our triathletes, we see this bike as perfect for spring distance triathlons.

So it's about giving your team a choice of tools for them to pick from depending on the demands of any given stage or race?

That's a perfect analogy. They now have the choice of whatever they want, and they get to pick and choose every day they get out there, what they want to ride on.

Does the direction and development of the products come right from what your team need to perform at their best then?

We can't keep the blinkers on, we have to show that while it's our name on the jersey of the BMC team, we also have to be a company that sells bikes and turns a profit. So we have to keep that in mind, and we do a balance of bikes that will fit everybody. And like we saw with the GranFondo launch earlier this year, it's often the bikes that the team are requesting and finding a very real need for, are translating through. Okay, we may change specifications and wheels, things like that, but in essence those are what the end consumer are looking for too.

As road bikes are reaching a pinnacle of lightweight and stiffness, aerodynamics is the last area of development. Do you see aero road bikes becoming a common sight in the peloton and on the road in general?

We watch with interest some of our competitors who seem to be doing an all-in-one bike. It's light, it's comfortable, it's aerodynamic, for us we see that every time you do something like that, put it all together, it's compromised. Whether it be the weight, the stiffness, the aerodynamics even, so we sticking to a pretty clear line. And you'll see it coming through  further in the very near future from BMC. We have very direct road racing bikes, which will be a focus on weight. WE have endurance bikes where the focus in on weight and also comfort. And we now have a very real aero bike, where aerodynamics and stiffness are the focus.

When developing the time trial bike, was the TMR01 also on the drawing board?

It was already there. We had already started the development of this bike before we launched the time trial bike. So it kind of overlapped by about 12months. It was takes about 18 months to two years to go right from day one to the last day of frame development, and for this is overlapped about halfway. So we already knew that there was a lot of thing we couldn't do with the road bike because of UCI regulations, but we knew that there was a lot we could use that would give this bike features that is has now.

So, a dream start for the new bike would be a Tour stage win then?

Yeah. But we've got a different focus for this really. Like I said, this bike is for the rouleurs, we're happy to see this bike out there like cannon fodder for the stars. Guys like Michaël Schar, George Hincapie and Marcus Burghardt, towing the peloton along, setting up the leaders of the team.