Weighing a claimed 975g, the new PRO TeXtreme disc wheel will make its debut at the Eurobike show in August, according to an announcement from PRO’s parent company Shimano this week. We’d be surprised if that doesn’t mean you’ll spot it in use by PRO and Shimano sponsored teams in the Tour de France.

PRO’s current rear discs weigh a claimed 1260g. The saving comes from a new carbon fibre technology that PRO claims is new to cycling. The wheel is laid up with its carbon fibres arranged in tapes rather than woven yarns, and the tapes are laid as straight as possible. According to PRO, this means the fiber properties can be exploited most effectively for carrying tensile and compressive loads.

PRO calls this process ‘Spread Tow’, tow being an untwisted bundle of continuous carbon filaments, according to Wikipedia. An added advantage is better surface smoothness.

The wheel is then moulded in one piece in a pressurized oven, rather than being made of two shells joined together, which also helps save weight and improve strength. In keeping with the trend for wider rims to improve the airflow off the tyre, the wheel’s aerofoil shape ends in a 24mm rim.

The PRO TeXtreme disc wheel will be available within a complete disc line up at Shimano Ultegra and Dura-Ace level. The wheel will be assembled with an 11-speed Dura-Ace hub, but it is 10-speed compatible. A protective wheel bag and a valve adapter are included. 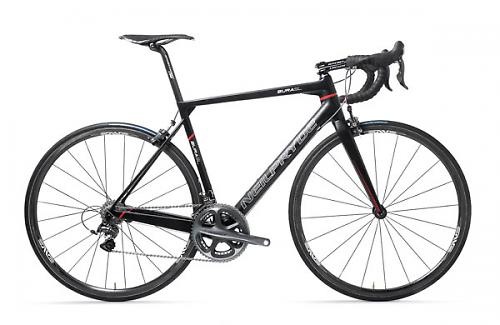 If you don’t have enough breath-takingly light carbon fibre frames to choose from, windsurf-turned-bike company Neil Pryde tells us that its 750g BURAsl frame will be in production later this year and available to buy toward the end of the year.

We previewed the BURAsl back in March when it was announced at the Taiwan bike show. That claimed weight is for a Large frame, but NeilPryde say they haven’t sacrificed rigidity in order to get the weight down - reinforcing struts at key areas on the frame keep it stiff.

No details yet as to pricing or complete bike specs. 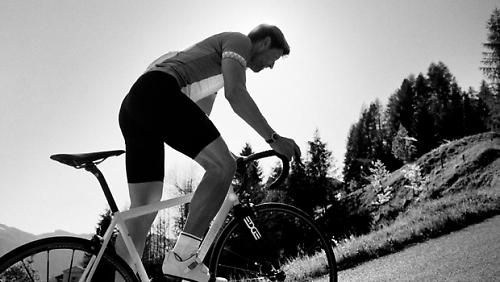 If you don’t want to buy this jersey from the name alone then you will when you hear our top bit of road.cc trivia.

In 2010, four Rapha riders, including our very own Mat Brett, set out to follow the first ever Tour stage route into the high mountains. This 326km journey took them into the very heart of the Circle of Death, battling with the Aspin, Aubisque, Peyresourde and the mighty Tourmalet.

You can see how they got on in this film:

We’re also told that there is a big framed still of Mat from the movie at Rapha HQ. It’s in the toilets apparently, and he looks moody and manly. What we don’t know is whether it’s in the ladies or the gents. 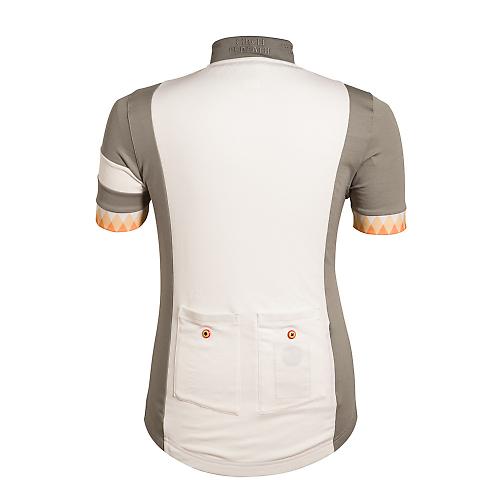 Anyway, enough of that. The Circle of Death Jersey is a tribute to that 1910 ride, and the group of mountains that featured then, and also in the queen stage of the Tour de France (the hardest stage that really sorts the men from the boys).

The jersey is made from merino-rich technical fabric, with a slim cut and side panels for fit, while the slightly longer arms and fine-ribbed cuffs are a nod to classic racing shirts. 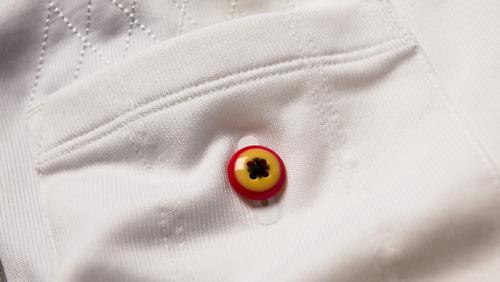 The names of the climbs in the Circle of Death are printed on the collar, and the two rear jersey pockets have buttons that are designed to represent the eyes of the the Lammergeier, or bearded vulture, which stalks the Pyrennees. Seatposts with built-in fore-aft adjustment tend to be rare and very expensive beasts. The new Initio post from Italian component maker Ratio provides an extra centimetre of horizontal adjustment beyond what's available by just moving your saddle in the seatpost clamp, and costs £84.99.

It's a similar design to Ratio's carbon fiber Tacto CSD Classic seatpost, except that the carbon post costs £159.99, and the only other post we know of that offers similar functionality is the Look Ergo 4 for about £200. So if you have a burning desire to mess about with your fore-aft saddle position, this is a relative bargain. 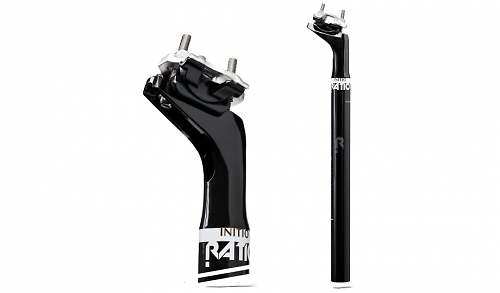 The Initio is made from 7075 aluminium and is available in 31.6mm and 27.2mm widths. It provides 12mm to 22mm of rearward offset, with a two-bolt clamp for precise saddle angle adjustment. Claimed weight is 350g, but that's for the 400mm long 31.6mm width version; road bike versions are likely to be lighter. And that's the first time we can think of that a manufacturer's quoted the biggest size in their claimed weight! 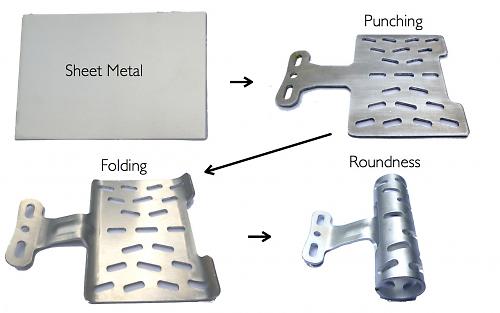 We always love Kickstarter for innovative bike gadgets and the chance to be the first to own a really cool new idea. This week we’ve found a couple of simple yet brilliant ideas that might be right up your street.

The first is the Beam+ Ultralightweight handlebar extender, which clears some of the crowding in your cockpit. Bike computers, Garmins, bells, lights - there’s a lot to haul about, so this 24g aluminium stubby screws onto your stem and gives you an additional three inches of space to play with. 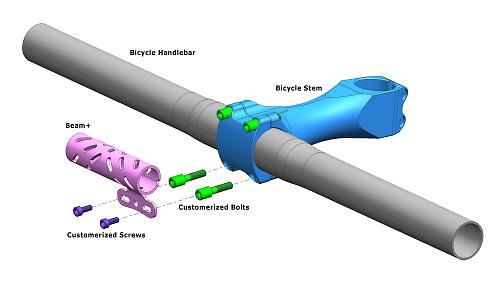 Because of the way it’s mounted (onto two of the bolts of a four-bolt stem plate), you don’t need perfectly round bars, it doesn't take up any space, and it’ll fit to any bike. You can mount it in two positions - the higher one good if you need to keep an eye on instruments on there, or the lower one which is best for lights, to avoid dazzling oncoming traffic. 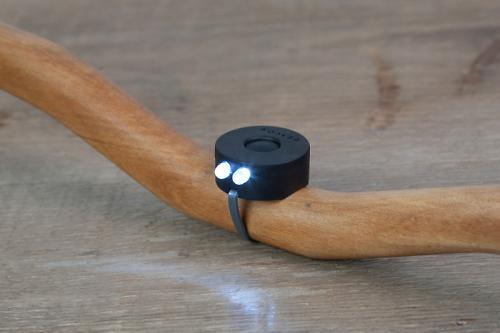 Talking of lights, that’s where the Beacon Bike Light comes in. It’s a very simple concept - a low-profile LED light that’s held on with a zip tie, making it far less pinchable (or so the theory goes). Obviously it’s not difficult to snip a zip tie, but it’s a step up from opportunistically plucking one right off a quick-release mount - you’d need to be carrying scissors or a knife. Then, once stolen, the thief would have to buy another zip tie to use it again.

The Beacon comes in red or white, with two LEDs, and the zip tie mounting system means it’ll fit almost anywhere - just snip off the excess when you’ve pulled it tight. On flashing mode they’re said to last more than 150 hours, and the idea is that when they do die, you snip the tie and buy a replacement pack of batteries and new zip tie. 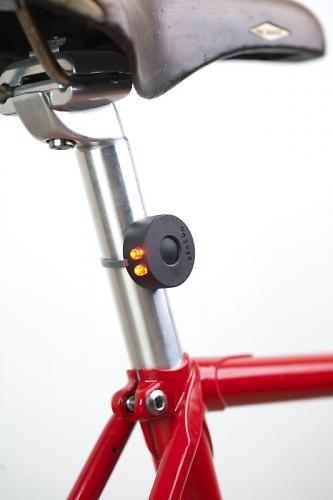 It probably wouldn’t be your go-to light for all eventualities, but it looks like a handy little backup that’s always there to get you home.

The Beacon Bike Light is $25 a pair to early adopters via Kickstarter, and the Beam+ bar extender is $24 in a selection of five cool colours.

More details at Beacon and Beam+ 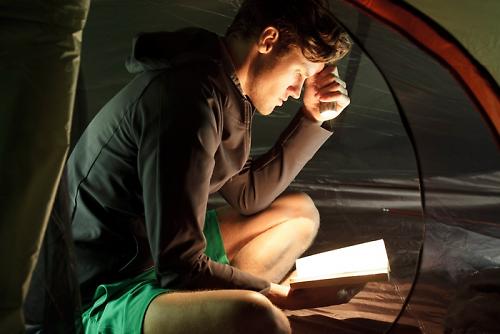 We did ask ourselves who in their right minds would go to their tent for a little sit down and a read in a pair of short shorts and a weatherproof shell jacket, until we read the first line of the blurb about the Outlier Freeshell.

“We think that some of the best garments to wear are the ones you forget you have on.” Ah then - question answered. He’s just forgotten he’s wearing it.

There are lots of things to like about Outlier, their bike-clothes-that-look-normal aesthetic, their use of quality fabrics, and most of all their made-in-New York label (no sweatshops here). 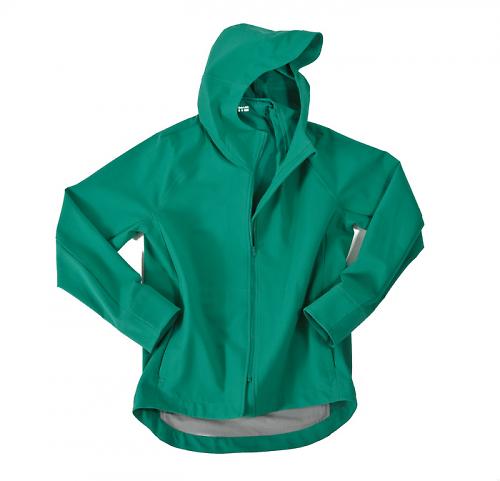 This latest offering is basically a non-winter jacket, that stands up to cool breezes and light rain but doesn’t cook you when the sun comes out.

That’s down to clever fabrics, and Outlier say:

“Our core 4Season fabric: versatile, comfortable and durable, and highly breathable. The self-cleaning nanosphere treatment means that coffee, wine and dirt roll off with ease, keeping you looking fresh and clean in the trickiest of situations.

“The Schoeller Dryskin Extreme fabric looks elegant, yet repels water. But when it does saturate, will dry in minutes (generally around 15-20). The doubleweave structure means it's tough and durable on the exterior, yet soft and comfortable inside.

“The four way stretch doubles-down on that comfort and means this jacket moves freely through any situation.” 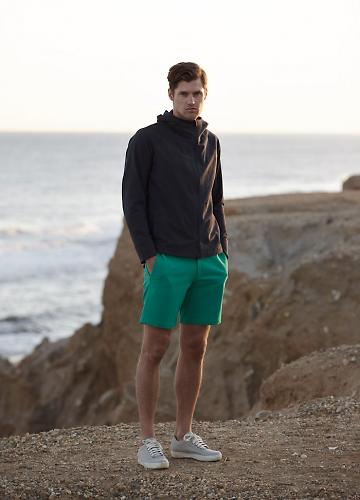 Like everything Outlier, it’s cut to fit, but not constrict, and it definitely looks smart enough to wear to the pub, once you’ve finished looking moody in your tent.

It’s $365 (it’s eye opening what you pay for clothes that aren’t made in the Far East), and comes in Slate Grey or Seapunk Green, whatever the hell that is. 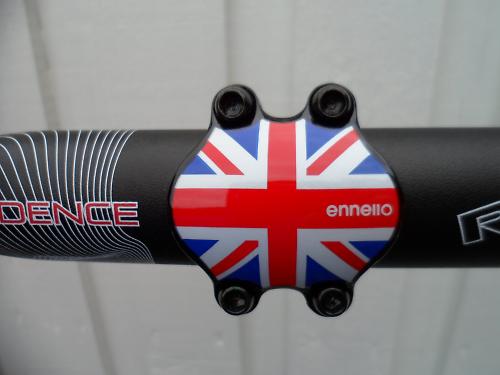 If you’re not sick of the sight of the  Union Jack, what with the Jubilee and the Olympic giant cigarette lighter torch, show a little patriotism with a red, white and blue stem from Enello in Sweden.

It’s available in 90, 100, 110 and 120mm lengths, with a 7 degree angle, and comes with a glossy front plate to show your true colours. Enello do a whole range of different front plates, but you have to buy the complete stem as they aren’t compatible with other brands. 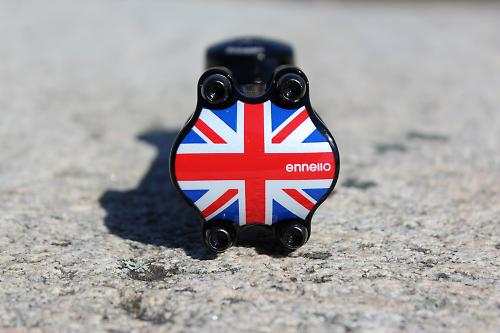 Primo stem with Union Jack frontplate is a shade over 110 Euros.