Phil Gale and his camera witness, tiredness, concentration & glory on the streets of Milan
by Philip Gale

In part two of our photo set of Phil Gale's pictures from the two stage finale to this year's Giro we head to Milan where the morning after tackling the brutal queen stage of the race featuring five climbs including the Mortitorolo and the Stelvio the riders faced a very different final challenge a 28.Km time trial through the streets of Milan.

Not surprisingly there were a lot of tired faces on show for a stage that would decide whether Garmin Barracuda's Ryder Hesjedal, Katusha's Joaquin Rodriguez, or even possibly Thomas De Gendt - winner on the Stelvio would end the day wearing the race winner's maglia rosa. 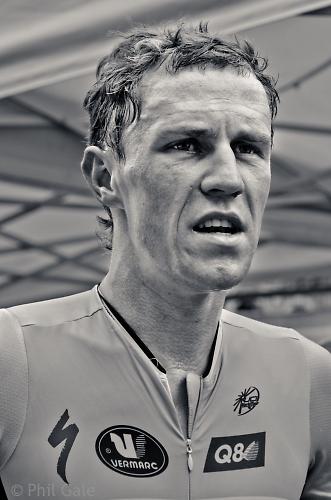 Ahead of them lay a technical course through the streets of Milan from the Castello Sforzesco in the city centre towards the northwestern suburbs, then back into the historic heart of Milan, via the inner ring road. As they pushed for the win the demands of the course had more than one of the leading riders scrabbling for traction on corners. Thankfully the overall winner was not decided by a crash. Although Rodriguez put up an incredible battle on his new Canyon TT bike to limit his inevitable losses to Hesjedal - the stronger TT rider, the Canadian prevailed by 16 seconds overall, while De Gendt after jumping from 8th to 4th with is stage win the previous day made the final jump in to third place on the podium. In the relaxed atmosphere surrounding the riders and teams in Milan I spoke with French Canadian rider Dominique Rollin. He was helping out at the back of the Francais De Jour team truck after dropping out of the race during yesterday’s killer queen’s stage.

“It is never nice not to finish a stage race which you are in. I really would love to be in the bus getting ready to do the final time trial but I am empty. On the second rest day we had some bad weather so were not able to ride properly. I did a short ride on the rollers but it was not enough. My body relaxed and I got a fever. Three of our team had the same and I hear that a lot of riders from many other teams had the same. Before that I was in the best condition I have been in for a long time. I weigh 85 kilos which makes all of the steep climbs in the Giro hard work, I need to be on A1 form to get over them and I was. There was one stage when Sandy Casar almost fell off of his bike when he saw me still there on one of the bigger climbs. Then once the fever came, and with these really hard stages at the end of the race, I just dug more and more into my reserves.

"On Friday after the finish on the Alpe di Pampeago I just sat at the finish for 20 minutes unable to move. Then yesterday on the first climb (Passo Tornale) I was dropped. I tried hard to get back but could not. To be honest I should have climbed off a couple of days earlier but did not want to let my team down. I was also in a bad crash a few days before that when a team helper’s car turned right on me (he said whilst showing me his bruises and cuts). Now I am ready to go home and rest. Get my energy back and then plan the rest of my season. I have not had the best of luck this year so think that it is time that things changed.” I left Rollin waiting to meet his parents who had come to Milan to see him finish the race, but ended up having lunch with him whilst the time trial took place.

Finally as his top riders were warming up for the final time trial I spoke with Brit, Garmin Barracuda Director Sportif Charlie Wegelius.

“The Giro has been a really great race for us. Ryder has performed so well being well placed and well supported by the whole team at all the important moments. There have been many times were we have had to take control of the race because Kastusha have not wanted to. Our team stepped up to the challenge with our climbers giving their maximum for Ryder. He is a very calm rider and a strong leader who has motivated us all. Robbie Hunter should have really quit the race after his crash the other day but wanted to carry on to help everyone.

"I think that we can pull off the win today. It is not the best of courses to really gain a lot of time on, but Ryder is normally a lot stronger in the time trials. This last week has been tough for him, but it has been hard for all the riders. As with all Giros things get a little extreme when we get into the mountains, but Ryder has recovered well and is very relaxed about today. Not only does he have the pressure to win, he will also be the first Canadian rider to win a Grand Tour, which is what he has been working towards this year. As a team we do not have any regrets. We showed our strength in Verona at the team time trial and also have had two riders in the pink jersey. It is a shame that Farrar had his crash, but he will probably be back for the Tour de France.” Focussing before the final test 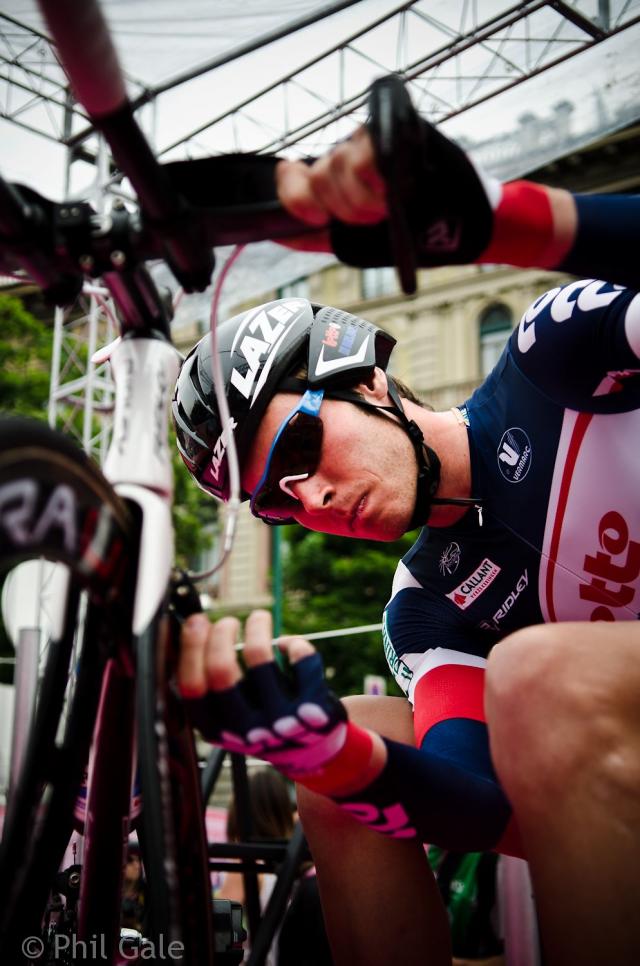 Final checks while waiting to start Tosato readies for the depart