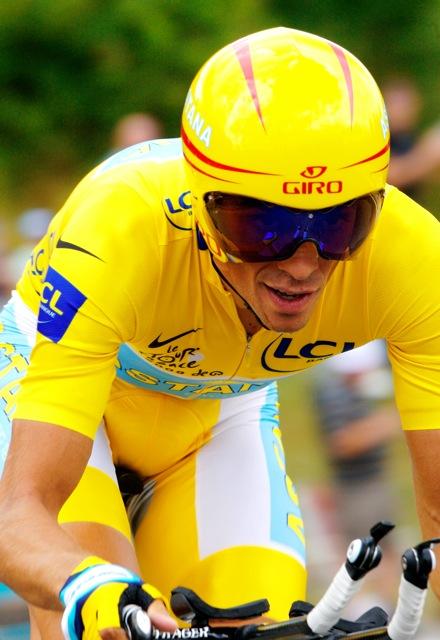 Alberto Contador further stamped his authority on this year's Tour de France with a ride of incredible power to win the time trial in Annecy today. Contador put time in to all his rivals for the general classification. Behind him Andy Schleck consolidated his position in second place and Lance Armstrong moved back into a podium position at the expense of Frank Schleck and team mate Andreas Kloden - who is equal fourth with Brtain's Bradley Wiggins.

Such was the emphatic nature of his win, coming home 3 seconds clear of pre-stage favourite, Fabian Cancellara, in a time of 48:31 that even Contador admitted afterwards the result had taken him by surprise.

By the standards of this week the Annecy time trial stage was pretty much pancake flat, okay it included the not very French sounding category 3, Bluffy Climb, but that was no more than a pimple compared to the monsters the riders had faced earlier in the week and the one that lies in wait on Saturday.

It was a mixed day for Bradley Wiggins he pulled himself back up into fourth place but he faded on the return leg of the course to finish a disappointing sixth on the stage – two seconds back on his Garmin team mate David Millar. Behind him Lance Armstrong was able to limit his losses to Wiggins to such an extent that he moved back into third position, and with the Ventoux to come the Texan will be confident of holding on to that. To go higher he will need to dislodge Andy Schleck and that may be a tall order – the Luxembourger didn't have a bad day at the races in Annecy either and he will certainly be looking to do well on the Ventoux as well.

The Tour weather gods decided that today was not going to be a fast run in the sun, conditions weren't easy with a blustery wind and rain prompting Chris Boardman to Tweet from the course "The wind is up and down, having a big effect on times, some getting head wind, some not. Rain will make fast descent risky." Too right Chris.

Of the other contenders for the overall this was going to be a day of damage limitation for the Schleck bros, the race of truth is not their natural habitat. The same could not be said for the three Astana riders, Armstrong, Contador and Kloden have all shown themselves to be accomplished time triallists, and the course and distance in particular looked like it might suit the German a point made by Armstrong in a pre-stage Tweet “ Watch Kloden fly today...”

Millar and Cancellara were both out relatively early and true to form the Swiss rider posted the fastest time so far 48: 34 overhauling the Russian TT specialist Mikhail Ignatiev (Katusha) despite being 18 seconds down at the first checkpoint, Millar came back in 49:11 to place third place, and fellow Garmin rider Dave Zabriskie, also a useful man on a TT bike was fourth with a time of 49:32. Of the other notable speed merchants Michael Rogers (Columbia HTC) had a day to forget finishing in 50:09.

A slew of riders then gave it their best shot and aside from Gustav Larsson pushing Millar down into fourth place made no real impression on the top of the standing.

Then we were in to the Top 10 on General Classification Kloden looked powerful at the start, and Wiggins looked good too with a superb position on the bike, then it was Armstrong's turn on his Livestrong TT bike (a hint there about his 'new' team perhaps?).

Wiggins scorched through the first time check in the lead one second up on Ignatiev in 20:20, Kloden was next of the big contenders through 19 seconds down on Wiggins. Armstrong then went through in 20:29 just nine seconds back on Wiggins. Next came the Schlecks, Frank was first through 44 seconds back on Wiggins, Andy Schleck went through only 26 seconds down. Everyone was now waiting for Contador… if Wiggins was on fire Contador had gone thermo nuclear going through in a stunning time of 20:02.

That climb had taken it out of Wiggins though, he went through the fourth time check in fourth place in a time of 45:49, Kloden was 11 seconds back on the Brit and he held that gap to the finish Armstrong was 44 seconds back.

Wiggins came home in 49:13 he'd slowed on the final run in Kloden came back in 49:24, Armstrong roared home in 50:00 dead enough to get him back on the podium. As expected Franck Schleck coming home in 51:04, brother Andy came home in 50:15 enough to keep in second overall

With one man left out on the course Cancellara's 48:34 was still the time to beat for the stage but that man was Alberto Contador and he was roaring back tearing through the final time check 15 seconds up on Cancellara and he stomed home in 48:30 to win by three seconds.

Top 10 on General Classification after Stage 18