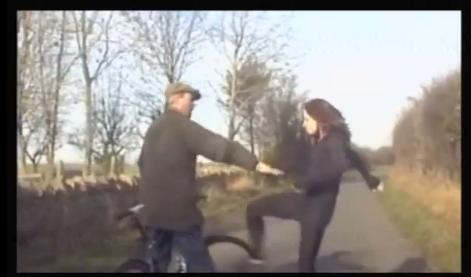 The protagonists of a video released by Gloucestershire police showing an altercation on a country road between a slow-moving cyclist and a black clad woman have come forward to give their own versions of events. The police video, plus the original version which suggested that conflict between hunt supporters and hunt monitors lay behind the incident, gave rise to much speculation in comments here on road.cc about the events.

Today, the Mail on Sunday has revealed that it has tracked down the man and woman involved in the incident which took place near Bibury in January, the former being 54-year-old Christopher Cox, joint master of the Oxfordshire’s Heythrop hunt, based in Prime Minister David Cameron’s constituency, with the latter identified as 23-year-old hunt saboteur, veterinary science student, part-time artist’s model and single mother Emily Marsh.

The Mail goes on to describe how the redheaded Miss Marsh – said to be a member of the Guildford Hunt Saboteurs’ ‘Whippet Squad’ goes by the name of the Foxy Lady or simply The Fox and isn’t averse to turning cartwheels while filming hunt activities.

Meanwhile, it also makes much of Mr Cox’s lineage, said to stretch back via the Irish aristocracy to William the Conqueror, as well as his family’s military background.

Those pen portraits sketch out two figures in what the newspaper describes as “a quietly simmering war being played out in the countryside because of the hunting ban,” introduced under the Hunting Act 2004 and which among other things makes the hunting of foxes with dogs illegal.

Hunt monitors seek to ensure that hunting takes place within the law, which for instance permits hunting an artificial trail including gathering video evidence, although confrontations between them and members of hunts are not uncommon, with each side accusing the other of violence at times.

The video posted to YouTube by police has been removed “due to a copyright infringement” made by user Zinfandelorganic, the poster of the original video, which remains on the site.

Speaking to the Mail on Sunday, Miss Marsh gave her version of the incident: “You have to understand that this was the culmination of months of abuse towards us,” she explained.

“They always try to hold us up and on this occasion there were about five cars behind our Land Rover. It was obvious what he was doing.

“Some of the other sabs asked why I didn’t pull him off his bike – I could easily have done. But I didn’t want to hurt the idiot.

“I was shouting at him to please move out of the way before I reached him. It was only when he went for my chest that I saw red and gave him a kick. But even then I only kicked his bike.

“He was just a foolish man brought up to think cruelty is okay.’

Miss Marsh said that she had contacted police following the incident “because the blow to my chest was painful and intrusive,” although she added that she took no further action because she had decided that “it wasn’t worth it.”

She continued: “I rang the police again last week after they put out their appeal. They said they had to investigate because of the video and would see me this week but haven’t.”

Mr Cox, a former army major who is now an insurance company director and lives in Stow-on-the-Wold, Gloucestershire, told the newspaper that the incident was “nasty.”

However, he dismissed suggestions that he had been riding his bike deliberately slowly in an attempt to hold up the hunt monitors, and said he was cycling because his horse was lame.

“There was plenty of opportunity to overtake,” he insisted, although the evidence presented in the original video suggests otherwise. “It could have been worse – there were ten of them,” added the former army officer.

He said that although he had not reported the incident to police when it happened, he did get in touch with them following last week’s appeal.

One hunt supporter who has encountered Miss Marsh while she has been carrying out her hunt monitoring activities said: “She is an incredibly fast runner, strong and fit, the Lara Croft of the antis,” adding, “Many of the hunt find her attractive and try to flirt with her, which she finds terribly annoying.”

Gloucestershire police told the Mail on Sunday that “the enquiry is ongoing” after a number of people contact them to pass on the identity of the people in the video.

According to the newspaper, the Heythrop hunt’s supporters include former News International chief executive Rebekah Brooks and her husband, racehorse trainer Charlie Brooks, as well as Top Gear presenter Jeremy Clarkson who has permitted the hunt to cross his land, all of whom live nearby.

It added that the RSPCA launched a private prosecution a fortnight ago against the Heythrop and four of its members in relation to what it the animal welfare charity alleges is illegal fox-hunting carried out by the hunt. The case is due to be heard at Banbury Magistrates’ Court in June 1, and according to the Mail on Sunday could be “politically sensitive” for Mr Cameron.