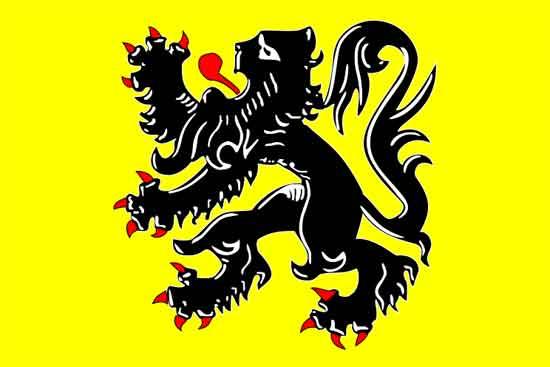 Tom Boonen of Omega Pharma-Quick Step has become only the fifth man to win the Tour of Flanders three times, winning by  a bike length from Pippo Pozzato of Farnese Vini with BMC Racing's Alessandro Ballan third. Pozzato and Boonen had been the only riders able to follow Ballan's attack on the third and final ascent of the Oude Kwaremont, the trio building what had become an unassailable lead over the chasing bunch as they enterd the final five kilometres. Fabian Cancellara, alongside Boonen the big favourite for today's race, crashed in the feed zone with 62 kilometres left to ride, reaking his collarbone and leaving him out of next week's Paris-Roubaix.

After four decades of the race ending in Meerbeke, with the Muur van Geraardsbergen often proving decisive in the final kilometres, this year’s 96th edition of the race saw finish switched to Oudenaarde. The closing third of the 255 kilometre parcours saw the double combination of the Oude Kwaaremont and Paterberg tackled three times. It was on the third ascent of the Oude Kwaremont that Ballan, winner of the race in 2007, made the move that would decide the podium as Pozzato and Boonen bridged across.

The BMC Racing rider, in the news this week due to the potential charges he faces as a result of the Mantova doping investigation in Italy, led his two rivals over the sixteenth and final climb of the day, the Paterberg, where the gradient hits 20 per cent. Behind, Liquigas-Cannondale's Peter Sagan tried desperately to bridge across, as Katusha's Luca Paolini had earlier tried to do, but the Slovak found himself in no-man's-land as the trio ahead streched out their lead.

Boonen, Pozzato and Ballan had been among 11 riders who had avoided a crash at the start of the penultimate climb of the Paterberg, with a little under 40 kilometres left. Although the main group came back together before the final climbs of the Oude Kwaremont and Paterberg, with Team Sky leading the chase, that meant that those three riders perhaps had less tired legs than most as one of the toughest of all races approached its denouement.

Sagan's pursuit of the three leaders on the last climb of the Paterberg proved in vain, and with 10 kilometres left they had a lead of nearly half a minute, doubling that over the next five kilometres. The make-up of the podium was settled, if not the steps those three riders would occupy.

Ballan led the trio under the flamme rouge, but Boonen and Pozzato were always going to e stronger in the sprint, the Belgian going early and just holding off Pozzato to cross the line first to win the race for the third time.

Cancellara’s exit from the race with more than 60 kilometres still to ride had changed its complexion entirely; it was no longer a case of shadowing the RadioShack-Nissan man and waiting for him to make his inevitable move.

The Swiss rider had earlier suffered a puncture and had also been forced to change bikes later on, but he was still in the main bunch as it headed through the feed zone some 63km out. Reports suggested that a musette had got tangled up in his wheel, sending the Swiss rider over the handlebars.

Helicopter shots showed Cancellara lying near motionless on the ground, surrounded by concerned team mates and soon after by a throng of spectators on a day when safety was under the spotlight, TV pictures showing a succession of near-misses involving team cars as they sought to avoid street furniture and spectators, causing riders to swerve out of their way.

It was an incident involving a fan that ended the race of one of the men considered to be an outside tip for today’s race, Sebastian Langeveld of GreenEdge.

With a little under 50 kilometres still to race shortly after the last ten riders of an earlier 15-man breakaway had been caught, the Dutch rider chose, as often happens in racing in the Low Countries, to jump off the main carriageway onto an adjacent segregated cycle bath as the peloton headed through one of the small towns that dot the route .

Panicking, a spectator – who aerial shots suggested would have been safer staying put – tried to move out of Langeveld’s way, but instead clipped him, the GreeEdge man falling heavily, his bike flying through the air, with Pozzato using superb bike-handling skills to avoid the prostrate Dutchman.

Following the end of the race, RadioShack-Nissan confirmed that Cancellara had suffered a triple fracture of the right collarbone. Treated in the aftermath of his crash at the hospital in Oudenaarde, he is being transferred to Basel in Switzerland to undergo surgery.