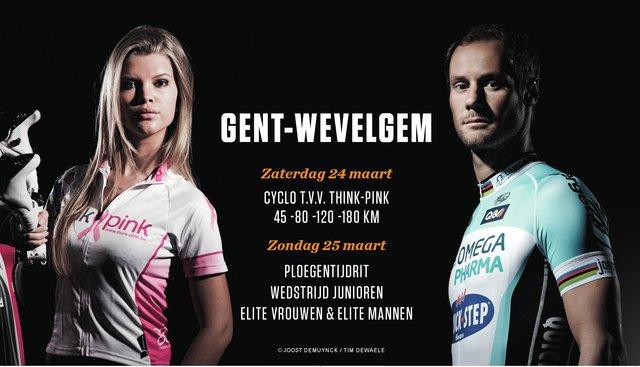 Select group contest finish, but Mark Cavendish wasn't among them...
by Simon_MacMichael

Tom Boonen of Omega Pharma-Quick Step, defending champion and quite literally the poster boy of this year's Gent-Wevelgem as the picture above proves, has won the cobbled Classic for the third time, beating Liquigas-Cannondale's Peter Sagan in a sprint finish contested by a group of 25 or so riders. Rabobank's Matti Breschel was third.

In a hard-fought sprint and somewhat scrappy and ill-tempere sprint for the line with a fair amount of leaning and pushing going on - seen team Sky's Edvald Boasson Hagen appeared to give a rival a shove - , a crash brought down riders including Movistar's Juan Jose Rojas. Missing from that group, however, was Boasson Hagen's team mates Mark Cavendish, who had been dropped from the main group on the way down from the Kemmelberg, the last but one climb of the 235 kilometre race.

By the  time today’s race, ridden on a beautiful spring day, entered the closing 50 kilometres, an earlier escape group comprising nine riders had been whittled down to just two – Anders Lund of Saxo Bank, and, a rare sight at the front of a race in Belgium in the Spring, the Euskaltel-Euskadi colours, sported by Ion Izagirre Insausti.

With less than 35 kilometres to go, as the riders tackled the Monteberg for the second and final time, the gap between the leading pair and the chasing group had been cut to two minutes and was tumbling quickly, as seven riders including Sagan and RadioShack-Nissan’s Fabian Cancellara managed to get away.

Behind them, a group of 25 riders had formed including Boonen, winner of the E3 Harelbeke on Friday as well as defending champion in Gent-Wevelgem itself. Missing from that group, however, was  Cavendish, who had hit the foot of the preceding climb, the Kemmelberg, at the front of the main bunch.

The  world champion told Belgian TV afterwards that while he had been among the front 25 riders at the top of the Kemmelberg, he'd found himself following the wrong wheel on the way back down and next thing he knew, a gap had opened up to the riders ahead of him that would prove impossible to chase down.

The two breakaway riders were swept up as the race headed into its final 15 kilometres, with the second chasing group, which included, besides Boonen, Katusha’s Oscar Freire and Movistar’s Juan Jose Rojas, having in the meantime also caught the Cancellara group.

Cavendish, however, along with Garmin-Barracuda’s Tyler Farrar, was in the next group down the road, 40 seconds behind with 15 kilometers left but with only Mathew Hayman and Ian Stannard working at the front for Team Sky, the gap widened over the next 5 kilometres and it was clear the world champion, who had highlighted on Friday how much tougher the final kilometres of the race had become, wasn’t going to figure in the finale.

Earlier, the first ever edition of a women’s race at Gent-Wevelgem was won by Great Britain’s Lizzie Armitstead, now racing for the Dutch outfit Team AA Drink/leontien.nl.