As Bespoked Bristol wrapped Sunday evening, Robin Mather who had previously won the judged 'Best In Show' award for his 'Camponneur' 650B tourer also took the public voted prize and went home happy.

It was only the second year of the Bespoked show for custom and boutique bike builders but in its new venue at Brunel's Old Station next to Bristol's Temple Meads the exhibition had already passed the previous year's visitor numbers by the end of Saturday. As Nick Hand one of the judges put it, "Brunel would have loved the engineering and creativity filling his old station."

Previously, on the Friday evening opening the overall 'Best in Show' award went to the West Country's own Robin Mather, a first time exhibitor but long-standing frame builder, who showed a deliciously well-thought-out randonneur/touring bike with smaller than usual 650B wheels that he hadn't even thought of a name for as the judges hurried to see all the available exhibitors' bikes. When he said that it was a bike that he envisaged cycling though France on with bread strapped to the front rack, the judges obviously suggested "Baguette" but Mather countered with, "Mmm, maybe Camponneur?" and so what turned out to be the winning bike was christened.

The Mather machine apart from lovely little details - article to follow, folks - mostly impressed with its sheer practicality with an unfussy lugged steel frame and a full complement of polished stainless racks. There was even an integral E3 dynamo lighting system where Mather had worked with the German makers Supernova to finish the normally black lamp housings in a silver finish. 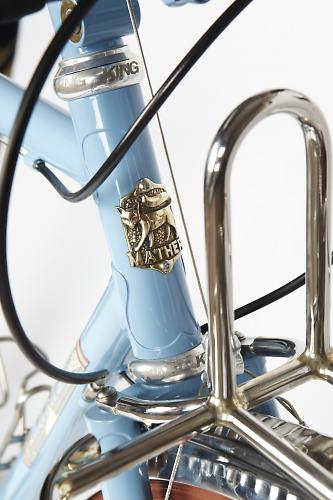 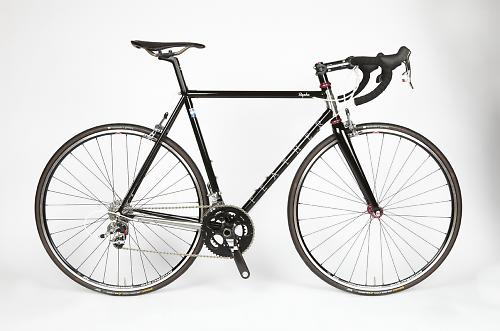 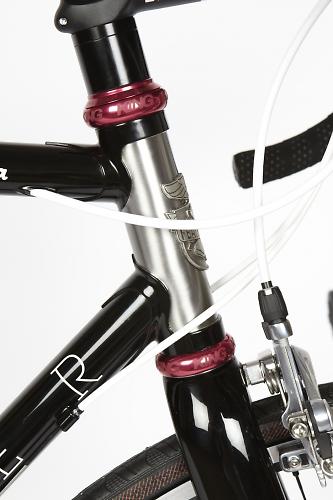 There was a whole array of road bikes commissioned by Rapha from six of Britain's finest builders; Tom Donhou, Robin Mather, Jason Rourke, Neil Manning of Condor, Dave Yates and Ricky Feather to complement the 'Continental' series of rides they're promoting across the UK this Spring. They are all plain black with pink Chris King headsets and hubs and they're all lovely with their individual touches. Somehow, though, the Feather Cycles machine with its Columbus XLR stainless steel frame looked 'just right' to the judges; a unanimous decision and the only one of all the categories.

Ricky Feather is another builder who likes his lugs but in looking for a pared down understated look - this is for Rapha, don't forget - the work was simple with the cutting back even extending to the gear cables running directly around the bottom bracket shell in the style of pre-1980s road frames. But he also wanted an oversized headtube so he could use a modern, carbon fork and he went for Columbus XCR stainless steel tubes, "for long Cointinental rides, it's not quite as stiff as (Reynolds) 953. It's going to be an all-terrain bike, it's going to get pretty dirtied up and we didn't want any corrosion." 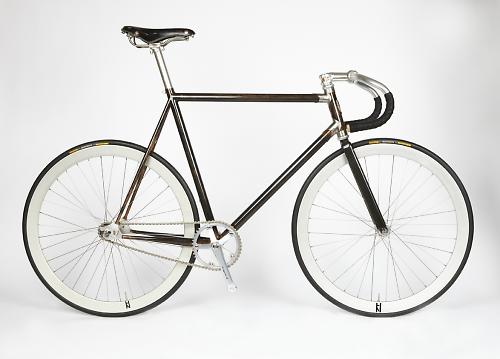 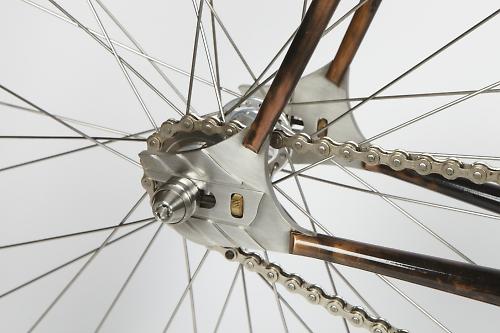 Dario Pegoretti came within a centimetre of winning this category with his frame 'Day Is Done' but Demon Frameworks stole this one on the line with his passion for making all the parts of the new 'Hermes' model including the exquisite adjustable wheel dropouts himself.

'Hermes' is one of a pair of bikes - the other one, the road bike - won 'Best Road Bike at the recent NAHBS show in Sacramento, commissioned by Mosquito Bikes in London to sell as a format model but individually custom built for each order. According to Demon's Tom Warmerdam the collaboration will allow him to indulge his passion for making all the parts - the lugs, fork crowns and wheel dropouts that builders normally buy in from specialists. 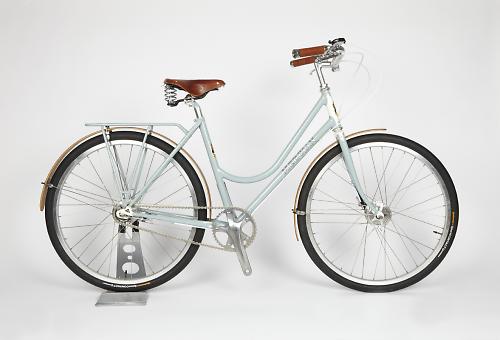 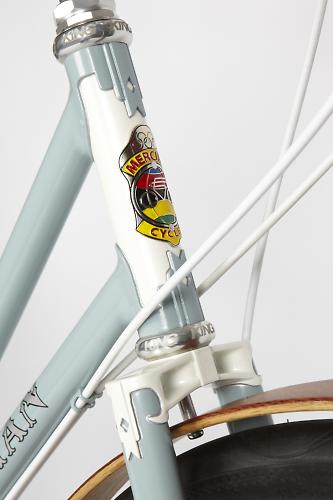 Mercian's owner Jane Mosley claims she was just designing a nice runaround bike for herself with no intention of Bespoked glory. The Art Deco lugs were like nothing the Mercian builders had made before but they made them anyway, her being the boss 'an all. 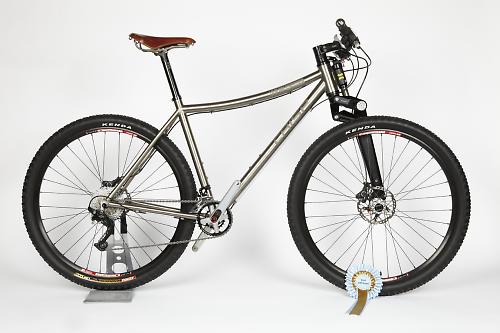 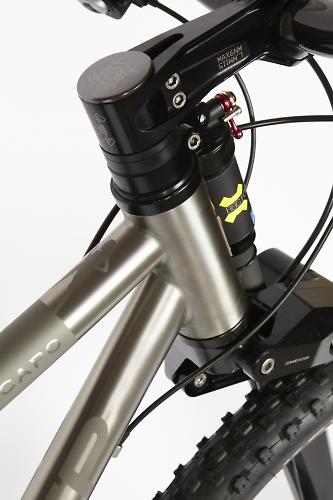 Texan Darren Crisp is based in Tuscany and makes custom titanium frames which he sends all over the world. His 'Il Capo' impressed Bespoked judge and mountain bike guru Steve Worland who liked its simplicity and purity "it looks just you think a mountain bike should look for the job." 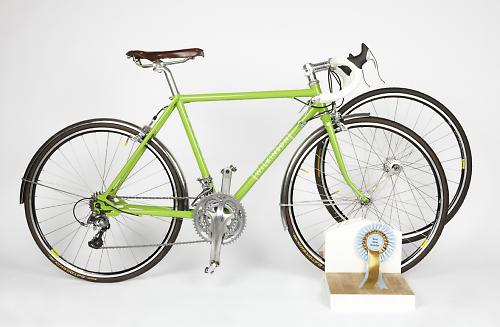 Matthew Wilkinson won the "Best New Builder' award - sponsored by Columbus and Ceeway - for his 'Mixed Gear' design that allows both a cassette or singlespeed rear wheel in the same frame. His show bike had a holder at the front fitted with the optional wheel as an homage to the days when track racers would carry their fast wheels to the velodrome and change them over for racing. 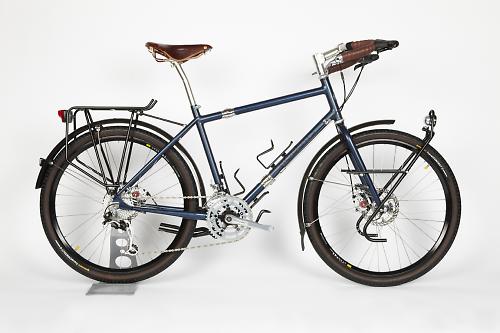 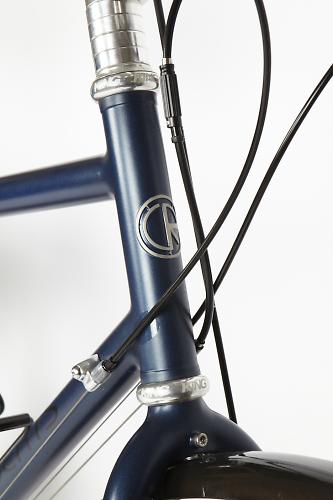 The judges agreed that somewhere in between pure road bikes and utility bikes there was the need for a new Bespoked prize for touring bikes; it is after all an enormous category for many enthusiastic cyclists even if no-one can agree whether they're called tourers, randonneurs or adventure crossers, which was the latest suggestion we heard. The judges including your's truly couldn't agree on a category name and they couldn't agree either on whether Roberts Cycles from Croydon with their long standing 'Rough Stuff' bombproof land cruiser should win it, or the 'Wanderer' from Winter Bicycles in Oregon with their fully internally-wired model. As the judges where already costing the organisers an extra bottle of Champagne for the new category and everyone was keen to crack on with the presentations, the prize went to both.

The two showed interesting variety in approach; Eric Estlund from Winter explained how his every commission is approached from afresh but that customers seem to like his lugs and on this show model he had tried a combination of True Temper steel tubes and lugs in a technique called 'bi-lamination.' Notice how the top and down tube flow - that's fillet brazing, that is -  into the rear of the head tube which is in fact a cutaway luglike sleeve into which which fits the real head tube. Lovely. And then there's the Roberts where he has used Columbus steel tubes beautifully fillet brazed everywhere - a Roberts trademark - and everthing as subtle as possible on this model. This 'Rough Stuff' format is one that's been in their pattern book for years and he says that mostly when people buy one they want it to be as black and understated as possible although he pushed the boat out with matt Navy Blue for this show bike: "no-one wants to ride into a village in the back of beyond on a shiny red bike," according to Roberts.

Anyway, no-one seemed unhappy with the judging although it remains to be seen what the public vote comes up with for Sunday evening. Will first-time UK visitor from Italy Pegoretti win the race in the repechage like Demon Frameworks did last year? Will Tom Donhou get the nod from the visitors? Don't miss your chance to vote. 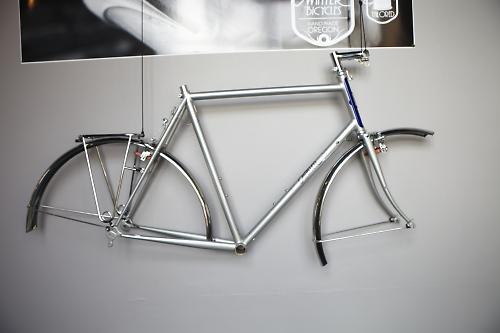