First up, the main pic up top is Britain’s David Millar adjusting the Shimano Dura-Ace brakes on his Cervélo R3. That’s a Garmin computer on there – an Edge 500, by the look of it – he’s on Team Garmin-Barracuda, after all. 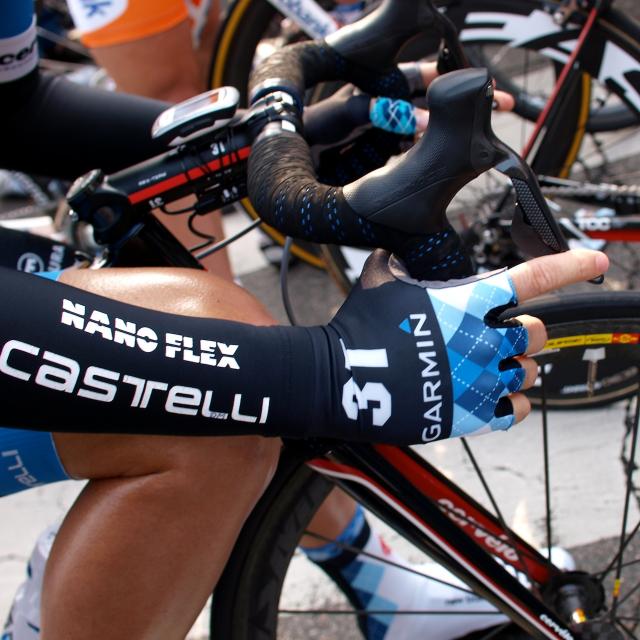 Check out the length of that 3T ARX-Team stem. It has to be 130mm, maybe 140mm. Nearly all the pros like to run a long stem, even the guys who are way shorter than 6ft 3in Millar. 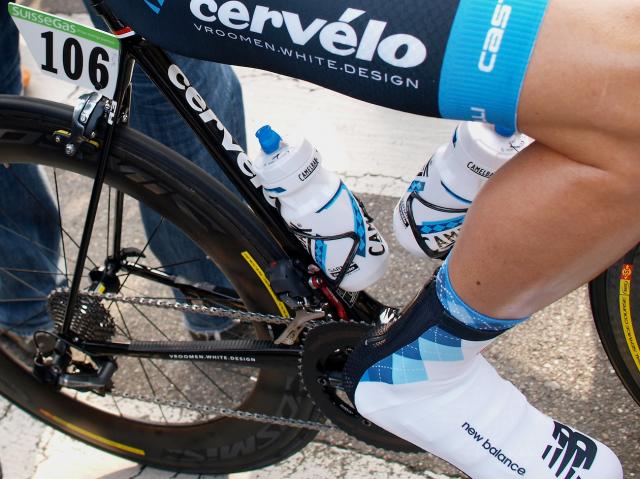 Garmin-Barracuda are sponsored by Shimano but Millar uses O.Symetric non-round chainrings designed to remove dead spots from the pedal stroke. The mechanics have blacked out the graphics but the shape is distinctive. This is the Cannondale SuperSix Evo belonging to former Vuelta a Espana winner Vincenzo Nibali of Team Liquigas Cannondale. 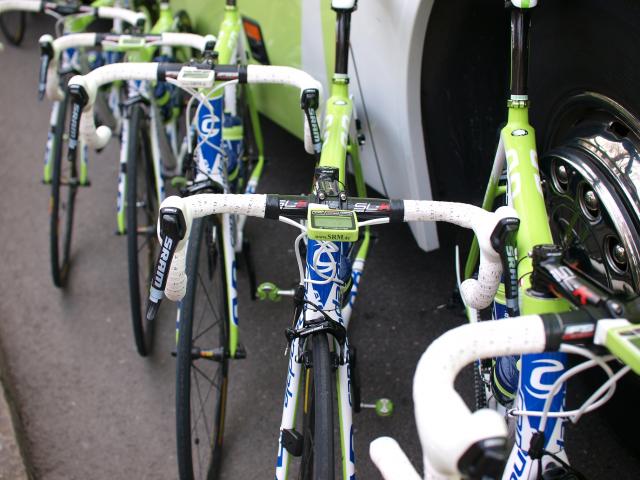 Most of the Liquigas riders go for the alloy FSA SL-K stem rather than the carbon K-Force Light, and they use Speedplay Zero pedals in the team colours. Those are last year’s SRAM Red brake callipers rather than the new model that was launched last month. Project 1t4i, formerly Skil-Shimano, is a Dutch team that races on Felt. That’s an F-series frame belonging to German rider John Degenkolb, with an external bottom bracket rather than a BB30. Along the top tube there’s the mission statement: “team spirit • inspiration • integrity • improvement • innovation”. That helps explain the team name - one word beginning with 't,' four starting with 'i' - geddit?

Degenkolb, who finished fifth in Milan-San Remo despite being aged just 23, has gone to town with the shifting options. As well as the normal Di2 electronic shifters he has the climbers’ satellite option up top and you can just see the sprinters’ option on the drops. 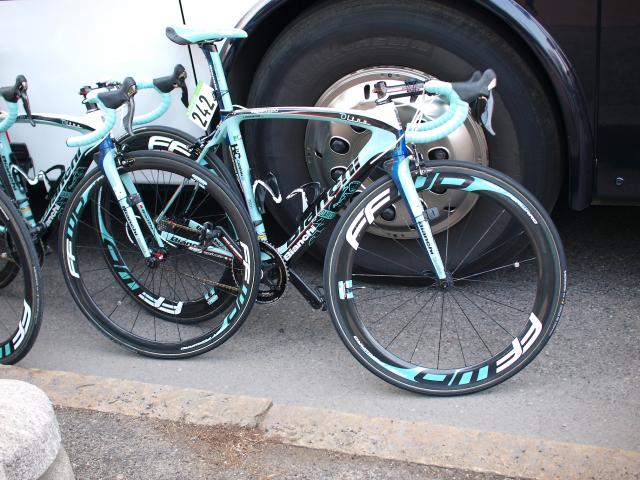 This is the Bianchi Oltre belonging to Johnny Hoogerland of the Netherlands, the rider who famously ended up in the barbed wire fence at last year’s Tour de France. With a long stem slammed right down on top of the head tube, it’s the definitive pro setup. Although that FSA OS-99 stem has a carbon surface, it’s 7050 aluminium under there Those are FSA Gossamer brake callipers. There are FSA bars, stems and seat posts all over the place in the pro peloton but the brakes don’t get so much of a look in; Shimano, SRAM and Campag usually provide them. The wheels are DT Swiss 240 hubs laced to Fast Forward rims in various depths.

This is another Bianchi, this time the Sempre belonging to Frank Osorio of new team Colombia-Coldeportes. He’s running FSA Gossamer brakes too, an FSA K-Force Light chainset, and and FSA front mech, but the shifters and rear mech are SRAM Red. The yellow, blue and red flashes on the fork and chainstays represent the Colombian flag. It’s a Colombian team based in Italy, the entire roster comprising Colombians. 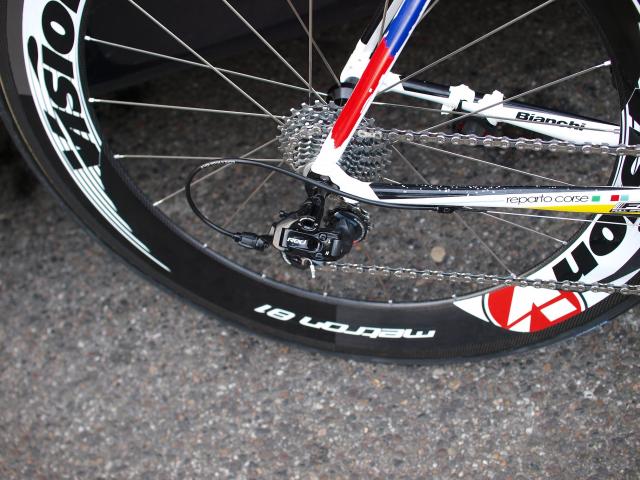 The rear wheel is the new Metron 81 from FSA sub-brand Vision. It’s a 2013 product and won’t be available to buy for several months yet, although we took the wheels for a spin in Majorca last month. The TC50 front wheel is in the current lineup, the 50 referring to the rim depth in millimetres. 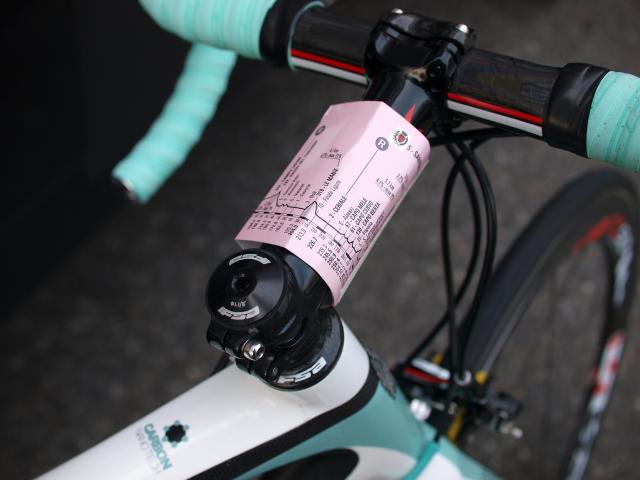 That’s the Milan-San Remo profile map wrapped around his stem. Forewarned is forearmed. 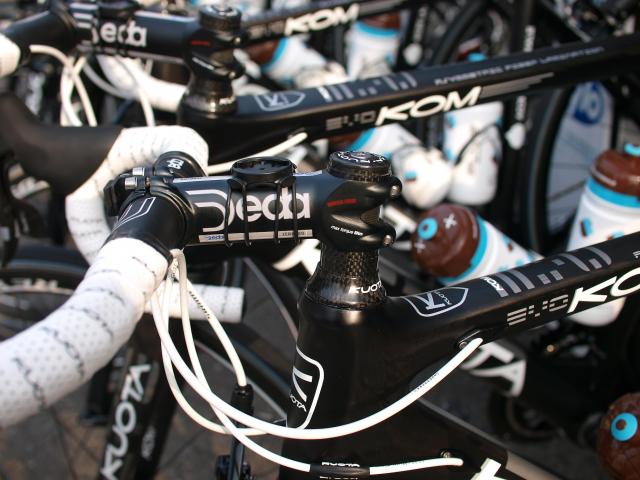 What’s this, though? Headset spacers? A short stem? The pro cyclists’ union will be down on Sébastien Hinault like a ton of bricks. The same goes for Kristof Goddaert next door. The AG2R bikes might look great but that brown kit… we’re guessing they don’t sell too many replicas. 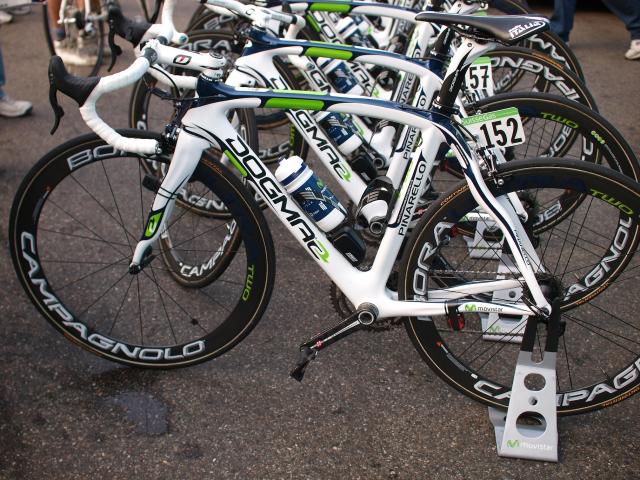 Like Team Sky, Movistar are on Pinarello Dogmas but with Campagnolo EPS electronic shifting rather than Shimano. This is the mount of Andrei Amador Bipkazacova or Costa Rica. If you don’t recognize the stem, it’s Pinarello’s Most Tiger Ultra alloy/carbon model. The Pinarello Most Xylon bars are alloy/carbon too. 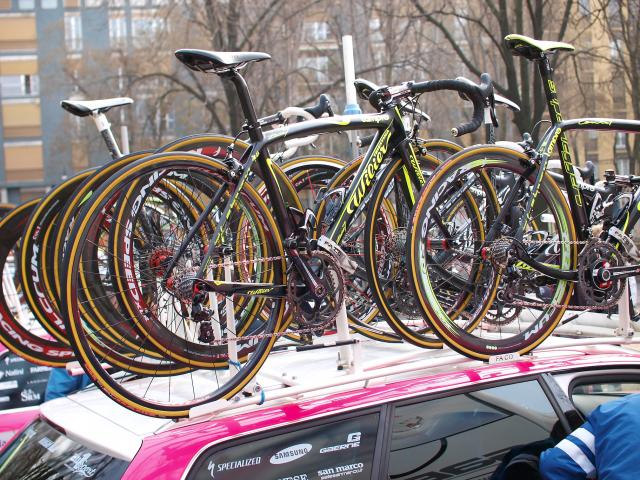 That’s a Wilier Zero 7 up there on top of the Lampre car – so called because each frame weighs sub 800g – hence 0.7-something kilograms. 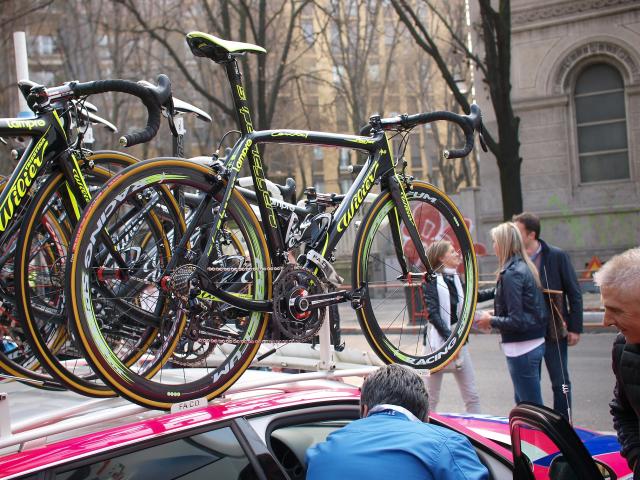 And that’s a Cento 1 with the curved down chainstay on the driveside, this one belonging to former Milan-San Remo winner Alessandro Petacchi – you can just make out his nickname, Ale-Jet, at the front end of the top tube. The chainstays are asymmetric to take account of the differing forces on either side of the bike. Lampre use Campagnolo groupsets and wheels from Campag’s sub-brand Fulcrum. 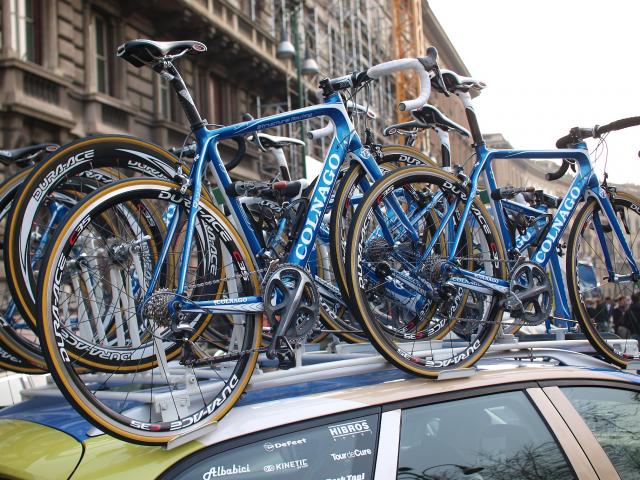 These are Team Type 1’s Colnago M10s in a lovely retro blue. Those Shimano Dura-Ace C35 wheels are the clincher version an alloy brake tracks. Up there on the top of the car with no numbers attached, these are the spare bikes rather than the race mounts.