£1,929. That’s how much this Shimano Ultegra Di2- equipped Canyon costs, by far the cheapest bike we know of from any of the mainstream brands to come equipped with electronic shifting. This looks like killer value.

Some people will doubtless be put off by the fact that the Ultimate AL’s frame, as the name suggests, is aluminium – but we’d urge you to look beyond that. There’s a belief in some quarters that carbon bikes are necessarily better than aluminium bikes but, as we often pointed out, you get good and bad bikes made from any material. Carbon isn’t inherently superior, even for lightweight performance bikes. 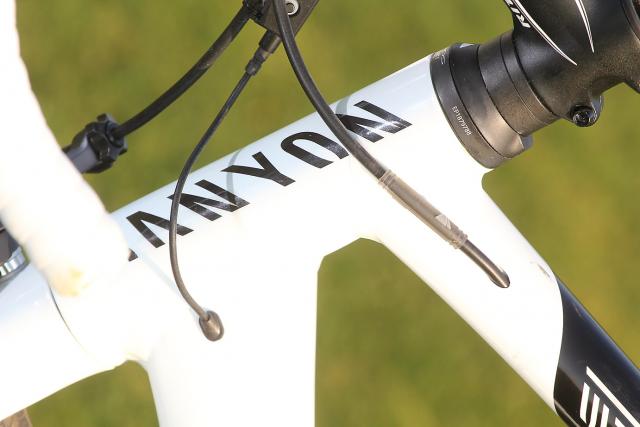 The Ultimate AL frame comes with a tapered head tube that houses a 1 1/4in upper bearing rather than the usual 1 1/8in, and a 1 1/2in bearing at the bottom. The idea is to spread the load more evenly and stiffen things up.

While we’re having a gander at the front end, the Ultimate AL features Canyon’s i-Lock headset system which eliminates the need for an internal bung inside the fork steerer tube. Rather than tightening a top cap to preload the headset bearings, you push down on the stem and tighten it in pace, then you remove any play from the headset by tightening a tiny torque bolt. It’s designed to eliminate the chances of you damaging the fork steerer. 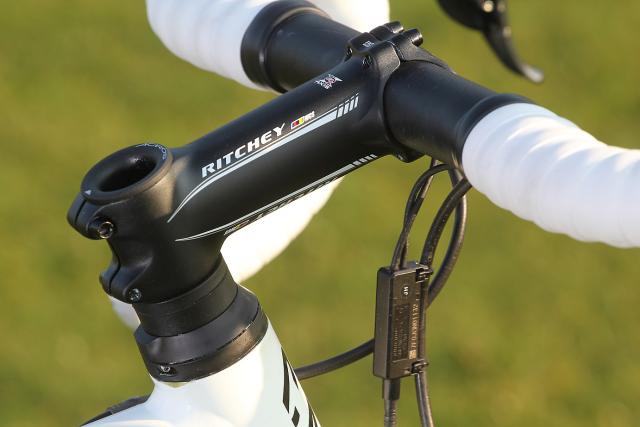 The seat tube is made to Canyon’s Maximus design meaning that it bulges out towards the bottom on the non-driveside to add extra stiffness, but doesn’t on the driveside where you need the space for the chainset. Canyon reckon this increases the lateral stiffness of the frame around the bottom bracket by 30% compared to a round tube.

Cervélo use a similar design – so similar that they had a legal battle with Canyon about it before coming to an agreement. They didn’t make the full details of that settlement public but both manufacturers are still able to use their existing designs. Canyon are big on their VCLS technology, VCLS standing for Vertical Comfort, Lateral Stiffness. So, those skinny seatstays are designed to absorb vibration and lessen muscle fatigue while the VCLS seatpost contains basalt fibres within the carbon lay-up to provide extra flexibility. That post is a comparatively narrow 27.2mm diameter in order to provide more damping that one with a larger cross sectional area. The cables all run internally keeping everything neat and tidy while the Di2 battery is tucked away under the left hand chainstay. Speaking of Di2, the electronic shifting is bound to be the biggest draw here. A sub-£2000 bike with Ultegra Di2 is big news (the price varies according to the exchange rate, by the way; it could be slightly different if you go to the Canyon site to check it). We’ve used Ultegra Di2 quite a bit now and in function it’s indistinguishable from the twice as pricey Dura-Ace version. You’ll probably have your own opinions on whether electronic shifting is a step forward or not so we won’t cover that ground again here, but the headline facts are that you get fast, accurate shifts and the front mech automatically adjusts its position according to the sprocket you’re using in order to avoid chain rub. We’ll go into more detail when we write the review. You might have thought that in order to get Di2 on a bike of this price, Canyon would have to spec low-grade components elsewhere, but that’s not the case. The brake callipers and chainset are Ultegra (you can go with either standard or compact chainrings), the wheels are Mavic Ksyrium Equipes and the tyres are Conti Grand Prix 4000 S. The saddle is from Selle Italia and the cockpit components are aluminium WCS options from Ritchey. In other words, it’s high-quality branded kit throughout. 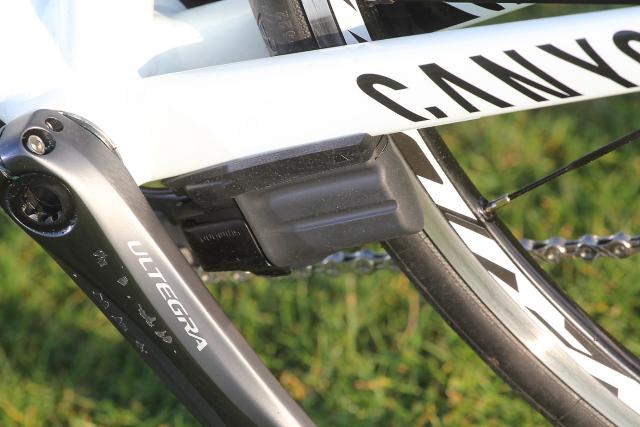 We’re really looking forward to reviewing this bike because we had our first ride at Eurobike last year and early indications were good. We now need to see how it performs on the less than perfect roads we get over here, which means I have a top excuse to get out there in the spring sunshine right now.

If you want more details before our review is done, head along to www.canyon.com.