Electronic shifting trickles down to second-tier... and we've taken it for a spin
by Mat Brett

We’ve just had our first ride using Shimano’s new Ultegra Di2 digital shifting and here’s the big news: in terms of function, you really can’t tell the difference between this and the twice as expensive Dura-Ace version.

We’re currently out in Switzerland where Shimano are letting us press layabouts play with the new equipment for the first time. They showed it to us ages ago, but now is the first time we’ve actually had the chance to give it a go, and initial impressions are excellent. 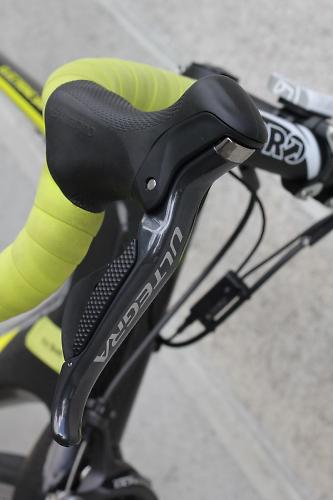 The Ultegra dual control levers are the same shape as the Dura-Ace ones and the shifting action is exactly the same too. Shimano describe it as, “Light and easy, like clicking a mouse,” and that’s about right – upshifts and downshifts are each achieved by pressing one of the levers tucked behind the brake levers a matter of millimetres. 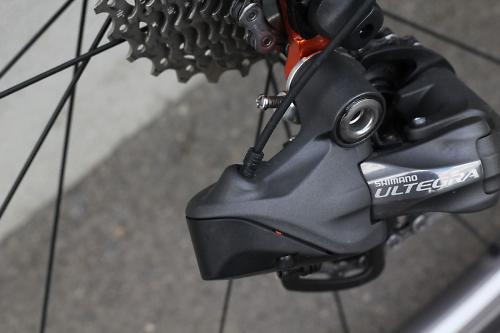 The rear mech is the same shape as the Dura-Ace version too, and it comes with a crash saver function that disconnects the motor if you stack to prevent further damage. It can handle a maximum sprocket size of 28-tooth, and you can pair that up with a 52-39T or 53-39T chainset, or go for a compact 50-34T option for a low set of gear ratios to get you up the steep stuff. 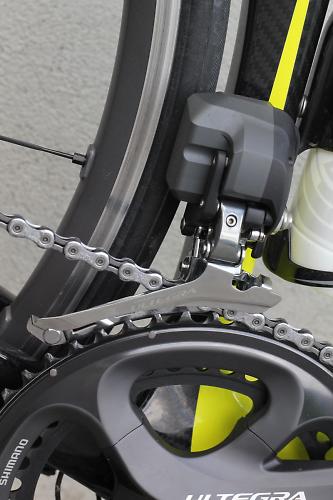 The front mech offers quick, silent shifting and it’s been perfectly accurate so far. Shift across the cassette and it’ll automatically adjust to avoid any chain rub, even if you’re on the big ring and big sprocket at the same time, or small and small… Not that you’d want to do either, but if you do, the system won’t go mental on you. 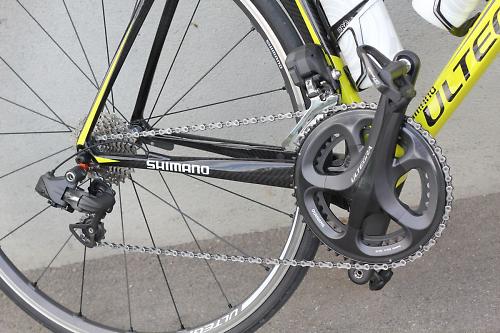 Two of us (Mat and Dave) have both spent precisely 1:15hrs each on the new Ultegra Di2 so we’re not saying these are anything other than initial impressions so far, but we did our best to confuse it with multiple shifts in each direction, changing front and rear at once, changing under heavy pressure out of the saddle… everything we could think of, and it didn’t care a bit. It seemed to be saying, “Pah! Is that all you’ve got?” It really is incredibly smooth and effortless.

We’ll dream up some more hardcore stupidity tonight to try out on tomorrow’s ride, though. That’s what we do best. 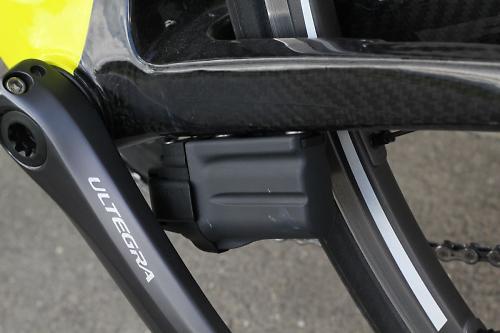 The Ultegra Di2 battery is the same as the Dura-Ace one, and it’ll give you upwards of 625 miles (1,000km) of use per charge. It’ll depend on how much shifting you do, obviously, but in reality you’re likely to get maybe three times that distance before you need to juice it up again from the mains. 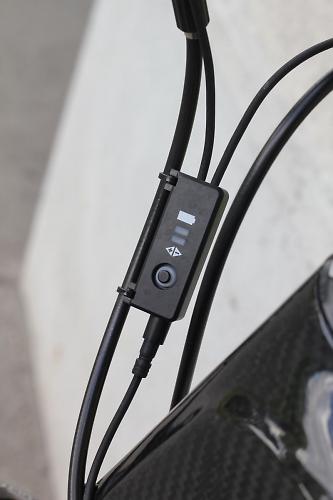 There really is no reason for you ever to run out of power unexpectedly. Battery indicator lights tell you how much is left in the tank and you get tons of warning before it actually runs out. Even then, the front mech stops working before the rear to give you a sporting chance of getting home with your quads intact.

The Ultegra Di2 system weighs a little more than the Dura-Ace but really not much more – 2,482g complete, against 2,219g. A Dura-Ace mechanical set-up, for comparison, is a little lighter again at 2,149g, while an Ultegra mechanical system is 2,402g. 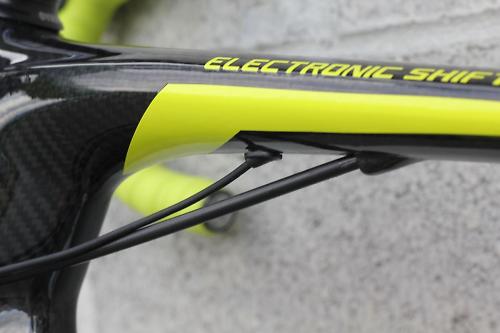 The other difference between Dura-Ace and Ultegra Di2 is in the cabling. The Ultegra version uses what Shimano are calling Etube cables which have two core wires instead of Dura-Ace’s four, a smaller diameter (5.1mm) and smaller connectors. That means that Dura-Ace and Ultegra are not compatible; you can’t run Dura-Ace shifters with Ultegra mechs.

The skinnier cables means that manufacturers can use smaller holes in their frames for running them internally… Not that you have to run the cables internally, you can fit them externally if you fancy making the change from mechanical to digital shifting on your current bike. 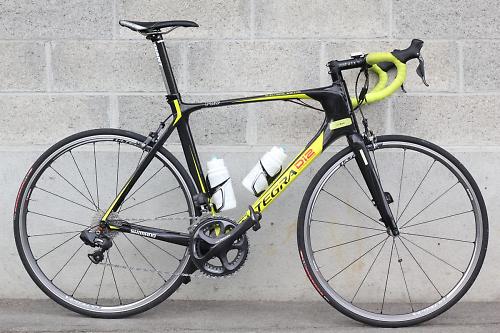 Shimano reckon that setting a bike up with Ultegra Di2 is easier that fitting a mechanical system. We’ve not tried it so we can’t comment on that. They also say that the connectors are immediately waterproof – you just plug them in and that’s it. We can’t comment on that either because the weather’s pretty good out here in Switzerland, but there are a few dark clouds coming in over the mountains so maybe we’ll find out in the morning.

Okay, so now two of us from road.cc have had a bit more time riding with Ultegra Di2 I’ll update and clarify a few things. We’ve each spent about 6hrs using the system and ridden up and down a couple of fairly big Swiss mountains. That’s nowhere near enough time for a full test, but enough to get a feel for it. See Dave’s story too.

The battery and control box

Worries about running out of juice are groundless. If you can keep a mobile phone topped up or put fuel in your car, you will be able to cope. You’ll have weeks or months of leeway here.

Shimano reckon the recharge time is about 90mins and they guarantee 500 charges per battery so you should never need to change it.

Shimano have a new diagnostics system for the Ultegra Di2 system, although the price (yet to be confirmed) means it’ll probably only make economic sense for shops to own it. It’s a user interface that loads onto a PC. You connect your bike to the computer via a cable from one of the shifters and it’ll diagnose where any problem is in the Di2 setup.

I can’t imagine too many people moving to left-hand rear-mech shifting. If Shimano didn’t offer that, they could have just one button on the left-hand shifter that moved you to whichever chainring you're not currently in. They actually have two buttons, so you need to remember which is for upshifts and which is for downshifts. Loads of people kept forgetting on our test rides, but I imagine it would become automatic after a few days. Also, maybe a development of this system will allow Shimano to offer Di2 as a triple chainset option in the future… although that is speculation.

Shimano reckon Ultegra Di2 is completely waterproof. They say it’ll be fine even if you’re driving along the motorway in the rain with your bike attached to a rack.

Exact prices have yet to be announced but Shimano tell us that Ultegra Di2 will be cheaper than mechanical Dura-Ace… although we’re not sure if that’s for just the electronic shifting system or for an entire groupset. In other words, Shimano haven’t told us whether savings made on Ultegra brake callipers over Dura-Ace equivalents, for example, are used in this calculation to produce a lower overall price than mechanical DA, or whether it’s like-for-like on the shifting system only. We’re trying to get that clarified at the moment.

We’ve had a few people ask why you need Di2. The answer is that you don’t, and we’re not here to convince you that you do.

I would say that individual shifts using Di2 are a little easier than using a mechanical setup. Of course, shifting using a mechanical setup isn’t hard in the first place, but touching a button is a tad simpler than swinging a lever across, especially when you’re out of the saddle and giving it full beans. It’s like the difference between using, I don’t know, Shimano’s RapidFire shifters on a mountain bike as opposed to old-style thumbies… It’s not going to change the way you live your life, but it’s just a touch easier. You don’t need power-assisted steering in a car, but it makes life a little bit easier.

Multi-shifts across the cassette on a Di2 system take a bit of getting used to. Rather than one long sweep of a lever, you have to tap the button several times. You get used to it pretty quickly though… and most of your shifts will be one sprocket at a time anyway.

Could Di2 break and leave you stranded miles from home? It could doubtless stop working, particularly if you crash – things do – so in theory you could find yourself riding home on a singlespeed. So if you don’t think Di2 is for you, fine. Shimano really aren’t going to stop doing mechanical-shifting any time soon; you can rest assured on that one.

Here’s Shimano’s full rationale as given in their recent press release:

Professional riders have been using the Shimano Dura-Ace components with Di2 electronic shifting technology in the biggest races in the world over the past four years: over the highest mountains, in the most extreme weather conditions and over the worst possible roads and cyclo cross tracks. Now it is time to introduce this revolutionary technology into Shimano Ultegra, making it available to a much wider group of road racers and enthusiasts.
The advantages of Di2 (Digital Integrated Intelligence) are clear for everybody who has tested it: changing gears becomes easier, effortless and faster by simply touching the shift buttons. Control at the tip of your fingers. Additional benefits include an automatic trimming front derailleur, unmatched precision plus super easy installation and adjustment.
Shimano Ultegra 6770 series with Di2 technology consists of Dual Control Levers, electronically operated front and rear derailleurs, a battery and electric cables. For the remaining components – like Hollowtech II crankset, brake callipers, cassette sprockets and chain – you can rely on the products of the mechanical Shimano Ultegra 6700 component group.
The electric cables include only two core wires (Dura-Ace Di2 has four) and the connectors are smaller too with a diameter of 5.1mm (-3.7mm compared to Dura- Ace Di2). Easy plug and play system to connect the cables, which will be available in different lengths to accommodate most frame dimensions.
Connection with PC for diagnosis and changing the shifting order: The SEIS (Shimano Electronic Intelligence System) is based on the Shimano Index System (SIS) that has proved its superior gear changing characteristics over the years. The big difference is that in this case, the shifting action is provided for by electronics instead of mechanics.
Ultegra 6770 products will exclusively become available in the new glossy grey colour. The products are not compatible with Dura-Ace Di2.