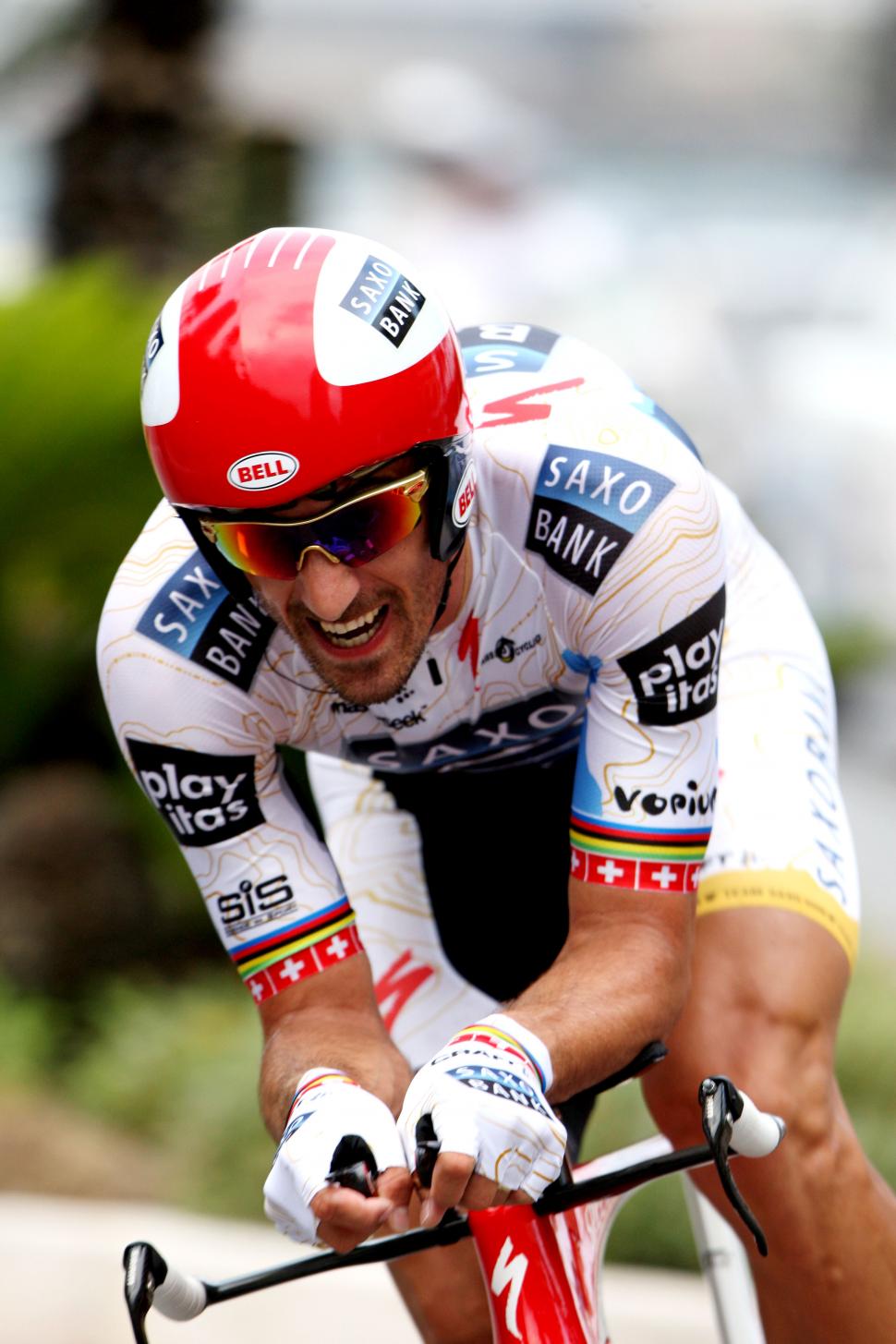 Cancellara wins the stage, but Contador makes a point
by Tony Farrelly

As widely predicted Fanian Cancellara (Saxo Bank) stormed to victory on a tricky technical course Tour Prologue course in Monaco today knocking almost 20 seconds off the previous fastest time, which had only just been set by British rider Bradley Wiggins to come home in 0:19:32. But if the stage belonged to Cancellara, the Astana team put down a big marker for their rivals with an impesssive display of strength in depth with four riders placing in the top 10, including Lance Armstrong in 10th place.

When Alberto Contador started his ride, third from last, his teammates Andreas Kloden and Levi Leipheimer were in first and second place respectively. The were fifth and sixth in the final placing with Contador riding a leader's race to finish second in 0:19:50. Contador was the fastest man on the day through the 5Km checkpoing beating the time set by Tony Martin (Columbia HTC) much earlier and putting five seconds into Cancellara.

However as Contador's teammates, Kloden and Leipheimer, had already shown this prologue was all about the second half and its long descent and tight turns in to the finish. The course favoured the best bike handlers capable of taking biggest risks on the descent and through the bends – Cancellara once again gave a masterful display of bike handling skills in a Tour Prologue to claim the first stage and the first yellow jersey of this year's Tour.

Contador won't be too disappointed to lose to Cancellara a rider who is unlikely to trouble the Spaniard in the mountains, he will be pleased to have put a few seconds in to Cadel Evans who also rode an impressive stage and that any questions about who should be the leader of the Astanta team have been answered in emphatic style with the 21 seconds he put into his team mate Lance Armstrong.

Defending champion Carlos Sastre finished in 21st place 1:06 down on Cancllara and more importantly for him 47 seconds back on Condator. The Spaniard is not a time trial specialist, he will be making his mark in the mountains, his problem may prove to be that so will Contador.

Wiggins was the pick of the British riders with a superb ride to claim a place on the podium only being edged out of second place by Contador's one second advantage, David Millar finished in 14th place and suffered a sticky moment locking both wheels going through a corner. Charly Wegelius started his Tour with a ride to 92nd place while  Mark Cavendish eased himself in coming home in 177th.

Tomorrow brings a completey different test with a stage for the sprinters, 182Km from Monaco to Brignoles and although Mark Cavendish was playing down his chances – it's a fairly lumpy ride in he should be there or thereabouts when things hot up in the final 500m.